Don’t be fooled by the ultra-Aussie rhetoric: the Coalition's actions show contempt for Australia’s most beloved institutions and national symbols.

Stone the flamin’ crows! Urgently seeking a rebrand, PM Scott Morrison is upping the ridgy-didge Aussie schtick, sculling a beer at the cricket in Canberra, eating meat pies in regional Queensland, and saying “fair dinkum” enough times to irritate even the fair-dinkumest Aussie patriot. Morrison has form in bastardising slang, having overseen Tourism Australia’s “where the bloody hell are ya?” campaign as Australia’s former tourism tsar.

Bernard Keane believes ScoMo represents “the distillation and crystallisation of the worst aspects of modern Australia”. But Morrison not only exemplifies the worst of Australian culture; he also fails to represent the best.

There are many shameful strains in our country’s history. But we also inherit many landmarks, customs, institutions and symbols that rightly inspire national pride. When unconstrained by dinky-di parochialism, these cultural artefacts warrant inclusion in a progressive national mythology.

Unfortunately, long before ScoMo began amplifying our crudest national pastimes, the Coalition were busy denigrating the Aussie icons most deserving of public esteem.

Here are just a few of the valuable cultural assets the Coalition have undermined.

The reef is one of Australia’s most incredible natural wonders, and a $56 billion tourism asset. Yet under the LNP’s do-nothing approach to climate change and sustainability, the northern half of the reef has faced devastating coral bleaching, which threatens its long-term viability.

The government’s widely derided Reef 2050 plan fails to even acknowledge climate change. The government also maintains support for the Adani coalmine, which will undoubtedly impact the reef’s long-term health. The government’s main effort to assist the reef involved giving $443 million to a shady foundation manned by mining interests.

Australia is home to some weird and wonderful animals. The Duke and Duchess of Sussex recently patted a koala on their royal visit, though the British press protested their inability to cuddle the furry creatures. Probably best to keep one’s distance, given that 50-100% of our rapidly depleting koala populations have chlamydia after the government comprehensively failed to protect the threatened species.

Critics have derided the government’s “strategy for nature 2018-2030” as a “global embarrassment” which “reads like a Year 10 school assignment”. The plan strips all specific targets in favour of vague, untraceable objectives, ensuring zero accountability for their ongoing neglect.

Whether or not it is acoustically functional, the Opera House is a world-renowned feat of modern architecture. ScoMo genuflected to our colonial overlords Harry and Meghan beneath the iconic sails, a week after allowing them to be publicly vandalised by gambling advertising, and described the building as “the biggest billboard Sydney has”.

The public backlash was swift and significant.

Our national mythology prizes the bush and outback landscapes, which are intrinsically linked to 60,000 years of Indigenous history. Despite our collective failures to Indigenous people, Indigenous icons such as Uluru, the boomerang and dot paintings should be considered integral parts of our cultural cannon.

Unfortunately, Indigenous artists are struggling to make a living from their cultural products such as paintings and boomerangs due to an epidemic of foreign-manufactured fakes, which the government has been slow to act upon despite pressure from Indigenous Australians and MP Bob Katter. Add their comprehensive failure to “close the gap”, and this government has been especially disappointing for Indigenous people.

Towards a Progressive Patriotism

Celebrating our nation’s admirable traits should not excuse or overshadow points of collective shame, such as our unpaid debt to Indigenous people, inhumane incarceration of innocent asylum seekers and our frequent proclivity to racism and bigotry.

But if we do not propose a positive, inclusive national image, we vacate the field to divisive, exclusionary alternatives. With Pauline Hanson and her Coalition allies recently supporting a flagrantly racist image of Australian identity in Parliament, we desperately need progressive national symbols to rally around.

Yet conservative politicians are failing to responsibly conserve our nation’s story, with the lavish exception of the ANZAC memorial. I doubt the Coalition is deliberately seeking to strip the meat from the bones of Australian public culture. But in true neoliberal fashion, they have sublimated too many national treasures to more profitable or expedient priorities, which has cumulatively diminished our cultural canon.

ScoMo can unconvincingly play the part of Aussie larrikin until his government’s impending electoral demise, but the conservatives cannot profess true patriotism until they drop the tired, convenient clichés and proactively invest in the cultivation of an Australian identity of accessibility and substance.

If our government is unwilling to nourish the public symbols which conjure an imagined community, let alone confront its problematic elements, at what point do we conclude they are simply un-Australian? 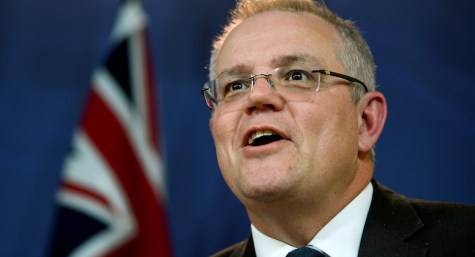 Morrison wants love and unity, and some culture wars too

Parliament reports on indigenous tongues: can they be saved?

Yep and if you broaden the list beyond “cultural assets”, the number of complete fuckups, stumbles and general shenanigans are too numerous to manage without creating a new unit of measure…perhaps dBcfuk would suffice

Unfit to govern on so many fronts…the only redeeming feature of the LNP is that they are not yet as bad as the GOP in America.

Benjamin Clark’s critique would be rather more forceful if he used the PM’s full name, rather than the cutesy version that diminishes the office (regardless of the holder) … #NoMo ScoMo

Speaking of Australian colloquialisms, are you referring to ‘Scott Morrison – Dickhead in Charge’?

So it’s not only locals who compromise cultural icons for questionable short term commercial aims (as if Perth needs another coffee shop!), but some of our overseas investors are complicit too. The likes of Frasers enjoy making money here in a stable and low-risk environment, and even the remote likelihood of damaging a cultural asset should make them run a mile.

The major tenant of Central Park, Rio Tinto, has a much keener appreciation of how carefully its social license to operate in WA needs to be guarded and nurtured.

Friday filler coz everyone else has bunked off for the w/e.