Australia's most frequent job-seeker has teamed up with Australia's least loyal employer. This should end well.

After months of speculation, former Labor leader (well, former a lot things) Mark Latham has confirmed he’s joining Pauline Hanson’s One Nation. Latham will stand as a One Nation candidate for the upper house at the next New South Wales election.

So, the woman who could not bear to share the spotlight with a figure as charismatic, outspoken and high-profile as Brian Burston has hired one of the few men who have been able to talk too forcefully for Sky After Dark to keep them on. Wondering how this will go? Let’s take a look at the last few years in the lives of one of Australia’s most frequent job-seekers, and one of Australia’s least loyal employers.

We can skip his troubled exit from the Labor leadership — 2015 is when Latham really made a habit of losing gainful employment.

Latham worked for the AFR as a columnist for years, but attracted wide condemnation in 2015 after directing significant criticism to domestic violence campaigner and survivor Rosie Batty (whose son was murdered by her husband) for taking paid speaking roles as part of her campaigning, and referring to transgender cricket commentator and Army reserve group Catherine McGregor as “he/she”. Though his editor publicly defended him, Latham eventually resigned.

OK, so Latham wasn’t precisely an employee of MWF, but it’s fair to assume that after his grotesque, profanity-strewn performance at the 2015 Melbourne Writers’ Festival a few days after he left the Fin, he’s not being asked back. Ditto The Verdict — the panel show he starred in, notable for its confirmation that he was indeed behind the harassment of Batty via @RealMarkLatham and his defence of the word “negro”. It was cancelled after eight episodes.

Latham continued with his fixation on Batty and domestic violence in general. In 2016, there were calls for his sacking from a Triple M podcast for repeating his accusation that Batty was cashing in on the death of her son, and going a step further, describing domestic violence as a “coping mechansim” that men turn to when they have “lost their self esteem”. Network head Mike Fitzpatrick made it clear that Latham’s involvement was “a one-off”.

Latham then landed where many hard-right figures of fading relevance come to rest on their way down: Sky News after 7pm. Latham set about attacking his colleagues Peter van Onselen and Kristina Keneally, ridiculing PVO’s wife’s role as a diversity officer and calling Keneally “Eddie Obeid’s protégé”. This wasn’t what did him in though — it took weird speculation on the sexuality of a high school student in an advert about gender equality to get him sacked.

After joining libertarian Bond villain David Leyonhjelm in the Liberal Democrats, Latham managed a relatively amicable separation by Latham’s febrile standards. He quit in September of this year (just over a year after joining), saying in a letter to the party that he had been “advised to run elsewhere”.

We’ve had to be slightly summary with our list of falling outs, resignations and firings — for a complete list of spurned former co-workers during the ’90s, check out Kerry-Anne Walsh’s Hoodwinked, or this piece from Amy Remeikis. Like Latho, we’re sticking to her last couple of years.

Nearly everyone in WA and Queensland

Hanson had a raft of candidates who either quit or were dis-endorsed by the party before the disastrous showing at the March 2017 state election in WA. This came as a result of them going up against the “brutal dictatorship” of Hanson’s leadership, and/or by being hilariously shambolic in and of themselves. Wouldn’t you know it, another raft of Queensland candidates suffered the exact same fate a year later.

Fraser Anning, before he became our very own Oswald Mosley, was most famous for being the most One Nation senator it’s possible to be — a man with fewer than 20 votes to his name, facing bankruptcy charges who was ousted from One Nation before he could even be sworn in.

Western Australia’s self-styled “Senator in Exile”, Rod Culleton could teach Latham a thing or two about losing your job, managing to do it in about four distinct ways. One of the earliest victims of the great section 44 purge, Culleton breached it twice. He not only violated sub section (iii) by being declared bankrupt in December 2016, but also breached (ii) on account of having been convicted of larceny — a charge that carries a sentence of more than a year.

That turned out to be irrelevant though. Five days before he was declared bankrupt, he resigned from PHON citing “un-Australian behaviour towards [himself] and [his] team”. Hanson, having told him she was the boss several times, on television, replied that he was a “pain in the backside” and she was “glad to see the back of him”.

The first signs that perhaps all was not well between Burston and his boss came earlier this year when Ten Daily‘s Josh Butler picked up that all One Nation references were being erased from his social media profiles. He was then ditched as party whip — a role he’d held since 2016. Things swiftly decayed from there.

Hanson tearfully accused Burston of stabbing her in the back on Sky — first by voting in favour of tax cuts she had recently supported, and then trying unsuccessfully to defect to the Shooters, Fishers and Farmers Party. Within days, he was gone.

How long do you give the happy couple? Guesses to boss@crikey.com.au. 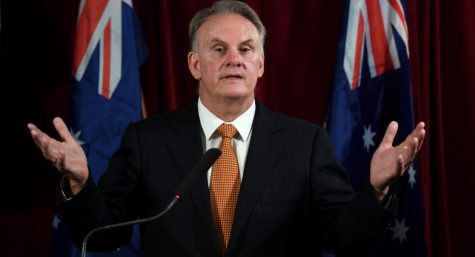 I predict this relationship will last longer than Mal Meninga’s political candidacy back in 2001. Just.

Touché! Twice as long perhaps! I wonder if they’ve consummated the relationship yet, like Oldfield back in the early days of the No Notion party. Is there anywhere for Latham to go after this? ‘Penthouse Australia’ perhaps!

I personally hope the relationship lasts for a long time, so they can really piss each other off, and in the meantime PHON support will continue to plummet.
PHON does provide a good service for Loonies with nowhere else to turn.

It’s not about the individuals – it’s all about staying on the media cycle – the Hanson circus always needs new stunts otherwise it risks becoming just a bad memory!

The idiocy of politics is bringing about cynicism in a way that we are getting pretty desperate for something we feel we can trust … not much .. so in the mind of many does it really matter who we vote for these days . The ticked off vote .. go to the polls and vote this “double irritation” in, but …

But this is still Australia, not America, and we have always been different, and with a political system that fortunately can’t throw up the likes of a Trump, as can be seen by the number of PMs we’ve had over the last few years. Our vote counts more, partly because it is compulsory, and therefore our political system is more democratic than America’s.

Till one day after the federal election. And that’s probably pushing it.

I’ve said it before and I will say it again. Latham is seriously in need of some medical intervention. I am now of the opinion that there is a 50/50 chance that an MRI scan of his head will reveal a large brain tumour which has been responsible for all the changes of the past few years. Remember, you read it here first.

The neocortex is the bit that does speech & thinking but the vast majority of the older (lizard) brain mass behind that does all the other stuff, like running the body, breathing, digestion etc.
It has often been pointed out that mad marky has no rear portion to his head, it is more or less flat behind/above the ears so it is possible that the neocortex has to spend too much time running autonomous functions that “rational behaviour” doesn’t get a look in?