As Victoria heads to the polls and NSW gears up for a March election, the contrasting records of the respective governments on public housing make for interesting reading.

In both states, the financial crisis-era stimulus packages saw thousands of new public housing dwellings built, funded by the Rudd government, particularly in NSW, where several thousand social housing dwellings were approved under the then-Labor government in the first half of 2010. Once the stimulus packages ended, however, both states cut back on new housing, until the Baillieu and O’Farrell governments again increased funding for public housing in their states. However, successive Victorian governments, including Daniel Andrews’, have run a distant second to NSW since then. 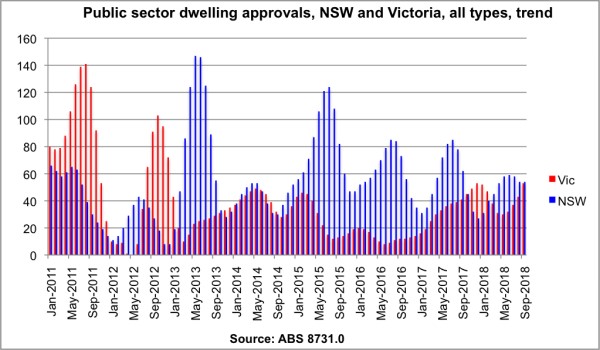 The O’Farrell/Baird/Berejiklian governments have had average of 55 social housing dwellings approved every month since coming into office, in trend terms. The Andrews government since late 2014 has only approved about half that, 28 dwellings a month. Nor can Victorian Labor blame the previous Liberal government: social housing approvals actually fell in Victoria across 2015 and 2016 and only began recovering to the levels of the Napthine government in 2017.

For much of 2016, the Victorian Labor government’s social housing policies saw monthly approvals barely into double figures. In NSW, approvals have come off the strong levels of 2015 and 2016, but have still been ahead of Victoria for most of the period since the start of 2017.

When it comes to building public housing, the data shows Liberals are the ones who get the job done.

I’m not surprised that NSW has been building more public housing…they’ve been selling off hundreds of acres of Housing commission suburbs in South Western Sydney to developers and putting up much smaller and much higher density housing elsewhere.
I think the idea that Baird and now Gladys are somehow heroes of the poor is a tad naive.

“Hey, I hate Daniel Andrews, let’s compare apples to oranges – NSW to Vic- and one piece of data that relies on a dozen other things – public housing APPROVALS – and say it makes the Libs better!”

What an incredibly shallow article, demonstrating only the usual journalistic ability to misuse statistics.

Seriously Keane, your blind hatred of state Labor in Vic and NSW makes you look a complete fool when it resorts in “hey, one state government approved less than a (bigger) state’s government in one term of office, a term where there was probably not a big pipeline of projects coming in because of do-nothing Bailieu, and where the trend is upwards as Labor has been able to create its own pipeline of projects to approve, therefore Victorian Labor’s record is ROTTEN”.

Put up or shut up, don’t produce smear pieces like this because you hate the guy.

Keane phoning it in again. Another great piece of Crikey ‘analysis’. Maybe you could put an ‘Exclusive’ on it as well.

“When it comes to building public housing, the data shows Liberals are the ones who get the job done.”

I suppose when you have tax policies so badly skewed against home ownership the need for public housing is bound to be greater especiallt in a State where house prices have run out of control for decades.

Did you take into account how much public housing they have sold of the the wealthy in the city Bernard? There is nothing and I repeat nothing good about the Liberals in NSW unless you are a partner in the big 4 accounting firms. They are as bent as they can be unless they are even more stupid and incompetent than their federal mates. I think myself they are just venal. Have a bloody good look Bernard.

We need much, much more public housing. Despite most State governments adopting economic fundamentalism, it will automatically be more affordable. However, Bernard is somewhat misusing statistics in this comparison – 55 v 24 is almost nothing v nothing.

Political contempt for public rental is frequently demonstrated. One such case was the Baillieu government saying it was not responsible for the private rental market, secondly, the classic spin-and-denial of “holding a review of Victoria’s public housing sector to prepare a strategic framework for social housing” after having announced millions of dollars in budget cuts to the Social Housing Advocacy and Support Programme.

None so blind as the Labphobic BK.
Seriously, has the man no shame?