In Australia: What Happened?, Ben Pobjie explores our country's humble beginnings as a cosy corner of the supercontinent Pangaea, to its current status as one of the world's most middling powers.

Australia has a rich and storied past, for a carefully defined value of all of those words. From its humble beginnings as a cosy corner of the supercontinent Pangaea, to its current status as one of the world’s most middling powers, Australia has endured conflict, doubt, depression, prejudice, and a general sense of boredom to emerge triumphant, or at least existent. To study this past is a noble endeavour, and students of Australian history will find much to delight and enlighten them in tales of our nation. From the exploits of Ned Kelly to the bravery of the Anzacs, from the statesmanship of Parkes to the unnatural interest in sheep of MacArthur, we are heirs to a magnificent heritage. But of what use is the study of the past, if we do not use it as a guide to the future? What good is knowing where you’ve been if you refuse to consider where you’re going? The historian’s calling is truly a wayfarer’s art, and that is why the story of Australia must include a forecast of what is to come. Herein we present just that.

As we have seen in recent years, the hot new political trend is getting rid of prime ministers mid-term. We can expect to see a massive increase in the frequency of this variety of figurative assassination going forward: for example, at the time of writing the prime minister is Scott “Happy Clapper” Morrison, who replaced Malcolm “Caviar-Flavoured Nipples” Turnbull in order to stave off a challenge by Peter “Ants In His Eyes” Dutton, in one of the most complex and simultaneously depressing palace intrigues of all time. Turnbull, who had become prime minister by deposing Tony Abbott because Abbott was too unpopular, was so unpopular that many of his colleagues believed that the only way to save the Liberal Party was to replace him with Peter Dutton, who was far less popular than Turnbull. In order to prevent this, other Liberals, concerned that Dutton was too unpopular to guarantee them success, moved to install Morrison, the least popular of them all, as prime minister. As a result of this, Julie Bishop, who was more popular than any of them, resigned; Tony Abbott, who was hoping that if everyone was confused enough he might be able to sneak into The Lodge without anyone noticing, got drunk and cried a lot.

It was a very different leadership swap than when Kevin Rudd deposed Julia Gillard because he was more popular than her, or when Julia Gillard deposed Kevin Rudd because she was more popular than him, or when Tony Abbott won an election because everyone was awful. No doubt it’s a pointer to the future, when lack of popularity will be no obstacle to anyone being made prime minister in order to arrest their party’s sliding popularity, and parties will strive to nominate their most despised members in the hope that voters will assume that the more despicable a human being obviously is, the better at their job they must be. It’s likely this will be the new normal, if indeed it is not already the old normal.

By 2030, both major political parties will be forced to unite in bipartisan commitment to increase the number of seats in the House of Representatives, in order that there will be enough MPs to supply the rotation of leadership in an average parliamentary term. By 2050, every living member of the Irwin family will have been prime minister at least once, and parents will urge their children to hurry home from school before it gets dark so they don’t get kidnapped and forced into Parliament.

The prime minister himself — or herself, although female prime ministers will be far less common after 2110, when an expenses scandal involving Prime Minister Geraldine de Silva will prompt a constitutional amendment to the effect that women “aren’t really suited to the job” — will have a very different role in the future. Before this century is out, the PM’s role will have evolved dramatically to be less about setting the policy direction of the government and representing the country on the world stage, and more about writing the weekly newsletter and keeping the Business Council’s glasses topped up.

As to policy, the future promises there will be less and less of it. It will probably be several decades before policy is actually outlawed, but it will be increasingly unpopular as time goes by. It is likely that what policy is formulated in the 2020s will be required to pass by plebiscite before being implemented, and each plebiscite result will itself have to be ratified by plebiscite, as democracy becomes more and more meta. Some will object that subjecting every new piece of legislation to a national vote of every citizen is expensive and time-consuming, but as these protestors will be, by definition, enemies of democracy, they can safely be ignored, and even more safely be jailed. Others might worry that the constant plebiscites make the legislative function of MPs somewhat redundant, but there will still be plenty for politicians to do, after Question Time is expanded to ten hours a day and every elected member is required to post on Instagram daily or face a byelection.

But what of race relations in the Australia of the future? Well, much like today, there will be no problems in this area whatsoever.

Finally, that most vexed of questions: national identity. Will Australians of the future truly understand what it is to be Australian?

The Australo-Russian War of 2023 will help a lot in this regard: as has been proven, there is nothing like war to inspire a nation to see itself in a more heroic light. Thanks to this new demonstration of Australian military excellence, the average Aussie will gain a new appreciation for the tradition of guts, determination and ability to skilfully pilot drones to strike civilian targets that is the birthright of every Australian.

But beyond this, as we move into a new phase of Australian history, the question of Australianness will be resolved by the synthesis of old with new, of heritage-revering traditionalist with past-disposing futurist, of old-school larrikin with new-age technocrat, of ancestor-worshipping cretin with rootless ignoramus.

Put simply, while we will always remember the rugged ocker of the outback who rode on the sheep’s back and camped by the billabong cooking damper and singing songs of the wild colonial boys; we will also feel just as much kinship with the whiny barista who is sponsored by a haircare company to Instagram his beard and only pretends to be gluten-intolerant because his mother never hugged him. In both these extremes, and in all the wonderful variety of dead-eyed cogs of capitalism’s blood-soaked gears in between, can be found the true soul of Australia.

In the end, whatever the future holds for Australia, what can be said for sure is that it will happen right where you’re sitting, and it will all seem strangely familiar.

This is an edited extract from Australia: What Happened? by Ben Pobjie (Affirm Press, $29.99), in stores and online from October 30. 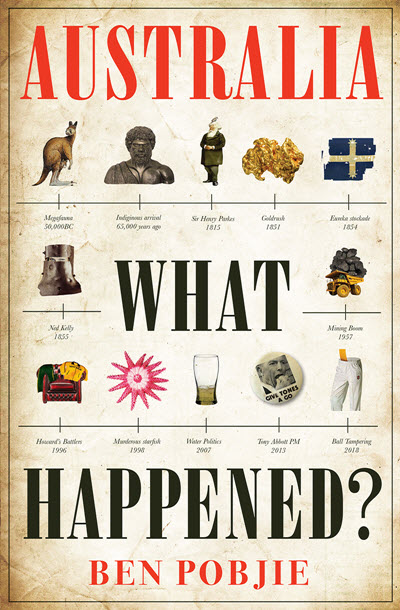 Welcome to the fish trap: Dark Emu and the radical difference of pre-1788 Aboriginal society

I don’t buy many books and this will certainly be one of them.

You have neglected to mention that as Australia is intent on pandering to the minerals council and ignoring climate change, by 2030, Australia will be relegate to 3rd world status. The future of the Great Artesian Basin, only source of groundwater for Australia (underlies 22% of Australia) is in danger. 70% of the basin lies in QLD where coal seam gas extraction has already shown to have caused dramatic negative consequences to bore levels. The Adani mine poses an even greater threat to groundwater.
In NSW proposed Santos Narrabri csg project will drill more than 850 holes through the GAB.
120 towns and settlements depend on the GAB for water supplies. We cannot sustain existence in regional Australia unless the GAB is protected and no mining or CSG extraction is allowed on any areas the overlay the GAB. Australia will become the Nauru of the 21st century.

It’s obvious, thanks in main to the mining industry, future generations of farmers won’t be able to rely on un-poisoned groundwater. Just as well solar and wind based technologies will make fresh water available for them.

Nicely detailed. Thanks for the reminder.

I moved
Reply to  klewso

Don’t worry it’s a cyber war, unfortunately the ruskies whip our arses. Apparently our copper wires were too slow.