How newsworthy is the end of the world?

Not very, according to Fairfax, News Corp and the ABC.

For most of yesterday, The Guardian’s Australian edition lead its website with news of impending doom for the planet, based on a World Wildlife Fund report warning of an environmental emergency threatening civilisation:

It finds that the vast and growing consumption of food and resources by the global population is destroying the web of life, billions of years in the making, upon which human society ultimately depends for clean air, water and everything else. 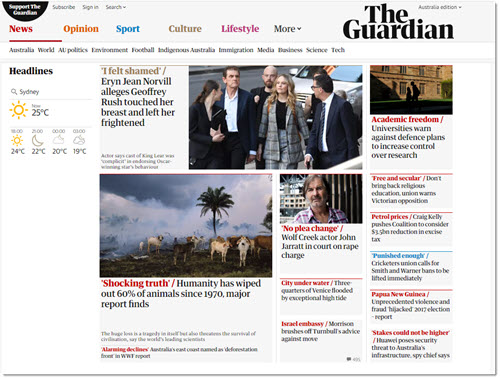 The report found that humans have wiped out 60% of the world’s animal populations since 1970, and WWF’s Mike Barrett didn’t pull any punches on the significance of the statistic: “This is far more than just being about losing the wonders of nature, desperately sad though that is. This is actually now jeopardising the future of people. Nature is not a ‘nice to have’ — it is our life-support system.”

Such dramatic news — with such colourful quotes — would surely be considered newsworthy by other websites?

But the story didn’t make the cut for its flagship 7pm news bulletin. Nor did it make it onto the commercial news bulletins in Sydney. Instead, their hour-long programs, and the ABC’s half-hour bulletin, included stories about the Duke and Duchess of Sussex’s Royal Tour continuing in New Zealand, court stories about Geoffrey Rush’s defamation action against The Daily Telegraph, a new hospital opening on Sydney’s northern beaches, crime stories, and petrol prices. World stories were about the Indonesian plane crash, Angela Merkel’s resignation and good video of flooding in Venice, but nothing broader about the climate and environment.

And what about our newspapers?

Nothing in today’s Sydney Morning Herald, The Australian, The Age, or The Australian Financial Review. Australia’s most-read news website news.com.au has the story with an Australian angle buried in its “world” section today, and it isn’t one of the site’s most-read stories. 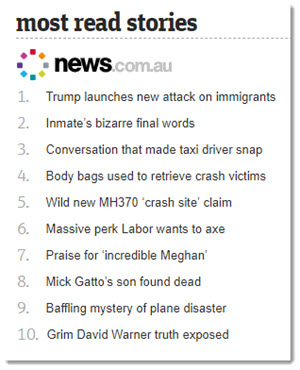 News Corp tabloids, though, including The Daily Telegraph and the Herald Sun, ran wire copy about the report from AFP buried on their world news pages.

So, we might be “sleepwalking towards the edge of a cliff” according to the WWF, but at least we know that Meghan’s team beat Harry’s in a “welly-wanging” competition in New Zealand.

Do you think this story should’ve gained more attention? Write to us at [email protected].

Thanks for pointing this out, Emily – depressing though it is. Yesterday I was caught in traffic and tuned in to ‘PM’ on ABC radio – something I stopped doing years ago because the superficiality was so aggravating. True to form, the first 15 minutes of ‘PM’ yesterday were about a celebrity actor in court claiming defamation and some scandal to do with cricket in Australia. So while we are rapidly and wilfully destroying the biosphere for our children and grandchildren, at least our celebrities won’t have to live with the threat of people saying unkind things about them and the cricket industry can continue to make good profits from the mugs who think it’s all about sportsmanship.

Basically, we are ‘screwed’

Abetz would have complained to ABC, so would Frydenberg. When will bloody morons who govern this world realise that we need to have less humans. Capitalism requires increasing. Even in New Scientist such clams are belittled by idiots who think they are economists. Which bit of one planet do they not understand?

Oh! Dear! Another Malthusian! Never mind the facts, there are too many of us! Then why don’t you set an example and get off of the planet?
If Australia were divided into 1000 sq mt blocks (square metre) we could house every individual on the planet. That is, one person per 1000 sq mt block. At this level there should be some land over. This would leave us with the whole of the United States, Canada, Mexico, and all the South American continent in which to grow your birdseed. You could use China and Russia for factories and Africa (about 30 million sq Kmsof it) as a playground. The rest (to keep the greenies happy) could be National Parks where only policemen could roams.
I’m not sure that this will convince someone that the world is NOT overpopulated. But with a basic understanding of maths anyone should be able to figure it out.
Some notes: 1. I am not putting this forward as a proposal – only as an example of the possible. 2. According to the WHO we produce sufficient food for 12 billion people.

P.S. The idea above indicates that there may be another cause for the “problem.” And as the major concern is what is happening to the land perhaps we should look there first! After all it was here before us!

You might want to read John Brunner’s old classic “Stand on Zanzibar”.

This is the thing… the consumerist approach that has overtaken society…people don’t want to hear the truth.. this goes back to a movie quote one of Jack Nicholson’s quotable, quotes…”the truth you can’t handle the truth,” sometimes these come back to haunt us in a big way.. I do suspect that this is about other often larger country’s, (with bigger populations) jumping onto the consumerist bandwagon… the problem with this is that our planet doesn’t have the resources or the ability to constantly expand with the limited populations that the first world country’s have had & the opportunities to take advantage of it, (in the past) because the trend is towards sustainability, reusing & recycling, but the message doesn’t seem to be getting through to larger populous country’s, (or those who think that it’s still okay to tear down forests at a great rate of knots to feed this beast) that are looking to build on an ever increasing middle & upper class, who want to be able to join in consumerisms deeply destructive patterns.. there’s no understanding around the fact that there are too many people on this planet (along with all the other introduced technology that is what is gonna be the downfall of the human being)….we’ve been through this so many times (on smaller scales)…human’s just don’t want to seem to actually learn…

Trouble is, the more real the threat and the higher the cost of doing nothing, the higher the shoulder-shrugging or the more stubborn the outright denial. To avoid the apocalypse, we have to stop doing most of the things we have been doing, and taking for granted, for centuries. This means a complete revision of our deeply entrenched ideas of economic activity, political democracy, and social interaction. And we need to start NOW. But how, with governments becoming increasingly dictatorial, and totally at the beck and call of corporations with a vested interest in keeping things as they are? We are using up the world’s finite resources at an increasing rate. But we still have people in high places who openly regard our environment as an adversary to be overcome, rather than as our home upon which we are totally dependent for our existence. It’s hard to be optimistic: perhaps that’s why the media avoids the issue!