Welcome to Side View — a curated guide to new and overlooked content on politics, policy, and public affairs. This week: white terrorists, free speech and its discontents, and Plato's pooch.

It’s hard to find anything new to say about the most recent wave of terrorism in the United States. Then again, some old things are worth repeating over and over: anti-Semitism has returned to American life with a vigour not seen since the 1930s. And why are we still reluctant to call terrorism by white men “terrorism”? Especially when even outside the US, right-wing terrorism is surging?

Which brings us to… 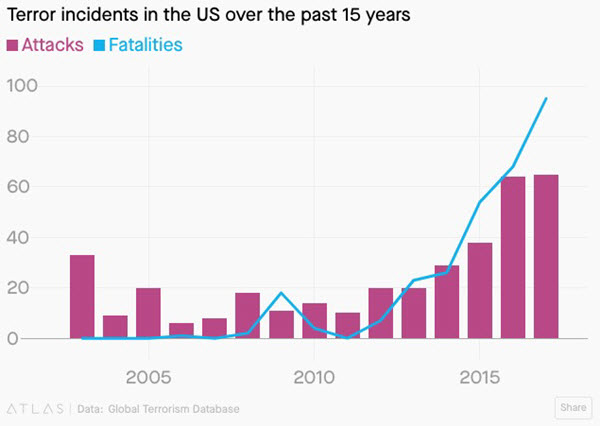 This increase is driven by growing, non-Islamic right-wing terrorism, which grew rapidly in the 2010s and, in 2017, became the largest source of terrorism in the US.

IT’S MARVELOUS WHAT THEY CAN DO THESE DAYS…

I don’t think this is quite the wonderful thing its inventors claim — drones that can drag objects 40 times their own weight –– by my calculation 20 of them could drag a human body. And speaking of weight, <insert “taking the piss” joke here>, presenting… bricks made out of urine.

VR is dead or, more accurately, was never really alive, while in this week’s Internet of Shit, General Motors monitored what drivers of its vehicles listened to and told advertisers, and if that makes you feel sick, you’re in luck — there’s a thermometer that tells advertisers to advertise medicine to you after it’s taken your temperature. Meanwhile, the claim that standing like Superman can change your life (I never knew this was a thing, but apparently it is) has been — unbelievably — debunked.

Cities accelerate evolution, though it’s (inevitably) more complicated than you think. Why different infrastructure design principles are needed to deal with climate change — it’s not just a question of more robust networks. And manna from heaven for us autonomous vehicle sceptics: don’t expect autonomous vehicles to solve congestion, like spruikers claim. In fact, they could make it worse, which means the French government’s decision to allow urban areas to introduce congestion pricing is a good idea.

So I recently joked about Diarmaid MacCulloch not understanding that Hilary Mantel wrote a novel about Thomas Cromwell but in fact he’s extraordinarily generous about Mantel’s work in discussing his new biography of the Henrician statesman.

Kate Galloway on how our growing surveillance dystopia makes the case for an Australian bill of rights ever more compelling (I confess to a complete reversal on this issue over the years) while, in a piece I don’t particularly agree with, but which raises some important points, Megan Davis calls for an end to the context-free importation of US free speech rhetoric to Australia, and another piece I’m not necessarily on board with but made me think: how the protection of “hollow speech” in the name of free speech undermines democracy. But on a cheery note, the US may be returning to civil war because its history is one of being the Disunited States. Imagine the Ken Burns doco for that.

Continuing an irregular series in which dogs help demonstrate the basic tenets of Western philosophy.

Not ‘white terror’, but ‘Right terror’

Bernard asked: why are we still reluctant to call terrorism by white men “terrorism”?

Because it’s not scary to the people who produce the news, but only to some people who consume it?