A new report from Screen Australia has shown that Australia produced a record amount of local content this year, despite a drop in expenditure.

Screen Australia has announced that it spent a record amount on Australian titles in 2017-18, but that total expenditure on drama production in Australia was down 37% compared to last year.

Speaking to Crikey before a new report was released on Tuesday, Screen Australia chief operating officer Michael Brealey said the total spend was down because fewer foreign productions started in the 2017-18 year, but the spend on local production was likely to increase next year, too.

“We’ve seen in this report that there’s more expenditure per hour — it seems to be a trend towards shorter run series and spending more on them,” he said. “Those higher production values seem to be in direct response to this highly competitive international market place … Netflix is quite focused on premium content, and we’re seeing more of that kind of investment.”

Brealey said it’s likely that the trend will continue upwards for at least the next year, but there was only so much room in the small Australian market. “I think we’re going to see an increase in drama expenditure in the next year … but there is a limit to what the marketplace in Australia can bear,” he said.

The report also found that spending on children’s programming was higher than last year at $49 million, but below the five-year average, and the number of hours of content produced was down, with less animation produced. Commercial broadcasters in Australia have a quota of children’s content they must produce — something they want reduced, and a focus of the government’s yet-to-be-published local and children’s content review.

“Networks all have quotas, and they’re all hitting their quotas, but it’s extremely challenging for them,” Brealey said. “It’s a very challenging environment for kids’ content … The challenge is finding ways to get content made that makes it to kids.”

The commercial networks want their children’s content quotas reduced or removed, and that responsibility moved to the ABC, something that is likely to have been considered in the review. “It’d be extremely problematic to get the ABC to do anything like that without changing its Act,” Brealey said. 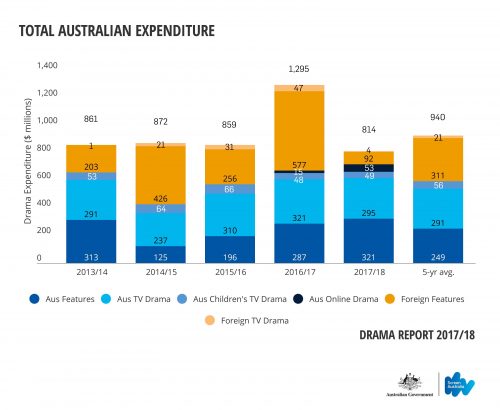 Brealey said that foreign expenditure would be up next year, with some big-budget Hollywood movies already in production, including Dora the Explorer.

The only problem with an outstanding production such as ‘Mystery Road’ is that, in its wake, other programming is revealed to be formulaic, predictable and mundane.

I thought “Mystery Road” was utterly by-the-numbers formulaic and without an original thought or scene.
Even the old massacre was flagged from the start.
It was a waste of talent & resources.

No wonder I enjoyed it so much then. I have seldom been known to have “an original thought”. If I do have one, it’s by accident.