Morrison unwilling to help Matthew Guy pincer Victorian Labor, the fallout from the ARC grants fiasco, and is a court date in the Daily Mail's near future?

Scott Morrison suddenly out of feedback for Victoria’s state politicians, we’re seeing the kickback from Simon Birmingham’s ARC grant vetoes, and is the Daily Mail about to face court? From the Crikey grapevine, the latest tips and rumours…

What a guy. As we hurtle towards the Victorian state election, our Steve Bradbury Prime Minister has finally met someone who needs him (as opposed to the rest of us who jolt awake every day remembering that, weirdly, Scott Morrison is our Prime Minister). State liberal leader Matthew Guy said in Ballarat on Monday “I need him involved and I’ll be having him involved” in the campaign. But, perhaps in a sign of just how toxic the Victorian Liberal brand is, Morrison, when asked about his involvement, played the “I’ll see you when I see you” card.

Saying he was sure their paths would cross, the PM added “I’m not Victorian so I don’t pretend to tell Victorians what the issues are in Victoria”.

Which is news to us. Back in early September, a week or so after he arrived in the PM’s office, Morrison had a lot of thoughts on what the issues are in Victoria. And guess what he said those issues were:

Poor old Matthew just wants a buddy to sit with on the campaign bus.

On your Marque. Journalists in Australia do not like the Daily Mail very much. The UK tabloid has been accused may times of copying articles written by journalists at other outlets, they claim, word for word. The time may have come for the Mail to lawyer up. After an outpouring of online anger at the Mail following a tweet from News Corp’s Eliza Barr, law firm Marque Lawyers weighed in, suggesting the tabloid could be sued for copyright infringement, and said they’d look into the case. 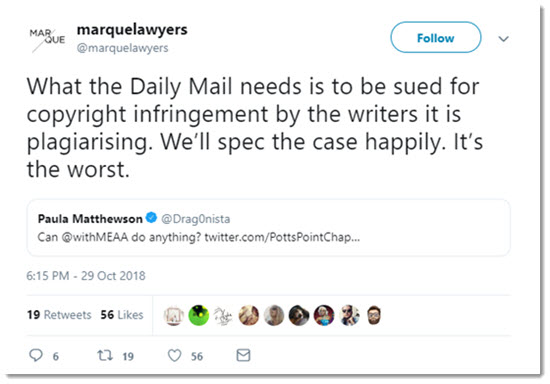 Several journalists weighed in below, offering to join in a class action against the Mail. It should be said Crikey‘s own contributor Michael Bradley is a managing partner at Marque, and that Crikey reckons a few other outlets would go down if such a plagiarism case became the precedent.

In a fiery email sent to staff, Margaret Gardner, chair of Universities Australia and the Vice Chancellor of Monash University lashed out at ‘Birmo’s’ decision, calling it “a fundamental affront to the principles on which universities operate”. Birmingham’s intervention is not totally unprecedented — during the Howard years, Brendan Nelson rejected several such grants. Still, Gardner’s response indicates the blocked grants may sour the relationship between the government and the higher education sector.

“When there are those who by their words and deeds seek to undermine the nature of our collective academic endeavour, we must stand and strongly protest,” Gardner said.

The inspired slogan on the Libs’ bus is very telling, it’s —–
“GET BACK IN CONTROL”
It says what THEY are all about, but is not very attractive to most of the voters.
Quite hilarious when you think about it, and points up how detached from reality Pollies and their advisors are.

Young Simon is a bit of a chameleon. He talks the moderate talk, but walks the right wing walk. Someone should remind him we judge them by their actions, not their words. But I guess he knows he will have years in opposition to reflect on this.

Who or what is Steve Bradbury and why was he/it invoked re Mr Shouty? Google was no help, all I found was an interior designer.
It seems that the next tory leaderette will be either Birmingham or unXtian Porter – some sort of revenge for late colonisation?
With Beetrooter leading the gNats into the saline drainage channel.
Let us pray that one of them succeeds so that the benighted party never again troubles Canberra & thereby the nation.(Or both as they might, together, almost constitute a normal human being.)

Thank you for that link.

How can you be Australian and not know what “doing a Bradbury” means? I thought it was ubiquitous… still hear it on every radio show, TV panel show, stand-up comedy routine and tired political pundity pieces whenever someone unexpected wins anything.

I now see the point of the usage – not having the slightest interest in any form of sport is a major blind spot for which I am grateful.