What republic? How Australian media lost its cool over Harry and Meghan.

Meghan and Harry are on their way home but it wasn't just the tabloids getting in on the royal festivities.

Prince Harry and Meghan’s tour of Australia has ended, and while it reportedly was worth millions for the tourism industry, the couple has also provided apparently endless content for the local media. The frenzy truly kicked off with the couple’s announcement of a royal bun in the oven, and it barely cooled off over the next two weeks.

The Australian, the country’s only national broadsheet, wrapped up the visit on Monday with a front-page piece by political lobbyist and commentator Graham Richardson claiming that Harry and William have “squashed” the republican movement in Australia.

While they may not have had it in their heads as their mission in life, the sons of Princess Diana have squashed the republican movement in this country. The issue had largely slipped from the public’s consciousness even before Harry and Meghan’s trip Down Under, but in the wake of the couple’s wildly successful tour, it has now completely dis­appeared off the radar. 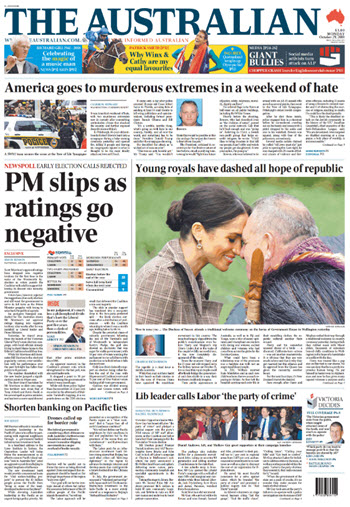 That very paper — as did all the major Australian daily newspapers in 1999 — editorialised strongly in favour of Australians voting to become a republic, saying the vote was a “stark choice”: “Between attachment to an anachronism and confidence in our future. Between an emblem of aristocracy and an emblem of our egalitarian ethos. Between another country’s symbolic leader, with mere residual relevance to Australia, and our own head of state, able to represent us at home and abroad.”

The Sydney Morning Herald said becoming a republic would be a powerful symbol: “Symbols are powerful. The monarchy in all its symbolism takes away from Australia’s self-respect.” The Daily Telegraph echoed those sentiments, saying the symbols associated with the monarchy in the UK  “belong to another nation, inspire another nationality”.

Part of the success of the royal tour is down to the sheer volume of media coverage, across all the media. The Oz has featured the royal couple on its front page five times over the two weeks they were in Australia and the region. For daily papers, this was only topped by the Daily Telegraph and the Courier-Mail, which used their pictures as their front page splash six times each.

And the dedication to coverage wasn’t unique to the News Corp tabloids — The Sydney Morning Herald also used the photogenic couple on its front page five times during the visit, and 20 articles mentioning the couple. That’s nothing, though, compared to the Tele’s interest — 66 articles mentioned the couple over the two weeks after their arrival in Sydney on October 15.

The TV news has also been flush with coverage of the visit, with breakfast shows sending out reporters to cover the visit live, and even the ABC was sucked into live shots of the couple’s engagements on its news channel, coverage in its evening news bulletins and comprehensive coverage online.

Barbados quits the Queen, striding where Australia dares not step

I’m so glad they’ve pissed off.

Looking back at those mainstream media quotes from 1999, which encapsulate the nationalist/republican sentiments that were propounded by that very same media over a whole decade, is it any wonder that we have so many middle-aged/boomer people (who would have been in the 20s-40s then) spouting a whole lot of angry white supremacist nationalist racism and other dangerous rubbish? Looking at the language: “takes away from Australia’s self-respect”, “belong to another nation”, “stark choice”, prompts a question of whether there is a line from 1990s media republicanism to 2010s violent nationalism? Is it today really all about isolated individuals with identity issues, or the expression of an ideology that two decades later has been distilled to be read like a script for myopic, anti-foreigner, hate nationalism? There are more troublesome legacies of the 1990s than a besotted old media.

I doubt it, or there wouldn’t be so many nationalist monarchists, beings that should be cancelling themselves out like an exotic particle. And yet, one of them ate an onion like an apple then knighted Sir Prince Phillip. Was even Prime Minister for some reason.

I barely watched anything about them and thought about guillotines and firing squads every time I was made aware of them.

If our republican movement wasn’t a total joke it might actually get ‘onto the radar’. Monarchists should not assume everyone is really into constitutional monarchy simply because no one cares enough to destroy ARM and take its place. If the royals ever try to do anything more than be celebs people would probably care a lot more. In a way, constitutional monarchy is already dead and we’re just waiting for the gravedigger to get started so we can bury it.

Well said Draco, I envisage the same guillotines and firing squads. Look around the world at all the old colonies. The crimes against humanity, poverty, genocide, slavery, no crime that was too low to go. All for the aggrandisement and personal wealth of those that deem themselves to be rulers of the world, dog given rights, no less. Strewth !! Truly sick making!!
Australia needs to get a grip on reality. Get rid of the bludger celebs, select our own Head of State.

So, two married people, neither of whom possibly have any Windsor blood, have revitalised the English royal family?