Why did Scott Morrison save Craig Kelly from preselection defeat?

Liberal MP Craig Kelly was close to losing his preselection, but it looks like the PM himself has intervened to save the Liberal Party's incredible gaffe machine.

Liberal backbencher, unpaid Sky News intern and Tony Abbott action figure left in the sun too long Craig Kelly has engaged in a preselection battle for the seat of Hughes, which he’s held since 2010.

He was, according reports more or less certain to lose to the more moderate Kent Johns until Prime Minister Scott Morrison, in his infinite wisdom, intervened to save him.

And look, Kelly has made a rich contribution to the public discourse over the past eight years. Let’s look back at some of his greatest hits.

A natural aptitude for race relations

Back in 2014, Craig Kelly — a man who appears to not have access to any functioning search engines — attended an event in Sydney commemorating the date of establishment of the Independent State of Croatia.

For the benefit any other MPs so afflicted: the Independent State of Croatia was established during World War II, allied with fascist Italy and Nazi Germany and run by the notorious Ustashe — who deported and killed Jews, Serbs, Roma and socialists by the hundreds of thousands. Kelly reputedly passed on PM Tony Abbott’s best wishes to them. It caused a mini international incident with Croatia summoning the Australian Ambassador in Zagreb to answer questions about it.

Then there was the road signs debacle. As the debate over so-called “African gangs” in Melbourne became the cause celebre of the hard right, Kelly made a typically pithy suggestion — a sign at the Victoria/New South Wales border telling people they were more likely to get their car stolen in Victoria. It has not yet, as with many of Kelly’s suggestions, been implemented.

I munch on coal all day and if you don’t, it’s treason, or baby murder, or…

Utterly bananas statements in defence of the coal industry is very much the rule, rather than the exception with Kelly. Bear in mind, Abbott put him in charge of  his environment and energy committee.

In July, Kelly said, that “to demonise our nation’s one number export earner – that without we’d be unable to afford our world class hospitals, the National Disability Insurance Scheme, aged care, etc, etc – is an act of treason.” Yep. Kelly described “demonising” coal as “an act of treason”. 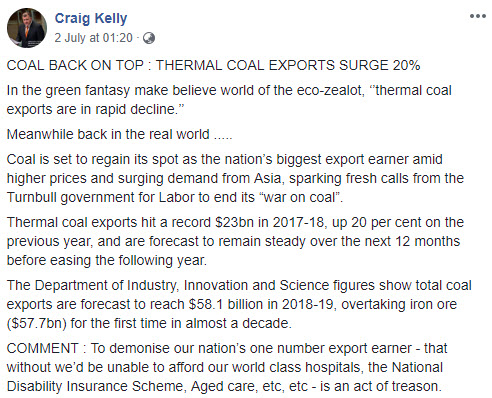 Back in 2016, Kelly stayed on theme telling parliament that “if we raise the cost of electricity in this country, the burden is paid by those [learn-to-swim] centres that pay the electricity bills and it’s higher costs for swimming lessons.” Then, having had time to think about it, he went on Facebook to say … this:

By making swimming lessons more expensive, some parents are going to be unable to afford them — the result (being) less children having basic swimming and water safety skills, placing them at greater risk of drowning.

It’s not just our children being put at risk by solar energy. In 2017, Kelly told the ABC that renewables would push up energy prices to the point that elderly Australians would be scared to turn on their heaters, and freeze to death. “People will die,” he said.

And there’s more. The difficulty when one says weird stuff in public a lot is similar to a great and popular artist contemplating their next work — how does one preserve what made the early work so compelling, while keeping it fresh? Earlier this month, during a speech to party members in Sydney, Kelly showed exactly how this is done, sticking with his coal-fancying ways, but flipping the script. Not only do fossil fuels not cause climate change, they save us from climate change.

The reality is today, we live in a time where our generation has never ever been as safe from the climate at any time in human history. The climate was always dangerous. We didn’t make it dangerous … it’s fossil fuels that protect us from that climate.

Our particular favourite line from that night: “even the climate has changed in space.”

We should all ‘look over’ MH17

Kelly certainly has a way with words. After the father of three victims of the MH17 disaster took to Facebook to condemn US President Donald Trump’s toadying to Russian President Vladimir Putin, Kelly couldn’t stand by and do nothing. He told Sky “nothing is going to bring those three kids back” and, as such, Russia’s involvement in the shooting down of the place ought to be “looked over” for the sake of good international relations.

Kelly then sorted everything out with an absolute for-the-ages non-apology:

… what a disappointment that people have taken my comments and actually taken advantage for political reasons to blow them up and have caused additional pain to those families. If my comments were taken out of context and have been blown up I certainly apologise to everyone

What about the gender pay gap?

Why leave it at crime and energy policy? Surely we all want to hear what Kelly has to say about the ladies, right? No? Oh, well, he’s told us anyway…

In September Kelly went on Facebook and lampooned Labor’s rhetoric around narrowing the pay gap between men and women by posting a Forbes article about supermodel salaries, which pointed out something those bleeding hearts hadn’t thought of: women models get paid loads more than blokes! Typical concerns of the Aussie battler: the supermodel pay gap.

The hits don’t end there. While the Coalition was publicly wrestling with the issue of its relationship with women, Kelly threw in his two cents — saying politicians who breastfeed in parliament, like Greens Senator Larissa Waters, were “a bit over the top” and trying to make a statement.

Anyway, next time you see a Liberal Party woman being messed about in a way that ends their political career — Jane Prentice, or Julia Banks, or even Lucy Gichuhi to name a few — try to picture any woman being as soggy an embarrassment as Kelly has been, and try to imagine them not only keeping their job, but having a PM intervene to save them from the chopping block.

So, what is the answer to the question in the headline?

Charlie probably didn’t write the headline. Personally I think it works quite well as a rhetorical question. You know, like “How did this incapable rabble become a Government?” You know the answer but you ask the question anyway.

Fair point Rais, feeling a bit grumpy today what with one thing and another. The chronicle of Kelly’s nasty nonsense was well put together, to Charlie’s credit.

The question is clearly rhetorical.

Quite Rob et al. I was hoping for an insight or some dirt into this instead of just a rehash of Craig’s dumbest moments.

I see that Kelly’s Parliament of Australia entry lists his previous career as “export manager”. Presumably, he exported his brain.

John Hall
Reply to  The Curmudgeon

Perhaps he can be exported to Israel – our ‘special’ Ambassador to Jerusalem perhaps?

The answer is simple-placating the Far Right so as to avoid getting rolled by them. Not that this worked for Malcontent.

Ummm … “Because, when compared to Kelly, Morrison looks both intelligent and competent.”

Talking about looks I reckon I can see a resemblance between Kelly and Morrison….could there be a secret paternal connection?

I think you might’ve solved the riddle Graeski !
Of course, the only way to make SMthePM look “intelligent and competent” is on a comparative basis, as in; “compared to cat poo…”,”compared to a lump of coal…” and so on.

In answer to the question above. Morrison is skirting much closer to the right of his party than the moderates that voted for him would have wished for. He is and always was one of the nasties and now that he has the top job he no longer has to pretend.
It is just one last gigantic misstep from Turnbull, who would have been far better elevating J Bishop to the top job as a counter move to Dutton.

Thanks for clearing that up Rab; Charley needs to get you to sub edit for him.

Master Of Coin
Reply to  TheRabidHamster

Sadly if it had come down to a two horse race between Bishop and Potato Head, the Bish would have lost badly, such is the dislike for her within LNP parliamentary ranks.

DF
Reply to  Master Of Coin

Are you saying she wouldn’t have had a shoe to stand on?