News Corp's anti-royal commission cheer squad should take a look in the mirror, Julie Bishop and Latika Bourke's tattered friendship, and the ABC has some trouble passing.

Paul Kelly and Andrew Bolt on the wrong side of history; just when did Julie Bishop and Latika Bourke fall out; and things are getting tedious at the ABC, but at least one employee has a sense of humour. From the Crikey grapevine, the latest tips and rumours…

Any take that’s not Bolted down. In times as fractious as these, if we were to try a find a proposition that would attract the widest degree of consensus in Australian politics, it would surely be that the Royal Commission into Institutional Responses to Child Sexual Abuse was a good and necessary move. It will, if not right the wrongs of the past, then at least force Australia into a reckoning.

But there have been dissenting voices along the way. News Corp’s Andrew Bolt, in particular, has dedicated countless columns to defending Cardinal George Pell and calling the royal commission a “witch hunt”.

“Cardinal George Pell is the victim of one of the most vicious witch hunts to disgrace this country. It is shameful. Disgusting. Frightening,” he wrote in 2016. He also thinks the stats the commission is going off have been dodged up (like climate change, we guess) and senses conspiracy in the fact they didn’t find any Muslim paedophiles.

Meanwhile, over at The Australian, editor at large Paul Kelly marked the announcement back in 2012 by employing an inexact use of the word “populist” before it was cool, calling it a “depressing example of populist politics“. He described then-prime minister Julia Gillard’s media conference announcing the commission “a serial exercise in populist politics and policy ignorance”.

So, now that both sides of politics have movingly apologised for the lives ruined by abuse which was covered up and that Gillard has returned briefly to the limelight to accept standing ovations from victims, we wonder if Kelly or Bolt have had a moment to reflect on what they’ve said and whether they might offer an apology of their own.

A long time ago, we used to be friends. Former foreign minister Julie Bishop’s journalistic love affair with London-based Australian politics reporter Latika Bourke exceeded even that of Scott Morrison and Ray Hadley. But, much like that star crossed romance, it burned too bright and consumed itself.

At the start, it was all glowing recaps of their trip to New York together (“the bone-chilling cold is no deterrent for Australia’s Foreign Affairs Minister as she jogs her way through midtown Manhattan. ‘I try and keep fit and healthy and that allows me to focus,’ she says determinedly”) and interesting choices for DFAT scholarships. Hell, Bourke even threw a defense into her piece about the controversy around Bishop claiming expenses for her boyfriend (“Bishop has never claimed taxpayer travel for Mr Panton’s international trips — unlike Labor’s Bob Carr, who billed taxpayers for his wife Helena to accompany him abroad”). Now, Bourke is revealing that Bishop hasn’t declared a $25,000 pair of shoes.

It’s not the first time Bourke has written a less than flattering story in the past few months. But when did this happen? Interestingly, the first sign that things might be awry was in February. A few weeks later, our own Michael Sainsbury observed that Bishop was beginning to lose her prestige and influence. And certainly, Bourke’s coverage of Bishop has not been any more generous since the August revolution toppling Malcolm Turnbull also shunted Bishop from the cabinet.

ABC passes. Ms Tips hears that the rollout of new security passes at Aunty’s headquarters in Ultimo is a bit of a schmozzle. ABC staff have been spending large chunks of their days this week queuing up in the foyer to collect their new, unbranded passes. The security officer handing out the replacements has to find the correct swipe card from the hundreds awaiting collection — sorted by division, but not alphabetically.

When Ms Tips stopped by Ultimo on Tuesday the line was about 40 staffers long, and we hear the wait for some has been up to half an hour. To make matters worse, some helpful employees have collected passes for their colleagues without telling them, so when they finally get to the front of the queue, their pass is nowhere to be found. If only implementing the new security measures were as easy as ABC!

The revolution is just a tshirt away. Speaking of Aunty, one of the more positive aspects of Geoffrey Rush’s career defining performance during his defamation case against the Daily Telegraph was his exquisite drive-by slam of the national broadcaster. He told the court that before he got into acting he feared he would be “doomed to teach or work for the ABC”. Ease up, champ. In response, some entrepreneur (or perhaps just an ABC employee with a sense of humour) has made up a t-shirt to match. 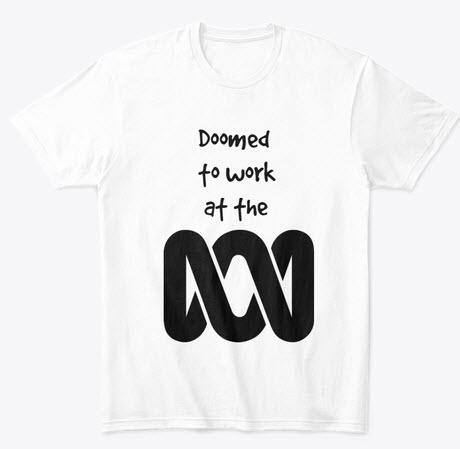 Cricket Australia chair is no union man. It’s been a rather hellish year for Australian cricket. The sandpaper-gate controversy back in March claimed a number of high-profile scalps and derailed the national team, who are currently getting flogged by Pakistan over in the United Arab Emirates. Steve Smith and David Warner were the first of the team’s leadership to depart, facing 12 month bans. Coach Darren Lehmann, chief executive James Sutherland and team performance boss Pat Howard quickly followed them back to the pavilion.

But one man managed to carry his bat through the collapse. Yesterday, Cricket Australia reelected David Peever as its chairman. Peever, who is a former managing director at mining giant Rio Tinto, kept his head down during the ball-tampering scandal, and was rewarded with reelection just days before the release of a review of the national team and the governing body. But Peever is probably not the most popular man amongst the players themselves. During a protracted pay dispute between the players union and Cricket Australia last year, Peever attacked the “reckless tactics” of the union. His stance in the dispute, which at one time put the 2017-18 test summer in jeopardy, was seen as a product of an anti-union agenda fermented by his time as a mining boss.

Those who might be Waiting for Godot will be doing so for less time than those waiting for an apology from Andrew Bolt or Paul Kelly.

Arky
Reply to  Master Of Coin

I mean, Bolt and Kelly both have tons to apologise for. Most journos do but them more than most. Wouldn’t hold my breath waiting for ANY journo to apologise for getting it wrong. None of them do.

Thanks for the link to the Bishop piece. It turns out I made some absolutely prescient comments on it.

“THE most obvious person should be Scott Morrison, but it escaped absolutely nobody’s attention that Morrison was overlooked to be Acting Prime Minister. If the Treasurer has so little pull in the government that he can’t be Acting PM in that scenario…. Still, he can’t be written off completely. Once Turnbull goes, it is still possible Morrison would emerge as a compromise candidate.”

Also I said this about the article’s claim that Julie Bishop had previously been the obvious choice to succeed Turnbull:

“I am confident this was NEVER true in Lib circles where Bishop is seen as a serial backstabber who supports every leader until she doesn’t, and a lightweight who couldn’t hack it in a financial portfolio. And nor is it true in Labor circles who quite reasonably believe that the Parliamentary Liberal Party agreeing to accept the authority of a woman is still a generation away at least. Not to mention all the ammunition collected against the Asbestos Queen, Probably Rorter of Travel Entitlements and Non-Declarer of Gifts, she who accused Labor of wanting a terrorists’ picnic in Syria and various other nasty outbursts.”

I don’t mention this so much as a prescient thing – it wasn’t hard to predict that the Liberal Party wouldn’t replace Turnbull with Bishop. I mention this just because I quite like the summing of Bishop’s bad points and wanted to give it another airing.

The Blotster say sorry? For being wrong? Why would/should he? It’s not a fault in his scribblings, it’s a feature.
One might say his only guiding principle, tendentious mendacity.
He, like the Drumpfster, takes the advice of the malignant Mobster mouthpiece, Ry Cohn, “Never explain, never apologise!”.
As for the Polonius of the Press gallery, when has he ever been correct (had to avoid the word ‘right’) about any of his prognostications?
Remember his “Questions Remain” re PM Gillard and when she faced him down and asked, “What questions? Ask away.” he slunk away, claiming in print the next week to have been ambushed with a gotcha!
Always lurking & listening, never learning from experience, always writing in the same, world weary style, “if only they’d taken my advice”.
If only there had been a simultaneous juxtaposition of curtain/rapier.

Hmm, shock jocks don’t apologise, that’s the whole point. We, on the other hand, couldn’t give a shit about the diarrhoea that constantly gurgles from their mouths and rolls down their chin.