Welcome to Side View — a curated guide to new and overlooked content on politics, policy, and public affairs. This week: socialising in Finland, the mighty erections of tyrants, and when white people get scared.

(I’m sceptical of this story, not because of the detail around Gary Hart and Donna Rice, but because I doubt he would have beaten George HW Bush in 1988. And doubt has been cast before on the authenticity of Lee Atwater’s cancer-led repentance).

Stereotypes save time redux: Finns don’t like small talk. I think I’ll move to Helsinki while the now accelerating closure of department stores in US (understandable if you’ve been in one in the last five years) leaves behind memories of a different era. The legacy of #metoo in the restaurant trade is women cleaning up the mess made by men. And there’s a police force that investigates murders in US national parks. Why has there not been a CSI: Yosemite yet?

I’ve (vaguely) followed debates about irrigation infrastructure for nearly a decade. One constant has been that the Productivity Commission has long hated the handing of taxpayer money to irrigators and farmers for improving the efficiency of irrigation, arguing that if it’s not commercially viable for them to pay for it themselves, it’s not worth doing. The PC’s most recent report on the Murray-Darling Basin in August found that infrastructure modernisation was a ridiculously expensive way to save water that prevented necessary structural adjustment. Well, now some further vindication for the PC: a new study shows that even when irrigation efficiency measures work, they have very limited benefits. Then again, we’ve got it better than most: a new European Commission report identifies five likely areas for water-related conflict.

SHOULD WE ALLOW POLITICIANS TO GOVERN?

Former UK central banker Paul Tucker on the issue of elected representatives delegating power to independent institutions. As a born-again advocate of independent institutions to address issues politicians can’t be trusted to handle (like monetary policy, or — my recent suggestion in Crikey — climate change) I’m wary of Tucker’s hostility to them. I also think he’s missed one of the crucial points about “republican” political thought (derived from Rome, Machiavelli and the Italian city-states of the Renaissance), which is that Machiavelli’s concept of republican virtue hinges on the belief that only citizens who had complete economic independence could be trusted to lead the city-state — thus ruling out all but the very wealthy from any political role. This isn’t a mere historian’s quibble; the whole point of independent institutions is that democratically elected politicians are both too self-interested, and too prone to being controlled by powerful interests, to lead on important issues.

Why do tyrants and autocrats love gigantic constructions? Making up for something? Ask Trump. But one David Frye thinks walls are great and a crucial component of civilisation.  Meantime, life, and healthcare, on the current US-Mexico wall is precarious and what about Australia’s newest wall fad — sea walls? We think they’re great for us but a waste of money for everyone else.

Forget “black holes”, they’re actually donut-shaped “dark energy stars”. Mmmm, donuts. Sounds crazy, except no more crazy than the rest of modern astrophysics. Meanwhile, in not-so-breaking news, dark matter is proving as hard to find as ever — WIMPs may not be strong enough to do the job. (MACHOs got ruled out a while back.)

IT’S OK TO BE SHITE

“White fear is different. White fear is permanent. White fear is entitled. White fear punishes.” Ruby Hamad is rightly brutal on the recent outrage in the Senate and the wider problem of when white people convince ourselves their privilege is under threat. In similar news, American satirist Niecy Nash lampoons white fear in a satirical infomercial for a hotline for racists. Meantime, Laura Wynn confirms my passionate loathing of Airbnb.

BACK TO THE GREEKS

And the In Our Time podcast gets some extra time, with a new book of bonus material from Melvyn and his guests. I’ll have coffee please. And if you’re unfamiliar with the delights of this long-running program, you can learn about them by listening while playing my In Our Time drinking game. 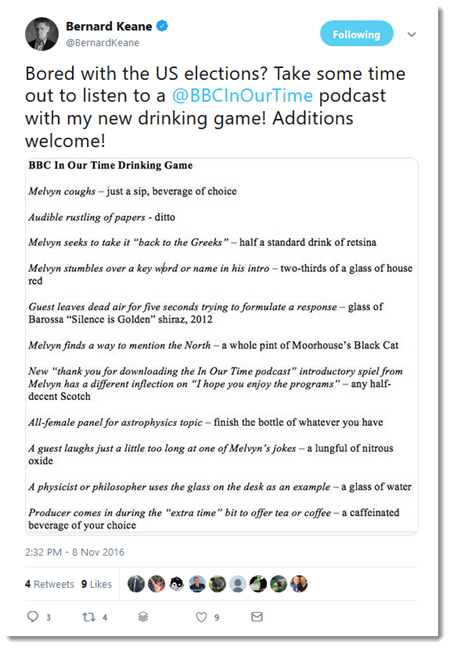