Crikey asks Channel Seven why they asked people on Facebook if they thought "anti-white racism" was on the rise.

Seven is cementing itself as Australia’s most racist television network, this time by providing talking points for One Nation’s Pauline Hanson with a Facebook poll. Shortly after the Australian Senate only narrowly voted down Hanson’s motion denouncing “anti-white racism”, Seven News Sydney’s Facebook account posted a poll calling for opinions on whether such a thing was “on the rise”. 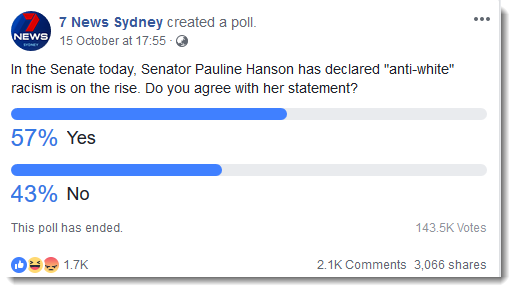 A week after the government scrambled to correct its “mistake” in voting for the motion, Hanson tweeted a screenshot and link to the poll on Tuesday, saying it suggested that “many Australians believe that anti-white racism is on the rise”: 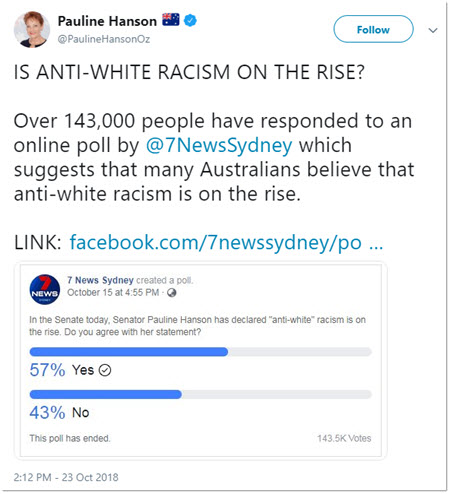 The motion also acknowledged “that it’s OK to be white” — a phrase with a history in the white supremacist movement.

Seven declined to respond to Crikey’s questions about the poll, and whether its producers had accessed any research about actual evidence of “anti-white racism”, and whether the network has been intending to appeal to racist sentiments in its content.

Last month, the Australian Communications and Media Authority (ACMA), which regulates TV broadcasters, found that Seven’s breakfast program Sunrise had incited contempt on the basis of race in a segment where it discussed the neglect of Indigenous children and the Stolen Generations. Seven has rejected ACMA’s finding, saying it was a “form of censorship”.

In that segment, commentator Prue MacSween suggested that some children taking from their families as part of the Stolen Generations were taken for their own wellbeing. The segment was based on a headline from The Courier-Mail, which Sunrise did not fact check before quoting from. ACMA also found the segment breached its accuracy guidelines.

Sunrise, of course, also provided Hanson with a platform in the public eye in the lead-up to her return to political life in her campaign and election as a senator in 2016. She was paid for regular appearances as a weekly commentator.

In July, Seven’s Sunday Night program came under fire (including from Crikey) for a story about “African gangs” in Melbourne. In that story, reporter Alex Cullen said police denied there were gangs because “we live in such politically correct times”, despite Victoria Police having acknowledged a higher-than-average crime rate within the South Sudanese community.

The network’s Melbourne newsroom in January boasted of its “exclusive” access to a United Patriots Front meeting, attended by Blair Cottrell, the violent convicted criminal and neo-Nazi who’s since been banned entirely from Sky News. In that report, as part of coverage on the “African gang crisis”, Seven failed to mention Cottrell’s convictions — including under Victoria’s racial vilification laws — or pro-Nazi views.

They wouldn’t know racism if it jumped on them and clubbed them for not carrying their pass.

“To the privileged, equality looks like oppression” – don’t know who said it (not me) but bloody apposite.

One Nation voters come from the most disadvantaged areas of our community. I wouldn’t call them privileged and you explaining it away like the privileged kicking down is what they perceive to be the gag, as it’s not their reality.

You can think for Aboriginal people all you want.

The day white people genuinely have to suffer from the massive injustices inflicted on those of other ethnic groups-both past & present-then maybe they can cry “anti-white racism”, but the truth is they already won life’s lottery by being born white. The fact they chose to squander that privilege can’t be blamed on non-white people. The hilarious thing is that they’ll happily vote for the very political parties who want to entrench disadvantage via cuts to health, welfare & education. Still, I guess its easier to scapegoat the powerless rather than try to genuinely change your situation for the better.

It’s the Ch7 hierarchy of media barons, CEOs, managers, producers, ‘personalities’ and reporters etc. who are well described as the ‘privileged’ in the quote.

A Ch7 phone poll doesn’t qualify as 57% of the population, but the respondents are not all downtrodden Hansonites in the disadvantaged suburbs.

In any case, many of the disadvantaged, especially if they’re white, often find someone else to look down on or blame – disadvantage is no antidote to scapegoating of the racist kind – and that’s exactly what Hansonism, and Ch7, play on. It’s an ancient game. You’ve missed the bloody point.

@Chilly Winds. I think you’ve missed the point i’ve been trying to make. I’m just trying to understand where the support comes from and if you refer above PHON voters are from lower socioeconomic areas of our society. I think they feel misrepresented as privileged and feel attacked by people who are trying to level criticism at “h7 hierarchy of media barons, CEOs, managers, producers, ‘personalities’ and reporters etc.”

More than you do I’ll warrant. There is no doubt that they are the most disadvantaged group in the country. Many live in conditions that are third world. So don’t bullshit about such a grave situation.

@Patrick Brosnan. No one said they weren’t. And you don’t know me and I don’t know you so why would you comment on who is more ignorant on an issue we’re not even talking about?

Zeno, there is privilege within privilege. However, I get your point that within white society, Hansonites aren’t that privileged. But punching down against less privileged non whites, instead of up at their privileged white masters is just a lazy way of blaming others for their situation.

Oh what a complete load of utter bollocks, Zeno. They’re ill-educated imbeciles who have enjoyed the privilege of being white, male heterosexuals for decades-& are now just looking for easy scapegoats for why their lives aren’t significantly better than they believe they should be. These scapegoats include Migrants, Refugees, People of Colour, welfare recipients, single mothers & women in general. All groups who tend to be far more disadvantaged-on multiple fronts-than those who support One Nation.

Maybe closer to the truth.. But to lump them in with our upper society does no one any favours. It spreads misinformation and won’t help to solve any issues – and I’m saying that i think it actually causes issues.

I moved
Reply to  Marcus Hicks

That’s racism right there buddy, in your comment….can you see it?

Marcus Hicks
Reply to  I moved

To quote Inigo Montoya: “You keep using that word. I don’t believe it means what you *think* it means”.

Howard
Reply to  I moved

I’ll educated imbeciles are not a race. They can come from any race. I guess you’ve just (probably inadvertently) provided evidence for Marcus argument.

Go to Doomadgee, then talk to me about how disadvantaged this 57% of Channel 7’s sample are.

Everyone is opressed to a certain extent and everyone oppresses others. All you can do is try to be a good person and don’t make things worse. Life is about suffering. What can you do about it? Try to make things better, it gives meaning to your life. No one person can fix the whole world, so try to fix what you can and start with yourself. Don’t be ungrateful. So many people, especially neoliberals, just want to bring everyone down. Try being positive and see your life change for the better.

This kind of article is designed to polarise. It is not a formula to bring people together. All it does is unite hatred against the other. Here, the other are people who believe it IS OK to be white. What is wrong with being white?

That kind of poll is designed to polarize. That poll is not a formula to bring people together.
PHON would see that poll as a positive. What is wrong with being non-white ?

Are we supposed to just accept this opt in poll which allows for multiple voting hacks as being in any way valid?

Indeed, they failed to mention that 80% of the yes vote came just from the current members of the PHONY party.

More than that, it’s incredibly biased. Most people who aren’t intimidated by equality would not have responded at all.

Personally I found that poll extremely convincing – it convinced me that there is quite a large cohort of extreme stupid out there, and they like to watch extreme stupid TV.

Can’t disagree with that – as is well demonstrated daily when Crikey has the TV viewing figures in general.
It’d make a marble statue cry.

Says more about the 7 audience than anything else.

What these privileged white snowflakes need is some solid exposure to Apartheid, the fear of random lynching, the threat of their children being taken from them without warning, the threat of being kidnapped & forced into indentured servitude and Jim Crow style laws……only then will they have even the remotest clue as to what RACISM truly feels like.

The media is cryiing out for tougher regulation. Stokes is letting his network air dangerous views.

I thought Stokes was Channel 9? Whereas Rupert Murdoch, the prince of sleeze, is channel 7. (and 80% of our media.)

Stokes owns a controlling stake in 7 West Media.
Costello is chair of 9 and now Murdoch’s sKKKy News is broadcast on some of 9’s subsidiary digital channels.
Bruce Gordon owns a stake in 9 and all of WIN, which I believe (may be mistaken) also broadcasts sKKKy News. Gordon tried to buy 10 on the cheap with the odious Murdoch Junior.

Stokes is SevenWest Media (which includes 7).

Nine, which was once Packer, is now just private equity although Bruce Gordon owns a pretty big stake.

If the status quo is what Hansonites call anti-white racism, it’s no wonder ACTUAL racism is on the rise among that ignoramus sector of genuine racists!