Tas press gallery up in arms over restrictive new guidelines

One of the greatest concerns for the media is the rules around photography in the chamber.

New parliamentary media guidelines for Tasmanian journalists will restrict media from “lingering”, talking to MPs in Parliament House without invitation, and photographing “unparliamentary behaviour” in the chamber.

The Speaker Sue Hickey and the Sergeant-at-Arms have said they’re simply formalising ad-hoc rules that have been emailed out in the past, but journalists and their union, the MEAA, are concerned that the rules will restrict the public’s access to information about elected officials. The rules will limit interactions between journalists and MPs in parliament house, and prevent filming anywhere in the building without permission.

MEAA Tasmania president Mark Thomas told Crikey that the rules had come out of the blue and without consultation with the media. “It is a time-honoured tradition across Australian parliaments for members of all political persuasions to approach media and vice-versa with questions or suggestions about stories,” he said. “Any further restrictions around the Parliamentary precinct or process restrict the rights of the Tasmanian public to information about what their duly-elected representatives are doing in the people’s house, the Tasmanian Parliament, on a daily basis when it sits.”

The editor of Hobart’s daily newspaper The Mercury, Chris Jones, said that none of the rules in the new guidelines had previously been enforced. “My concern is that by collating them into a formal rule book they are more likely to be,” he said. “And they are ridiculous.”

One of the greatest concerns for the media is the rules around photography in the chamber. The rule would prevent photos taken of members when they are not speaking — similar to the archaic Senate rule that was overturned in 2016, pushed by then-new Senator Derryn Hinch.

In talking about their concern over the new guidelines, both Jones and Thomas cited poignant photographs taken and published by The Mercury during the dramatic election of Hickey — a member of the Government — to the speaker’s chair. She was nominated by the opposition and defeated the government’s nomination.

“There were extremely poignant pictures taken that day of the drama as Ms Hickey accepted the nomination and the Premier tried to dissuade her,” Thomas said. “Didn’t the people of Tasmania deserve to see that properly and fulsomely reported?”

The rules will also restrict photos from being taking after the first 10 minutes of question time, and require reporters to make an appointment by phone in order to talk to MPs.

Writing in The Mercury yesterday, Jones said the rules threatened democracy and undermined the public’s right to know: “These rules are nothing more than a sneaky way for our elected officials to avoid scrutiny as they go about the job taxpayers pay them to do in the building at the centre of our democratic system.”

Politicians trying to control the press gallery is not unique to the Tasmanian Parliament, of course. Earlier this year the Victorian Parliament built a new office block for its elected members, off limits to journalists and staff in the name of “privacy”. Filming and photographs are banned, and reporters are also not allowed to “loiter” in corridors.

And The Advertiser in Adelaide is currently campaigning about government secrecy, with stories running all week about secrecy across all arms of government, including the parliament. 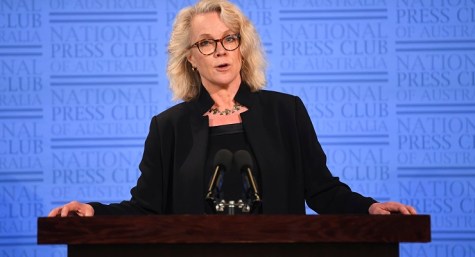 @Mark Thomas
Fulsome: complimentary or flattering to an excessive degree.
“the press are embarrassingly fulsome in their appreciation”.
And did he really mean “extremely>> poignant<< pictures" ?

If only people would use the full meaning of “fulsome” – not just excessive but “nauseating, as of a surfeit of lampreys”.
I’m still trying to guess which word was intended instead of ‘poignant’ for those pics but they seemed fairly prosaic to me.

When you think about it, there’s no other business, NGP, non-profit or other major organisation where reporters can just wander in and take snaps and hassle people in the hall. Overseas reporters may hang out outside #10 Downing St or outside the White House gates but they aren’t tootling around the West Wing unescorted.

There’s a second school of thought here, which is that the media is too cozy with politicians and this separation is a good thing, and that politicians SHOULD be able to do their thing in parliament without having to constantly stage for the cameras lest they look dumb or whatever.