If the Liberal Party has learned nothing else in recent months — and you can pretty much write your own punchline at this point — they are at least showing a newly acquired appreciation of the importance of tamping down expectations ahead of a tough byelection.

It was a very different story before Super Saturday in late July, when expectations reigned of a looming humiliation for Bill Shorten, and every tweak of Anthony Albanese’s eyebrow was interpreted as positioning for its aftermath.

For a government in an improving but still dangerous position in the polls, the opportunity to stir the pot proved impossible to resist.

Far from walking back suggestions they stood poised to achieve the historic feat of poaching one or more seats from the opposition, the Liberals circulated polling in the last week of the campaign showing they had their nose in front in the northern Tasmanian seat of Braddon, while a cocky Peter Dutton put it to a radio interviewer that a Liberal-National Party win in Longman, neighbour to his own outer Brisbane electorate of Dickson, was essentially a done deal.

So when it became apparent on election night that things weren’t panning out that way, an honourably narrow defeat for the Liberals in Braddon was ignored, and a surprisingly poor showing in Longman was all anyone could talk about, within the party or without.

Thus began the series of events that would bring down Malcolm Turnbull six weeks later, which in turn set the stage for tomorrow’s sequel in Wentworth.

This time the Liberals are setting the bar for themselves as low as it can go, in part by providing “leaked” internal polling to The Australian on Wednesday that credits independent Kerryn Phelps with a 55-45 lead.

Not everyone was convinced – one prominent sceptic being Crikey politics editor Bernard Keane, who accused the Liberals of seeking to “scare voters back into the fold with spurious ‘internal polling’ stories handed to friendly outlets”.

It can hardly be doubted that such was the intention, but whether the means to pursue it were truly “spurious” remains to be established.

With due allowance for the poor performance of seat polling in recent times, a series of ReachTEL polls during the campaign gives cause to suspect otherwise.

Since the pollster’s biases should be consistent from one poll to the next, the movements between its four published results are likely to be meaningful, even if the overall results are askew – and they tell an entirely convincing story. 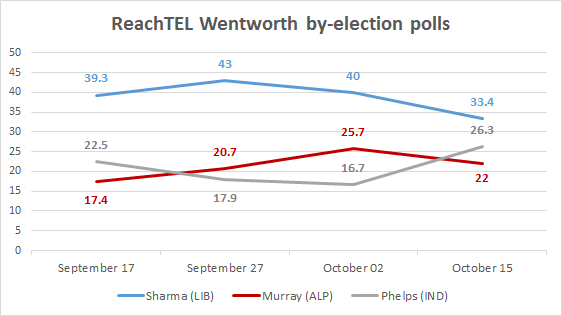 After looking competitive early on, Phelps muffed the start of her campaign with an ill-advised decision to direct preferences to Labor, followed by a voter backlash and an unedifying reversal of her position that gave voters on both sides cause to doubt her judgement.

The resulting slump in her support appeared to leave Sharma in the sweet spot, with Labor candidate Tim Murray looking more likely to finish second – and with Murray sure to receive a much weaker flow of preferences than Phelps, even the soft primary vote attributed to him by ReachTEL would have been enough to get him over the line.

However, all that went out the window over the past fortnight, as the government has staggered through a series of self-inflicted disasters that could hardly have been better tailored to offend Wentworth’s socially liberal sensibilities.

In the meantime, Phelps’ early missteps faded from memory, and the Labor campaign took the foot off the accelerator out of recognition that Phelps stands a better chance both of winning the seat and keeping it out of Liberal hands at elections to come.

The ensuing swing back to Phelps recorded by ReachTEL is in line with successive reports of Liberal polling, from Wednesday and a week earlier, suggesting a hitherto tight race had blown out in Phelps’ favour.

Throw in the unmistakable desperation behind the thought bubble about moving the Australian embassy in Israel to Jerusalem, serving no other purpose than to court favour with a Jewish community that accounts for 12.5% of Wentworth’s population, and it seems eminently plausible that the Liberals are genuine in their fears that they will wake up on Sunday morning in minority government.

What do changing demographics mean for the News Corp papers?

The four kinds of right-wing takes on Wentworth

Is Kerryn Phelps eligible for Parliament?

I’ve heard bugger all from the meeja regarding Murray.

I have always had a suspicion about Longman. I seem to remember reports that the local LNP was not doing the most they could to win, and that was not helped by their choice of candidate. And as pointed out in the article, the Liberals were running hot about their chances, based they said on what they were hearing on the ground. It funny how straight after the Super Saturday poll, there were reports that the LNP in Queensland were pushing for a change of leader. In particular they supported someone whose electorate was next door to Longman. Of course these are just the suspicions of an old lefty, and in no way should be taken as suggesting that the local LNP ran dead in Longman, told Turnbull porkies to get him to over commit, all to get Dutton into the Prime Ministership.

Surely the Kiss of Death for Sharma was when the Caterwauling Catamite had him (so to speak) on his show and called him “the most impressive Liberal candidate in the country”?