On the drug money

Welcome to Side View — a curated guide to new and overlooked content on politics, policy, and public affairs. This week: crime, police and policy on the streets of the Big Apple, why funerals are a rip-off and Japan runs out of people.

The global illicit drug trade is worth, according to a conservative estimate, $500-650 billion a year or just under 1% of global GDP. This is a problem, because it means that every 12 months, the drug industry must find a way to launder around 60% of the equivalent of a vast warehouse of US$100 bills, in competition with other illegal activities like human trafficking. That’s why money laundering is such big business for banks, financial centres like the City of London real estate developers like Donald Trump and border areas as demand for clean money booms.

Then along came cryptocurrencies, which were ideal for money-laundering. Now cryptocurrency advocates (Blockchain! Gamechanger! Sorry… force of habit) are firing back, saying the likes of Bitcoin are nothing compared to what the big banks do. Either way, it’s almost certain that trillions of dollars of drug money – and revenue from other criminal activities – surrounds us every day in our economy, infrastructure and financial system.

One of the best policy-related podcasts I’ve ever heard: Reply All has an amazing two-parter on “The Crime Machine” — the origin of a major problem in New York policing and a lesson of unintended consequences and how participants will game any system. Dramatic in its own right but a must-listen for anyone interested in policy implementation in the real world.

The latest tech bubble: rockets. A fascinating discussion about the intersection of corruption, game theory, transparency and cancer — a particularly relevant piece for a country like Australia, which is falling on Transparency International’s index because of the influence of political donors and powerful mates. And you probably knew Japan’s population is declining. But maybe not that it’s going to decline 16% in the next three decades. But it’s providing us with all sorts of evidence about how population decline affects different regions — especially rural versus urban areas. And why, in the US sports media economy, when LeBron James moves teams, he causes tremors through the entire industry.

The battle over the legacy of Spanish mass murderer and war criminal Francisco Franco continues to this day, with some Spaniards still supporting the fascist tyrant responsible for perhaps 100,000 murders of non-combatants. Meanwhile, Chinese ruler Xi Jinping’s narrative of Make China Great Again faces some home-grown challenges while the Putin regime is furious about a new division within the Orthodox world. A new book on the history of the world through textiles sheds some welcome light on critical technology too readily dismissed as “women’s work”.

Australian funerals have been corporatised and turned into yet another industry gouging customers — and exploiting the idea that funeral spending equals dignity. A great piece by Michele Freeman. And kudos to the editors of The Lifted Brow site who are handing over an entire issue to First Nations people. Their rationale is here and I find it compelling. At Kill Your Darlings, Fernanda Dahlstrom has a great long read on Indigenous girls and women in prison.

The argument over company tax cuts is finished for the moment in Australia but it will come shambling out of the grave at some point, more rotten and noisome than ever. So let me present the case of the United Kingdom. Here’s the most recent data, from a month ago, about real wages in the UK. Yes, you’re reading that right, UK workers are currently earning less than they were for much of the 2000s. 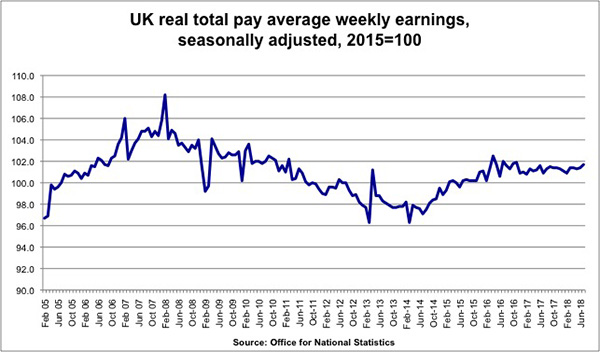 But wait, didn’t the UK dramatically cut its company tax rate? Absolutely — starting under Gordon Brown, then continuing under David Cameron and now under Theresa May. Let’s overlay that on the graph and see whether, as company tax cut advocates claim, they lead to higher wages. 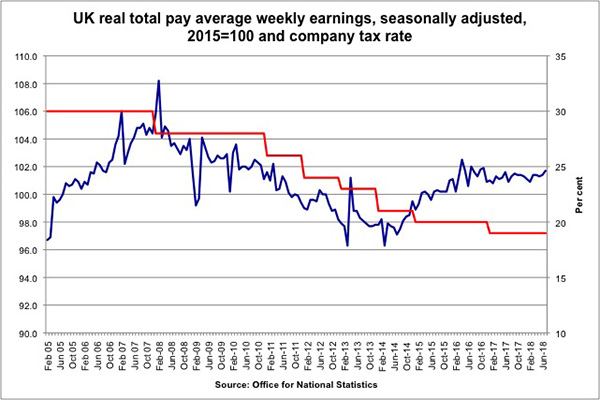 THEY HAVE ALREADY LANDED

I find this UFO story endlessly fascinating: I’ve linked to articles on the 2004 US Navy incident a couple of times before. Now the US Senate Armed Services Committee is going to investigate it. There’s gotta be a fourth season of Twin Peaks in this…