The crowd at the race was up almost 20% and betting turnover was up 9%. At least some of this success was due to the free publicity from the Opera House debacle.

Sydney’s commercial media outlets are among the biggest winners from Saturday’s Everest race meeting. In the weeks leading up to the race, three advertisers spent almost $900,000 on print, radio and television ads.

Marketing and media firm Ebiquity put the spend by betting agency TAB, the Australian Turf Club, and the Australian Jockey Club at $867,000, mostly in Sydney media, with much smaller spends in Brisbane and Melbourne, and smaller again in Adelaide and Perth.

The Sydney Morning Herald had almost daily ads, including four front and back page ads, in the two weeks leading up to the race. The Herald and The Daily Telegraph both carried wrap-arounds and lift-outs dedicated to detailed coverage of the race. 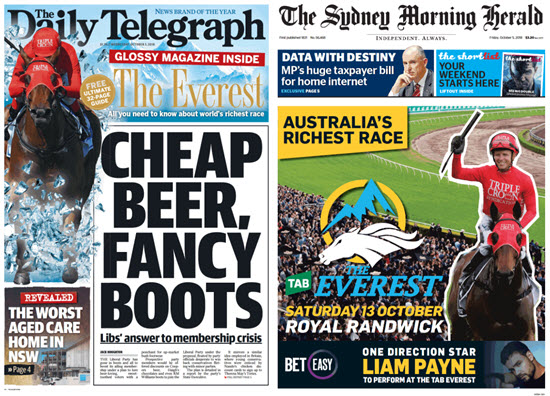 And that doesn’t account for the reams of news stories dedicated to the race over Racing NSW advertising the barrier draw on the sails of the Sydney Opera House. The race, in its second year, became almost a household name after 2GB broadcaster Alan Jones attacked Opera House boss Louise Herron on air over her decision not to allow the light show on the sails, and the New South Wales government then overruled that decision.

That news story was on the front page of The Sydney Morning Herald in some form for five days running, and on The Daily Telegraph’s front page four days in the same period.

Media analyst Steve Allen said the furore had been far more valuable to Racing NSW than any money it spent on traditional advertising.

“It would have been so exceeded by the controversy,” Allen said. “They got millions upon millions of dollars of value from that controversy, and that’s only in Australia.”

He said that Events NSW would also be pleased with the overseas publicity for the event. “Events NSW is trying to make it a global event, and the offshore publicity is probably in the longer term even more valuable to them,” Allen said.

As we reported last week, the controversy was good publicity for the race, if not for Jones and the NSW government.

The crowd at the race was up almost 20% — to 40,578 — from last year despite miserable weather in Sydney on Saturday, and betting turnover was up 9%, according to TAB and corporate bookmakers who spoke to The Sydney Morning Herald.

I remember the hype around the Perth Cup years ago ….. I forgot to, did anyone check the TAB holdings for the Everest – what they got for all that advertising?

What a load of crap! What is the point of this story?
Who outside of suburban Sydney really gives a rats arse about a cashed up wankers horse race?
In Melbourne – you know where we have a race that “stops a nation” – the Everest (what does that mean?) was only of any interest to your welded on $10 RSL punter.
The only time that any one down here in Melbourne ( you know the joint that will soon overtake Sydney as the chosen place to live ) even knew there was a race, was when we read or saw on the TV that one of Sydney’s many old radio codgers had berated the head of the Sydney opera house for not allowing some type of crass advertising
Unfortunately this whole saga is so unbelievably typical of most of the junk that emanates from Sydney – and unfortunately Crikey is a major offender – for a start do you think we would put up with a full bore fuckwit like Alan Jones?
The Melbourne broadcasting landscape is littered with the carcasses of red knecked blowhards who tried to peddle the same rubbish that is so gleefully sucked up by the desperate old listeners in Sydney.

It’s true, Melbourne and Sydney really do seem to have different cultures.

Agree. The article does say a lot about Sydney for all the wrong reasons. But, all the same, Sydney still remains a seductive and beautiful city – its hard to argue with the climate, the coast line and its harbor.