Some political parties are simply unfit to govern. The federal Liberals' refusal to address climate change disqualifies them from the being serious policymakers.

Watching the unfortunate Dave Sharma’s attempt to evade the question of whether he accepts the existence of climate change, and his peculiar claim that the government is “doing enough” and “has a good record” on climate action, is to understand the grim reality for people who believe in the laws of physics within the Liberal Party. They must now utter the most absurd lies and allow themselves to look like fools in order to comply with the dominant climate denialism of the federal Liberals. 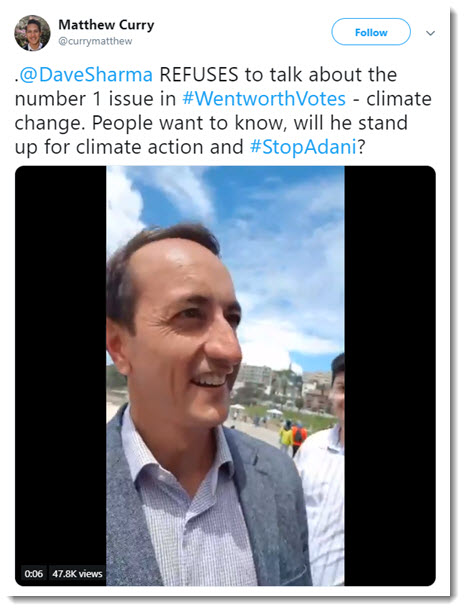 That denialism is twofold — there is out-and-out denialism that simply rejects basic science, as per Tony Abbott, and there is denialism about the need for effective action to reduce emissions. The second can take many forms — the effort to fiddle with data showing rising level of emissions so that they fall “per capita” or “to GDP” — as if the atmosphere will give us a pass for rising population. Or trying to hide the data on rising emissions. Or Scott Morrison’s blatant lie about meeting our Paris targets “in a canter”. Or Angus “The Invisible Man” Taylor’s insistence the only energy issue is cost. Or alleged environment minister Melissa Price refusing to read the IPCC report (which the government tried to sabotage) before attacking it. You can add Sharma’s attempt to run away from questioning to the list.

These all amount to the same thing: a refusal to take climate change seriously as a policy issue. The Liberals have gone a very long way since John Howard went to the 2007 election promising “the world’s most comprehensive” emissions trading scheme. And in the wrong direction.

As the IPCC report makes clear, there will be significant economic impacts on Australia even if warming is limited to 1.5 degrees. At 2 degrees, impacts will be markedly worse, and worse for Australia in particular given “countries in the tropics and Southern Hemisphere subtropics are projected to experience the largest impacts on economic growth due to climate change should global warming increase from 1.5°C to 2 °C”.

A refusal to contribute materially to global efforts to curb CO2 emissions — “material” being way higher than the government’s piss-weak 26% reduction target — is an act of colossal intergenerational theft perpetrated by current generations on future generations. Worse, it’s a theft that makes no sense: the gain for us is modest compared to the loss of economic growth, opportunity, income and quality of life — perhaps even longevity — of our children, grandchildren and descendants. The costs of significantly curbing emissions in Australia is relatively small, as the Gillard government’s low-cost, effective carbon pricing scheme showed.

To refuse to even engage with this issue, then, is a threshold failure for anyone who purports to be a serious policymaker. We can leave rank denialism and stupidity to the minor parties and independents of the far-right who can cavort and gibber on the sidelines. But the federal Liberals’ refusal to take climate action seriously disqualifies them from having any right to govern.

This is in marked contrast to some state Liberals branches, such as the South Australian Liberals, who are committed to a transition to renewable energy and who have rejected coal-fired power altogether. But some political parties are simply not fit to govern: the NSW Labor Party, for example, is so badly damaged by a long history of corruption that it would be extraordinarily risky to allow it near power for decades to come. The federal Liberals have now reached a similar stage. Climate denialism isn’t a Liberal problem, it’s a specifically federal Liberal problem, and they shouldn’t be permitted to govern until they accept the laws of physics.

Are there Crikey readers with a legal background who could advise on how long before a class action could be brought against the Coalition for criminal negligence?

You can see the author is a zealot who wants to crucify anyone who doesn’t ride a bicycle to work to save the planet from climate change – wow! anyone who doesn’t support some sort of financial skulduggery in the form of some stock exchange of gases doesn’t understand the laws of physics – now that is an argument with gravity . The pacific Islanders blame Australia for seas swamping their tiny atolls – that is why they are turning to pristine, pure green, non-polluting country like China so the islands’ forests can be stripped bare and their fish stocks be completely swallowed up – then they Pacific doesn’t have to worry about theoretical decimation in the future by climate change – the islanders are already assuring their future, no worries.
The more people in the world the more emissions are the result – shutting down our log fires in winter won’t change the course of climate change – This theoretical ranting about deniers is the same as religious positions in the middle ages and the same as the modern religious Israel being only a jewish State and Saudi Arabia only a Muslim State etc. –

Let’s not “do a Bernie” and paint with an 8″ brush Desmond. You make many valid points (as always) and it is frustrating to mark yr10 assignments on climate change – to say noting of the (irritating) hyperbole.

As to China – well I think we can see it as the new (21st century) colonialism. For the Island leaders a meeting with the US prez was a photo opportunity only and then an ushering to the airport. The Chinese will listen to them or, at least, go through the motions – which, for the Islanders, is a “first”.

Similarly for “states” but do expect more Chinese naval bases in the region any time soon. Then we can have a discussion on trade and world-order.

That was a particularly sordid rant, a box set of non- sequiturs.

Living in a world where cynics abound…..and think they have the insights that have passed over the heads of us deluded plebs.

BK the NSW Liberals must be as bent as a corkscrew. The only reason for many of the recent decisions must be corruption, they surely can’t be that stupid can they?

A whole article on climate denialism and you then right at the end you make the claim the NSW Labor Party shouldn’t be allowed to govern because of something that has NOTHING to do with climate change.

We get it, you don’t like how bent the former government was, none of us do, but what does this have to do with the 571 words in the rest of the article.

I mean, decades to come is a bit strong, especially since the NSW Libs have their own share of corrupt fussbudgets, but hey, I’ll take it now that it comes with a condemnation of the Federal Libs for their decade of destruction on climate policy. Years late and only after Saviour Malcolm departs the scene but I’ll take it.

Three cheers for Matthew Curry’s confronting Dave Sharma on his views on our government’s response to climate change. Sharma’s evasiveness speaks volumes. Of all the Liberal-held electorates Wentworth must be the riskiest if like Sharma you have no policy at all. Eleven years ago Turnbull could say “Climate change is an enormous challenge and probably the biggest one our country faces, the world faces, at the moment.”
He didn’t dare maintain that stance because his party wouldn’t embrace it. It still can’t. Three cheers for Crikey hammering the Coalition on their irresponsible wimpishness. Wentworth voters, this Saturday let’s see you cast a vote for our kids and grandkids. Then three cheers for the Libs’ loss of the seat.