Far-right candidate Bolsonaro remains a firm favourite for victory in the second round of voting in the Brazilian presidential elections. How did this happen?

In the first round of the Brazilian presidential elections last Sunday, the far-right candidate Jair Bolsonaro fell just short of an outright victory. He remains the favourite to win the second round run-off against the Workers’ Party candidate Fernando Haddad.

Bolsonaro’s statements exceed even Donald Trump’s in their violent misogyny, racism and homophobia. His regular promises to exterminate his enemies and his nostalgia for the days of Brazil’s military dictatorship have led São Paulo academic Vladimir Safatle to characterise him as “the classic example of a fascist” and former Pink Floyd bassist Roger Waters to describe him as a “neo-fascist”.

So how did almost 50 million Brazilians end up voting for him? 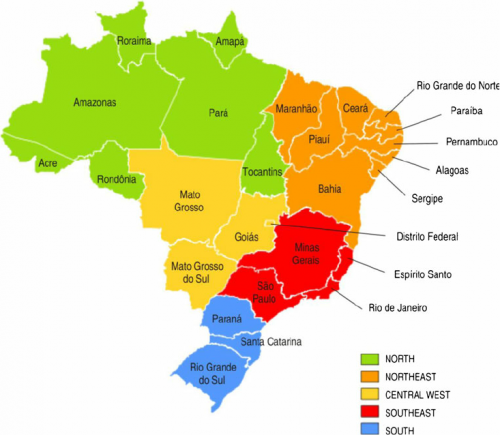 For statistical purposes Brazil’s government divides the country into five regions, with each region comprising three or more states. Over the last two decades a significant divide has emerged in the voting patterns between the northern and southern regions of the country. 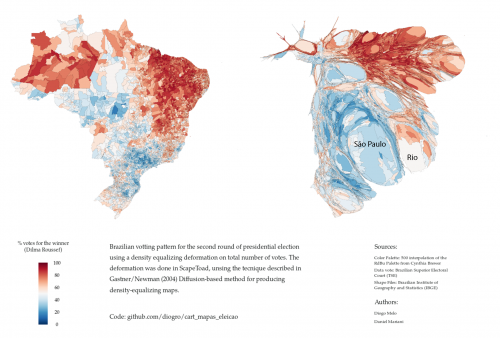 In the 2014 presidential election, Dilma Rousseff of the Workers’ Party won a close victory against the centre-right Social Democratic Party candidate Aécio Neves. The cartogram on the right shows the election result adjusted for the relative population of each municipality.

As can be seen, population is concentrated in the major cities near the coast. In Brazil’s presidential elections, the winning candidate must take 50% plus one of the popular vote, rather than winning the highest number of states, as is the case in the US. 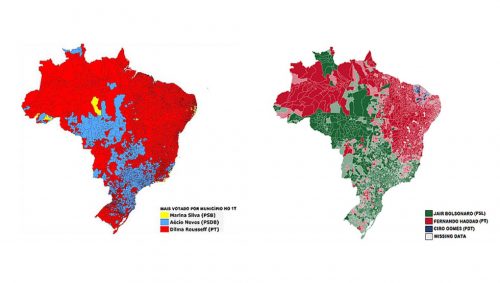 However, following a corruption scandal that saw Dilma impeached and her mentor and predecessor Lula da Silva jailed, Bolsonaro (dark green) has managed to position himself as a cleanskin candidate.

With the Social Democrats also embroiled in the scandal, the centre right vote switched en masse to Bolsonaro. But he also won votes from the Workers’ Party, exploiting anger against the party to take every region except the except the north-east, with critical gains in the south-eastern states of Rio de Janeiro and Minas Gerais. 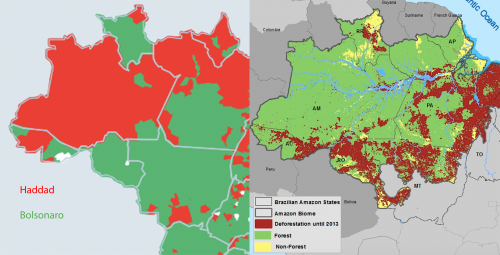 In the Amazon, the areas where deforestation is heaviest and agribusiness dominates, voted for Bolsonaro (ironically coded green in this map). The areas of surviving rainforest, with higher populations of indigenous and other traditional communities, voted for the Workers’ Party. 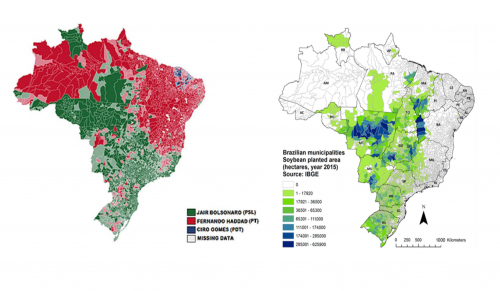 Soybean plantations are one of the principal agribusiness crops and, together with cattle ranching, are a key driver of deforestation in Brazil. In rural areas, particularly in the Central West region, the presence of the soy industry closely correlates with support for Bolsonaro. 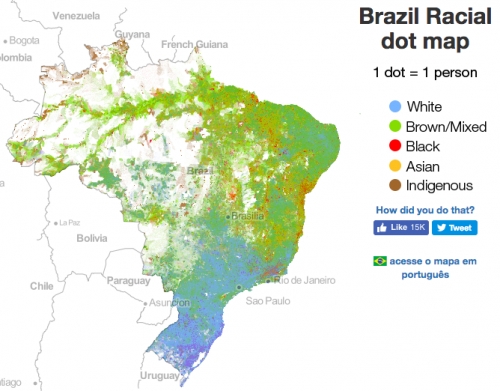 Bolsonaro’s overt racism against indigenous and Afro-descendant minority groups suggests that, like Trump, he would have more support among white voters than other groups. The map above indicates self-identified ethnicity in the 2010 census. Southern Brazilians, on average, identify as being more European, and Bolsonaro’s support in this region was stunningly high.

But that does not explain his support in the northern suburbs of Rio de Janeiro, where ethnic identification is more mixed.

In the northern periphery of Rio, as in marginalised zones of Brazil’s other major cities, evangelical Christianity has been expanding rapidly at the expense of Catholicism in the last three decades. Evangelical drug lords, often converted in jail, wage “holy war” against Afro-Brazilian religions like Candomblé and Umbanda.

Bolsonaro is a Catholic, but has received strong support from the more hard-line Pentecostal churches for his advocacy of “family values” and attacks on progressive gender politics. Soaring homicide rates and open warfare between drug gangs, the police and the military in Rio have fuelled the politics of fear in the city, and certain evangelical churches have helped channel this anxiety into support for Bolsonaro.

Map 9: Catholics and evangelicals in other regions 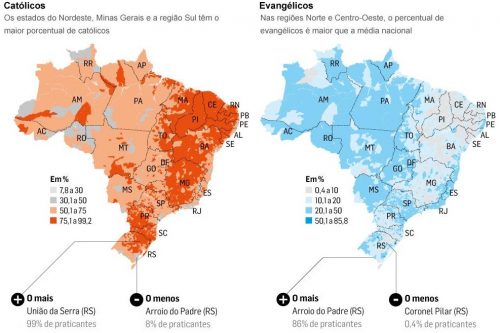 Across the country, Catholicism remains strongest in the north-east, while evangelical congregations have expanded rapidly in the Amazon and the south-east. But these churches are diverse, and not always reactionary: many previously supported the Workers’ Party, and in 2014 others backed Marina Silva, a black evangelical environmentalist. However, in 2018 a significant proportion of Silva’s voters switched to Bolsonaro, assisting him in winning the Northern Region.

Bolsonaro remains a firm favourite for victory in the second round, and his supporters are already following through with threats to murder Workers’ Party voters. His program of violent suppression against both criminals and political opponents has won support across ethnic and class divisions.

The large scale divisions in land use, ethnicity and religious identification shown in these maps illuminate some aspects of Bolsonaro’s rise, but many other factors are playing a part, including the Workers’ Party’s self-defeating pacts with the political establishment while in government, and the high rates of homicidal violence across the country.

One of the only bright spots in the election was the number of indigenous, transgender and Afro-Brazilian women elected to state and federal legislatures. In the coming years they will be on the frontline of both the resistance against Bolsonaro and the difficult task of winning back voters who are flirting with fascism.

Freg J Stokes is a writer and performer, and is currently working on a PhD with Guarani political activists mapping the history of the Atlantic rainforest.

Overall, Freg, well done. I would have had a bit more emphasis on dissatisfaction occurring through social media and the “envy” of Ecuador, Panama and Peru (in about that order). Its less a case of fascism than populism; PHON phenomena (or even Marcon-ism) to force a point.

The tactics worked for Trump so why not Bolsonaro? The saber rattling is unlikely to come to pass – there is the
BRICS economic partnership to take into account – but the it makes the voters feel good and, of course, the sodomites are going to yell “fascist”.

Pentecostal Christians are becoming a dangerous and frightening world-wide problem.

Thanks Fred, great, informative and depressing.