More than 1000 people, including the rock icon, disrupted Racing NSW's advertising in protest of the "absolutely disgusting behaviour by our government".

Armed with phones and torches, more than 1000 protesters gathered outside the Sydney Opera House on Tuesday night to protest and disrupt Racing NSW projections on the Sydney landmark.

When the lights came on at 7.40pm protesters shone lights from torches, phones and laser pointers over the Opera House sails, in an attempt to sabotage the projection, which displayed the barrier draw for the upcoming Everest horse race.

While the barrier draw was brought ahead from the planned time of 8pm to avoid the protest, the lights from demonstrators — and potentially more heavy-duty sources — succeeded in partially obscuring the view of the draw numbers from across the harbour. 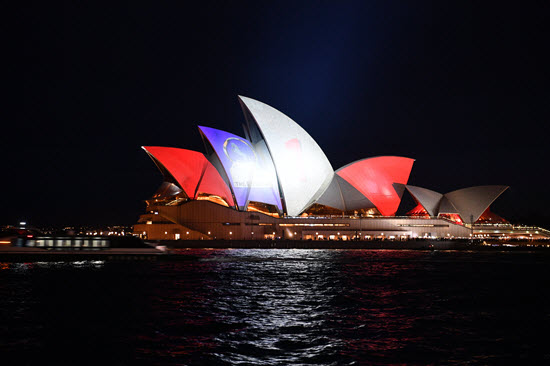 The projections, which followed days of simmering controversy, were met by a chorus of boos from the crowd, as well as a series of increasingly creative slogans, from “shame on you” and “not for sale” to “worst Vivid ever” and “your graphics look shit”.

Australian rock icon Jimmy Barnes, who was among the demonstrators, told Crikey the decision to allow the projection was “absolutely disgusting behaviour by our government”. “I can’t believe they’d degrade such a great part of Australia to advertise gambling when we have such major gambling issues in this country. To advertise on one of our national treasures is disgusting.”

Sydney couple John and Eszter Fellstner, who learnt of last night’s protest over social media, were saddened by the use of the world heritage-listed building for a gambling promotion. “To use an iconic building like this to get a message out that gambling’s actually OK… how sad,” Eszter Fellstner said.

“What are we going to do, advertise brothels on it next?” her husband added.

Jones has since expressed regret on air for his statements, saying “I used some words in these programs about the Everest, and the Opera House, and Louise, which in hindsight I now most regret hearing, having heard the impact they’ve clearly had on some people”.

At Tuesday night’s protest, Greens state member for Newtown Jenny Leong slammed the bipartisan political support for the projections. “We have been facing a broken trifecta of a privatising Liberal Premier, a weak opposition Labor Party who refuses to stand up to the big end of town, and a shock jock that thinks that he runs things,” Leong said.

Despite political support, the projections caused significant outcry in the community. An online petition presented to NSW Parliament on Tuesday morning received over 250,000 signatures.

Early on Tuesday morning, another protest organised by ABC’s The Chaser team saw Jones’ mobile number beamed projected onto the Opera House and other buildings in the CBD. Jones later said he received “anonymous phone calls … every minute” following the stunt.

Tuesday’s protest provided yet another hurdle on a difficult day for Racing NSW. Amid concerns about security and integrity, the barrier draw was conducted in secret before the projection, and all betting on the multi-million dollar horse race was suspended from midday.

Wow, it’s amazing what hills the Right Whingers will choose to “die” upon. Was it really worth riling up the general public, just to appease the racing industry? Morons.

It was either Humphreys of Gillies who declared that Australian politics could not be parodied. Eighty odd years ago Evelyn Waugh considered the phrase “Australian wine expert” hilarious. Even the history of the Opera House reflects the absence of aesthetics among Australians in general.

To a more serious question as to whether Crikey is to be concerned with popular culture or news. yahoo news (and others) confuse the two. I, for one, don’t need to know about the idiotic proceedings in regard to this matter. I would have preferred another article on Marx (or other) in its place.

Can’t agree Kyle. Absolutely the last thing I want to read on Crikey is more ramblings about Marx, or other philosophers instead. BORING!

It was a disgusting thing to project an advertisement to encourage gambling on the Opera House. It’s well past time Alan Jones was sacked, or dragged through the courts again.

Ok no Marx or European philosophers – but what in its place? I think we agree that we could read this stuff (if we were interested) on any of the network news sites and to that end the topic hardly justifies a subscription.

I am interested in topics of interest to you b.b.

But I don’t read network network news sites apart from the ABC or SBS when I have the time; thus, I find it a good use of my time to read this sort of article.

There’s only so much my brain can take in and retain. It’s a daily battle for me Kyle. I try to stick to making comments only about things I have some knowledge of – like the argument BK made about horse racing. Probably that didn’t interest you? Also, I have been known to make comments on subjects about which I am very ill-informed. I can’t imagine what comes over me at such times.

It should be obvious what interests me. I take the time to make comments usually, but not always. I disappear from the comment section of Crikey for months at a time because life gets in the way.

I don’t know how you got to this story old bean but I had to select “Culture” as a subject on the drop own menu.
Imagine the absolute shock then when I found a piece about popular culture!
I mean shit! and me the Dux of my Latin class with the brain the size of a planet.
Pick up your standards Crikey or I’ll hand in my subscription.

There should be no projections on the Opera House – its sublime white sails are an architectural wonder which do not warrant sullying or ‘enhancement’.

The no projections rule should also apply to colours of national sporting teams. As though there isn’t already a plethora of tacky team merchandise everywhere we look.

“projection on the sales.” Lol

I’ve asked this before and I ask it again….what does the Opera House Trust have to say? Where is Chairman of the Trust Nicholas Moore? Why has he made no statement in defence of his CEO who was appallingly bullied on air? Why has the Trust not come forward to comment on the matter, given that it is appointed to care for the Opera House? That the Opera House caved under pressure from Government is surely a failure of governance, not dissimilar to the failures evident in recent goings on at the ABC. And why are journalists not questioning the role and actions (or lack thereof) of the Trust?