Two journalists have reportedly been murdered in particularly brutal circumstances over the past week, including one in his own country’s consulate.

Turkish authorities have told reporters at The New York Times and Washington Post that Saudi Arabian journalist, regime critic and Post writer Jamal Khashoggi was murdered after going to the Saudi consulate in Istanbul on Tuesday.

The New York Times over the weekend reported that Khashoggi had been murdered inside the consulate, dismembered and then removed in diplomatic boxes, which Saudi officials deny. Khashoggi had been in voluntary exile since last year, writing articles critical of the kingdom’s day-to-day ruler Crown Prince Mohammed bin Salman.

Turkish authorities have not formally confirmed the alleged murder, but the government has launched a criminal investigation into Khashoggi’s disappearance.

The Washington Post has published Khashoggi’s columns outside its usual paywall, and on Saturday published a blank space in its opinion section where his column would otherwise run: 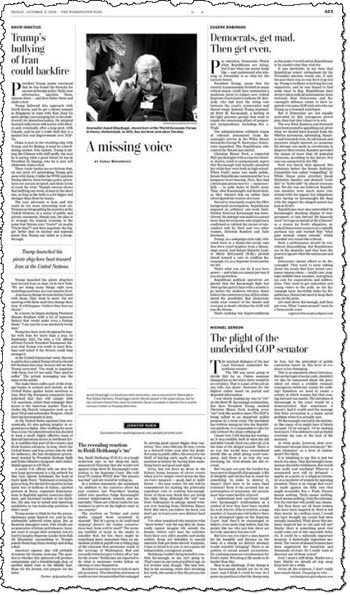 According to Reporters Without Borders, which monitors press freedom around the world, Turkey is the world’s biggest prison for professional journalists, with long sentences “the new norm” under President Recep Tayyip Erdogan. Saudi Arabia, though, ranks even lower than Turkey on the press freedom index — there is no independent media and journalists can be detained, mistreated in detention and flogged for “crimes” including blasphemy, insulting religion, defaming the kind and the state, and endangering national unity.

On Saturday, Bulgarian journalist Viktoria Marinova was found dead in a park, having been raped and bashed, just a week after interviewing two journalists who were arrested last month while investigating the misuse of EU funds. Marinova is the third high-profile journalist killed in a European Union member state in a year.

The Committee to Protect Journalists has called on Bulgarian authorities to conduct a rigorous investigation into Marinova’s death. Bulgaria is the lowest-ranked EU member on the World Press Freedom Index, with increasing numbers of threats and attacks against journalists recently.

In October last year Maltese journalist Daphne Caruana was killed by a car bomb near her home, and in February Slovak journalist Jan Kuciak and his fiancee Martina Kusnirova were shot dead. Both Caruana and Kuciak had been investigating corruption cases.

If the tuber gets his way, along with his murdoch mates, I can see the same thing happening here.

Looking good all round really. Fake news, alternate facts, no such thing as truth and if that fails just kill them.

For all the journalists moaning about being sacked, and if tainted by having done the mudorc’s malign bidding no longer employable, at least that’s the worst of it here.
However, as Gymnorhina notes, if the Gestapotato had his druthers it would be decidedly more hazardous for honest reporters.