Not all horses: a response to The Daily Telegraph

I respect my colleague Trapeze Artist, as an athlete and as a horse. He is a good boy with fine strong teeth, but I disagree with his views on this Opera House controversy.

My name is Brave Smash, and I am a horse. As a horse I rarely get involved in the political discourse, because I believe that I can best serve my community by doing my very best to run as fast as I can and eat all my oats, leading by example rather than dictating to others. However, I feel compelled to write today in response to my colleague, Trapeze Artist, and his comments as reported on the front page of today’s Daily Telegraph. 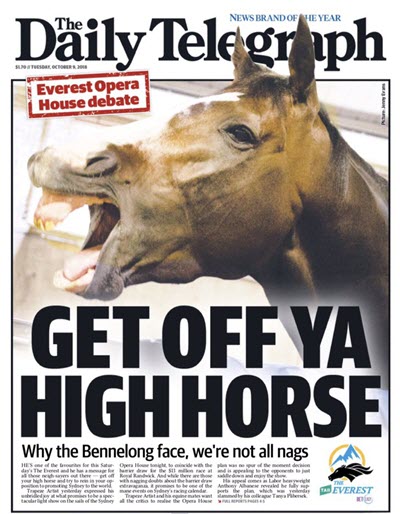 Let me make one thing clear: I respect Trapeze Artist, as an athlete and as a horse. He is a good boy with fine strong teeth, and I believe he has every right to state his opinion as he sees it. But on the subject of the projection of promotional materials onto the sails of the Sydney Opera House, I believe he has pulled the wrong rein (that is a little horse racing pun that I thought you might enjoy).

I would hate for the public to get the impression that just because Trapeze Artist believes the proposed projection is appropriate, that this is the consensus view of the equine community. Not only is it not true, it perpetuates the damaging stereotype that all horses think the same, that we are in lockstep on all important social and political issues.

Frankly, I believe the proposal to promote the Everest Cup — a race I am proud to be a part of — by turning one of our country’s most beloved landmarks into a billboard cheapens and demeans the sport we love so much. When I think back to my days as a foal, when I would frolic and prance around the paddock, care-free and filled with that exuberance that only the innocence of youth can fuel, I had dreams. Dreams of one day racing in front of thousands of cheering people. Dreams of galloping past the post, heart swelling with pride and euphoria and a certain amount of over-exertion. Dreams of having a fancy thing draped around my neck and having people pat me on the head and say “Good running, Brave Smash, you are a good horse”.

These were dreams of sporting glory. They were not dreams of billboards, World Heritage-listed or otherwise. That little foal in the paddock all those months ago dreamt only of the thrill of the contest: the exhilaration of running as fast as possible while a small man sits on me and occasionally hits me.

It’s exciting to me, as a horse and a sportsperson, to be living that dream right now, but I can’t help feeling it’s been sullied somewhat by this Opera House contretemps. For I am not just a horse: I am also a patriot. And as such I have no desire to see the icons of my country besmirched by base commerce. This is not why I got into this business: I got into this business because a man put a thing on my head and a thing on my back and told me to run. And now that means a little bit less.

Brave Smash’s response was transcribed with the help of Ben Pobjie.

11 thoughts on “Not all horses: a response to The Daily Telegraph”