The new line from the business lobby is that our economic growth is "just luck". In fact the refusal of politicians to obey their demands has been crucial to that "luck".

Behold the new economic narrative from the business lobby: Australia’s economic success, despite refusal to adhere to its demands, is just luck. Or, in the words of Business Council head Jennifer Westacott: our economic growth “is not being driven by the one thing we can control, which is productivity, but is being driven by luck. You can’t bank luck”. James Pearson of the Australian Chamber of Commerce and Industry endorsed Westacott’s critique in The Australian, warning about the lack of industrial relations reform.

Australia’s continuing economic growth — 27 years and counting — and its low unemployment are doubtless a source of dismay to the business lobby, which for a decade has been lamenting our failure to implement “real reform” — returning to WorkChoices, further disempowering unions, cutting government spending, increasing consumption taxes and cutting company taxes.

That’s why in 2016, then-ASX head Elmer Funke Kupper lamented about the financial crisis that it was “almost a shame… if you ask me personally, we didn’t have a deeper downturn to wake us up [to] the heavy lifting that we’re going to have to do”. Infuriatingly, luck has intervened to keep us asleep.

The one area where the economy isn’t delivering, wages growth, isn’t on the radar of Pearson or Westacott — understandably given wage stagnation is great for business. From their point of view, wages are stagnant simply because Australians don’t work hard enough: both Westacott and Pearson insist wages growth will return if productivity increases. The RBA agrees productivity increases are needed to wage rises, but what’s been happening is that the corporations represented by Westacott and Pearson have been abusing their labour market power to keep productivity gains. You may not be able to bank luck, but businesses have been banking their power over workers.

That’s why real unit labour costs — which measure labour costs per unit of output, have fallen nearly 3.5% in the last five years — more than at any time since the ABS began recording it in the 1980s. And that’s not just the case in Australia: the OECD found last year that “over the past two decades, aggregate labour productivity growth in most OECD countries has decoupled from real median compensation growth, implying that raising productivity is no longer sufficient to raise real wages for the typical worker”.

As their support for a return to WorkChoices shows, Westacott and Pearson don’t actually seem to care about productivity. Their only focus appears to be on the bottom lines of their members, which will benefit from industrial relations laws that allow companies even greater power over workers, in order to push wages down further, even if it undermines productivity. 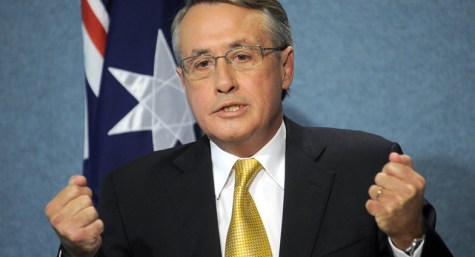 The road not taken: reflections on the global financial crisis

Australia is indeed lucky. We’re a highly educated, developed and resource-rich economy on the edge of the fastest growing part of the global economy. But more than a quarter of a century of growth wasn’t achieved through luck alone and, despite the “lack of reform” narrative of the last decade, it wasn’t luck that got us through the financial crisis — it was the willingness of Kevin Rudd, Wayne Swan and the RBA to support the economy with fiscal and monetary stimulus, thereby averting a catastrophic recession.

It was Wayne Swan’s fiscal discipline that prevented a mining investment boom from creating an inflation explosion like every other mining boom in our history. It was Labor’s willingness to give up the return to surplus in 2012 — a decision the BCA backed at the time — which prevented a much more serious downturn in 2013 (and Hockey and Abbott similarly made the right call in the 2014 budget). And it was Labor’s re-regulation of industrial relations after WorkChoices that — even if in retrospect it didn’t go far enough — made sure that Australians only endured wage stagnation.

In other countries, with poorer industrial relations protections, workers have gone materially backward in the last decade, creating the political circumstances for Trump, Brexit et al.

If the likes of Westacott and Pearson had had their way, that’s where we’d be right now.

Oh please, Bernard. The 2014 budget scrapped a number of extremely reasonable revenue raising measures (like the Carbon Pricing Scheme, Mining Super-Profit Tax, changes to Transfer Pricing & Thin Capitalisation), whilst instead looking for savings in areas like Education (where promised funding across the forward estimates was withheld), Health (where the Medicare Rebate was left frozen long beyond the intended date & promised hospital funding was withheld), Welfare (Robo-debt, kicking people off of the DSP etc) & cutting funds to the ABC & SBS. Yet they still managed to almost double the deficit left behind by Labor, as well as created the conditions that led to declining wages.

The disconnect is real. The zombie apocalypse of neoliberal thinking will not die.

As I’ve said often, the productivity figures are as dodgy as all get out, however they are measuring something (I’m just not sure it is productivity, or an approximation of a sense of a theory about productivity)

In any case, the past decade and more has seen business taking the bulk of the profit and workers eking out an existence against the backdrop of services formerly provided by government now being provided by a privatised group who charge twice as much, or more.

What happened to the ‘wages will rise when company profits rise’. Did that get junked after 18 months plus of business profits rising with no appreciable wage increases?

big business and the wealthy love recessions, they can buy up property at bargain prices, introduce lower and lower business taxes, force wages down even further,jack up the GST cut social and medical services and yet the fools that support them are from the lower classes, without that support they could not control governments and the people and force slave like wages and conditions on them .

I am ever grateful to the BCA and the ACC for making it so clear that the only thing in which business is interested is profit, however that rent can be extracted – not social good, not equity, nothing but profit. I hope they continue to push for a return to the draconian period of Work Choices. That will almost guarantee the LNP gets a belting at the next election and Labor will then better balance the interests of capital and labour. That social relationship is certainly not balanced at the moment, evidenced by wage stagnation.

“If only the value of one’s vote was proportional to the size of one’s own wealth…..”