Welcome to Side View — a curated guide to new and overlooked content on politics, policy, and public affairs. This week: James M. Cain goes to Appalachia, the Australian way of poverty and annoying TV heroines.

This brave person says shut up and stop complaining about flying — it’s marvelous. What’s the bet they travel business class? Why is public transport commuting in the US so terrible? A look at how US transit systems fail with some notable exceptions like New York. Meanwhile, the French are investing over 13 billion euros in new transport infrastructure to 2022, 51% of which will be in rail, with the goal of doubling rail’s share in and around urban centres.

As any public servant knows, there are lots of ways to try to hide embarrassing information. Take Australia’s growing greenhouse emissions, which reached a nadir in 2013 but have surged since then. The most recent figures, for the March quarter, were released by the government late last Friday —  a classic PR technique. They show emissions have continued to rise. But a while back — at about the time we signed up to the Paris agreement — the Department of the Environment changed the way it displayed the data: from showing total emissions to showing per capita emissions. Compare the pages for the September 2015 data and the most recent page: 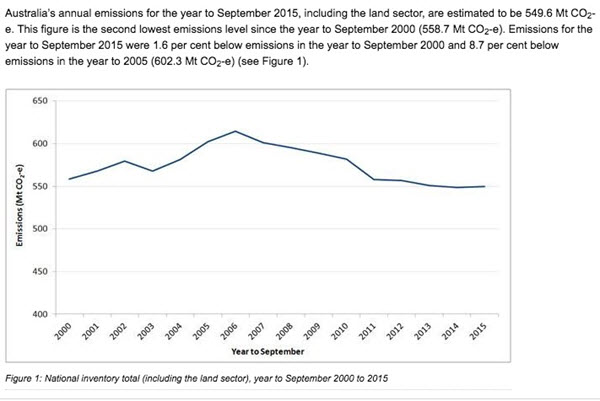 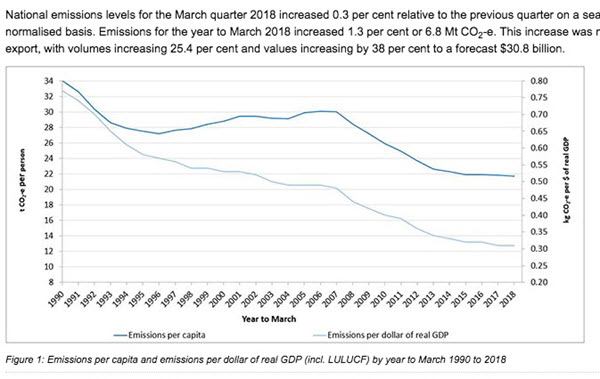 When what you really want is total emissions, which you have to go to page 5 of the current PDF report to get: 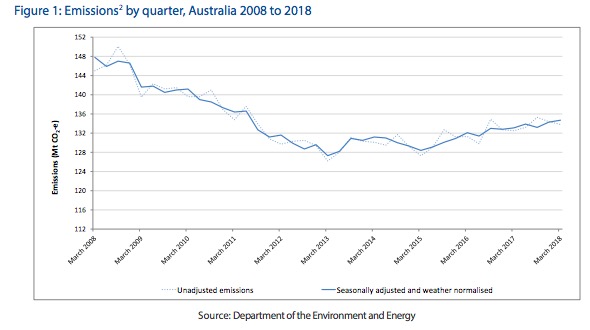 Maybe the government thinks just because our population is increasing, the atmosphere will give us a break from climate change. Too bad the laws of physics don’t work that way.

You probably need no encouragement to think Facebook is awful but will its latest scandal, a hack involving the accounts of 50 million users, actually damage it? Probably not, goes one argument. It is even selling “shadow data” that users haven’t provided about themselves to advertisers. No wonder some nanny-state types in the UK want to develop another set of “health” guidelines for us to ignore en masse: social media limits. Then again, when people give their data away for free for coffee and a chance to be advertised to, maybe we should just surrender to the dystopia.

But Facebook plays a different role when it comes to encryption. Like Apple, Facebook has decided to fight government efforts to force it to breach its own encryption systems. This debate will soon be had in Australia with the government’s absurd and draconian new anti-encryption laws. And my understanding of the view within Facebook toward these government attempts to undermine encryption is of the “over our dead body” kind.

Jane Gilmore’s account of her descent into poverty and near-homelessness is one of the best, most searing things I’ve read this year. I’ve never bought the hype about how workers love the gig economy and this won’t encourage me either: gig economy wages are falling in the US. In 1922, James M. Cain, at that stage a young journalist, went to West Virginia to cover the war of coal-mining bosses on efforts to unionise Appalachian miners (it was literally a war, with mass murder and aerial bombing). What the future hard-boiled noir novelist and screenwriter saw would shape much of his future work, and not positively – but, Sean Carswell notes, in ways that are crucial to understanding the appeal of Trump. Stick-to-it-ness and resilience are good characteristics, right? Well the half-time retirement of an NFL player has sparked debate about whether you should quit or stick at something when it’s not going well. Turns out it’s not so simple.

WHERE I END AND YOU BEGIN

Was the election of Trump a Newtonian reaction to Barack Obama? John Rentoul argues it may have been, but not in the way many think. Perhaps Obama could have been a more-than-useful literary critic given his college musings. But let’s not forget that rare Obama-Trump unity ticket: US support for the ongoing war crime that is the Saudi-led attack on Yemen, driven by a zero-sum game US mentality regarding Iran. Of course, what happens when your own client state gets too close to Iran? Threaten to cut off aid?

Scarlett Harris on why we find unlikeable TV heroines so much harder to stomach than the likes of Don Draper, Walter White and Tony Soprano. While the circus of frat boy Brett Kavanaugh’s Supreme Court confirmation goes on, Ruth Bader Ginsburg’s Supreme Court confirmation process wasn’t smooth either, though not for reasons you might think. And Robyn Williams tries to be optimistic about climate change. 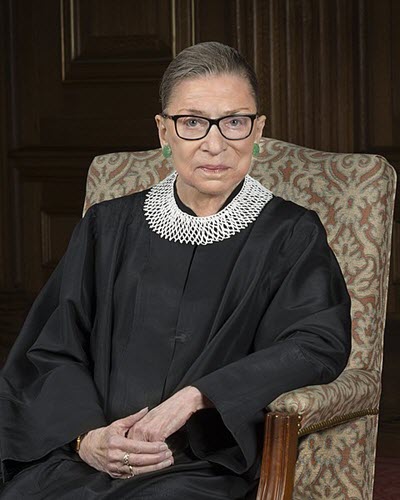 THESE ARE MY TWISTED WORDS

I first encountered Joe Orton in Year 12 when I saw a production of Funeral Games put on by NIDA (with <eyeroll> Baz Luhrmann) at the tin sheds at UNSW. This is a fantastic podcast exploring Orton’s life and legacy and the reception of his plays, and even grapples with his sex tourism.