Tony Abbott chased out of everywhere

Tony Abbott apparently not welcome anywhere, the truly amazing number of boxes to tick before you can play the national anthem, and a hardstyle remix for New South Wales’ premier. From the Crikey grapevine, it’s the latest tips and rumours …

Man Abbott town.  Just as John Farnham was fond of endless “farewell” tours, former prime minister Tony Abbott, now that he’s achieved his life’s ambition of making the Liberals unelectable, has been on more of a “please retire” tour. After his apparent ducking of a teenager’s question on climate change, there was that unpleasantness when he was booed out of the town of Borroloola by a group of elders, educators and parents — a stinging rebuke to Abbott’s cynical, politically expedient appointment to the role of special envoy for Indigenous Affairs. Then there was the “miserable ghost” jibe from Malcolm Turnbull. We also hear from tipsters in his electorate that his new federal electorate conference chair, the “pokies king” Roger Corbett, was the target of campaigners. The campaigners urged members of the Warringah Liberal Party FEC “to support an alternative candidate who is prepared to get behind long overdue gambling industry reforms”.

Plus, last week about 100 protesters from his electorate of Warringah gathered at a talk titled “Pulling Out of Paris”, featuring Abbott and his clone gone wrong, Liberal backbencher Craig Kelly. They were there to protest his full decade blocking any reasonable action on climate action.

The house that Feeney renovated. You’d be forgiven for forgetting about that lovely investment property in Melbourne suburb Northcote that landed former Labor MP David Feeney in such bother in the lead up to the 2016 election — after all, Feeney sure did. He also needed prompting on whether he’d negatively geared the joint — he had, despite Labor’s stated opposition to the process. And then, like an investment that just keeps yielding great returns, the whole thing got even funnier, with his tenants putting up Greens posters.

Anyway, a tipster tells us that  — roughly a year after those guys moved out and the renovations that had apparently prevented Feeney living there had commenced — the new place is finally done and occupied again. And judging by the new political advertising choices, it looks to be Feeney. 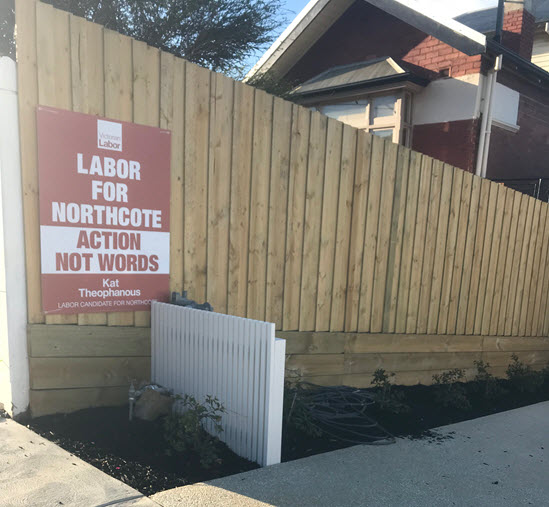 You must obtain the commonwealth’s permission to use the Australian national anthem for commercial purposes, including when:

Perth muso Mutley O’Muttlesson found this out when his band The Higgledy Pigglets was about to release an album containing a track called Auspol — which ends on a coda of a punked up version of the national anthem. He applied to the Department of the Prime Minister and Cabinet, who said “the tune and tempo of the anthem in your rendition are modified so we are unable to approve your proposal”. Which raises the question: was Ms Tips’ primary school breaching the Commonwealth’s copyright every time those tone-deaf nine-year-olds mangled the melody beyond recognition? 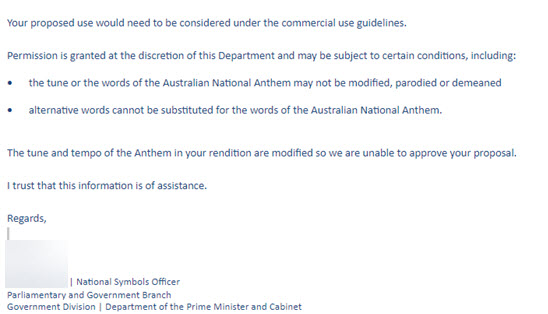 The strict application of commercial use seems a tad finicky in itself, given the proceeds of the album were going to charity (government favourites the Asylum Seeker Resource Centre). O’Muttlesson, for his part, was just surprised it was the song’s tempo that tripped him up.

“If I’m honest, I never expected to get the song approved,” he told Crikey. “I just thought it’d be the bit where I call them all a bunch of cunts they would object to.”

It’s a hardstyle life for us. Say what you will about the lifestyle habits of the average raver, at least they have a sense of humour.

Last month, two people died of drug overdoses at Defqon 1, an electronic dance music festival held in Sydney. Rather than even exploring the sensible, expert-backed option of pill testing, NSW Premier Gladys Berejiklian went full prohibitionist. Vowing to shut down Defqon 1, she defaulted once again to the tired “drugs are bad” script that has so far done roughly nothing to stop young people dying of overdoses, but probably plays well with her older suburban base.

Capper cash catch. AFL aerial master Warwick Capper hung up the boots years ago. So you’d expect his talent for dazzling fans had long since ossified, right? Wrong. After watching a video sent to us by a tipster, Crikey can confirm that the Wiz has still very much got it.

In this video, Capper is seen at the Great Northern Hotel in Melbourne’s inner north, entertaining a rapt bunch of blokes with tales of conquest and domination on the footy field. He kneels on the shoulders of a partygoer to re-enact one of his classic marks, and even flexes his bicep at one point.

The only question is why?

Seems the man renowned for his Agnetha Fältskog locks and body-hugging footy shorts has jumped into bed with a buck’s party-planning business. For a minimum $2500 you can hire the Wiz to come to your buck’s for two hours and tell “outrageous stories”. They’ll even throw in a “signed framed piece of sporting memorabilia” and “online itinerary you can share with the lads”.

We have no idea whether this is a fair price. We do know that the film catalog IMDB lists Capper in an uncredited role as “Braindead Prisoner” in Christopher Lambert’s 1992 not-quite-blockbuster Fortress.

Do you know of any former greats making a buck in a creative manner? Write to us!

Australians all let us be cynical: PM’s anthem change a one-word flop

Nobody likes toned abs and he doesn’t care. What else can he do really, the papal throne is occupied and going back to the seminary isn’t an option, all that kneeling and self denial is beyond his capacity now he’s had a taste of the freewheeling life of snout in public trough.

It is up to the electorate of Warringah – one of the highest YES votes in the SSM optionaljunkmailopinionpoll, relatively highly educated and presumably therefore aware of climate change.
Just.Do.IT!

The song, laughingly refered to as the National anthem, is a turgid dirge.

At some stage it might dawn on people that he isn’t listening to anything other than the voices in his head. When they stop and the silence overwhelms him we’ll be free of him but until then …

who is leading australia at the moment, what a stupid question, Rupert Murdoch of course, he`s head of the liberal party and as such is really the P.M Turnbull thought he was leader/ P.M but Rupert soon put him in his place and showed who was the boss.