The Department of Environment and Energy quietly released a concerning report while everyone was preoccupied with AFL and NRL. This marks Australia’s 15th quarter of consecutive increased annual emissions.

The release of six-month-old, record-breaking greenhouse gas figures late last Friday was met with cynicism, outrage, and a solid shot at spin over the weekend. More importantly, it caps off four consecutive years of emission increases and exposes any pretense that Australia will meet its climate obligations.

In the lead-up to the weekend’s AFL and NRL grand finals, and coinciding with the banking royal commission’s interim report, the Department of Environment and Energy released a quarterly emissions report demonstrating a 1.3% annual increase to March 2018.

For critics, the timing is suspicious. Just last week, the Climate Council were calling out the government’s six-month delay and, pointing to other releases timed around Christmas Eve, acting CEO Dr Martin Rice painted Friday’s report as a “cynical attempt to avoid scrutiny”.

But timing aside, the fact is Australia increased its total output by 6.8 million tonnes of carbon dioxide equivalent (Mt CO2-e) from March 2017 to 2018. It’s Australia’s 15th quarter of consecutive increased annual emissions and, excluding unreliable land use data, proof of Australia’s highest recorded level of carbon output at 536.7 Mt CO2-e.

At a time when places like the UK are down to 1890s levels, this result raises questions about how long Australia can go without a carbon price. Though this was implemented for just two years (2012-14), we know it helped decrease total emissions (1.4% in that final, second full year).

Our latest annual jump can mostly be attributed to Australia’s expansion in gas exports and production, which pushed our fourth largest sector (fugitive emissions) up by 13.7%. Australia also saw by a 2.1% increase in our second largest polluter (transport) and a 4.1% jump in our third (stationary energy excluding electricity, i.e. heating).

This was all offset by a 4.3% decline in Australia’s largest polluter, electricity emissions, and thanks largely to reduced demand, Hazelwood’s 2017 closure, and the growth of renewable energy.

For more on that point, Prime Minister Scott Morrison told Insiders on Sunday that Australia has “hit the threshold point, where the investments make sense, increasingly, without subsidies”.

Morrison, it needs to be said, does a strong job emphasising the 28-year-per-capita low, and is correct in putting much of this electricity progress down to the 2020 Renewable Energy Target, CEFC and sheer economics. But it’s more difficult to claim credit for it. Add in state and territory action (including South Australia’s new Liberal government), and we have four success stories the federal government either had nothing to do with, tried to kill, actively undermined, or just announced they will let die in 2020.

There’s also Morrison’s assurance that, with a climate policy vacuum and plan to end the RET, Australia will meet its 2030 Paris target of a 26% reduction on 2005 levels at “a canter”, and admission that “none of us are Nostradamus in this”. Crikey has sought clarification on the former point, but has not received comment before deadline.

Both of these statements fly in the face of work done by the Australia Institute, NDEVR Environmental, ClimateWorks Australia, the United Nations, and the Australian government, with the Department of Environment and Energy projecting last year that, under current policies, our 2021-2030 emissions reduction task will be missed by 868-934 MtCO₂e. 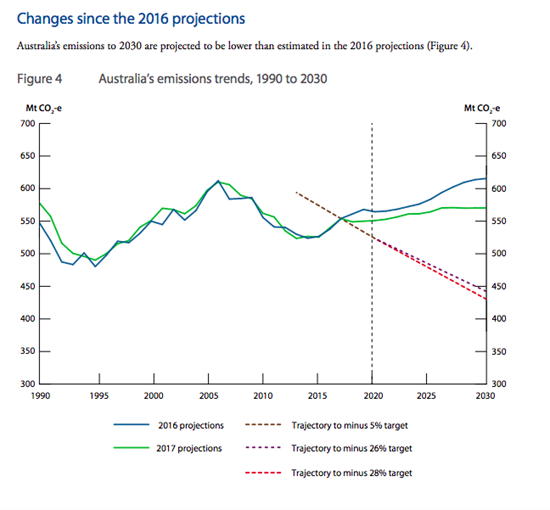 The Climate Council’s Martin Rice tells Crikey that even Australia’s 26% commitment is “woefully inadequate and is not aligned with what science says is necessary to effectively tackle climate change”.

Scott Morrison has addressed these concerns over targets in relation to Labor — and will likely do so more frequently as election season approaches. “Labor has a 45% emissions reduction target, we all know what that will do,” he said. “It will put up electricity prices by $1400 for every household in the country.”

Does that stack up? A recent Frontier Economics report found Australian households will experience savings leading to 2030 where policy remains business as usual or moves to 26%, 45%, and 65% targets, with “45%” exceeding “business as usual” prices by roughly 0.02%.

What do you think of the government’s handling of this issue? Get in touch at [email protected].

As a predictor of electricity prices Morrison lacks any credibility. He has been a minister in Coalition governments under which the price of power has ballooned.

And hasn’t his ascendency to Prime Minister also killed off the NEG which was supposed to save peasant households hundreds of dollars per year? That aside, we continue to revel in the alleged $550 annual windfall which Abbott promised in axing the carbon tax.

“Mozzy” was on Insiders yesterday, telling us how “we” are going to meet “our” emissions reduction targets in a “cantor”? ….. Eddie died 54 years ago, come Wednesday week?

New South Wales was “born” on 26th Jan 1788 if anything was. Perhaps the States that were at that time wholly or partially within the imaginary borders of NSW could be included. That still leaves the inclusion of all Indigenous Australians and everyone in the western third of the continent, never part of the NSW colony, in a celebration of someone else’s “birthday” without any good reason. If anything proves that Indigenous Australians have nothing to do with a colonial celebration it’s the fact that until well into the second half of the twentieth century Indigenous Australians were not Australians. They were not counted in the Census and if they wanted to become citizens they had to apply and be approved. Even if they served in the Armed Forces they were not entitled to the benefits given to non Indigenous service personnel on their discharge.

Carbon taxes are ineffective unless consumers of energy get to choose the power of lower cost. We should be able to choose the source when we pay our bill.

Great idea. But here comes Boris, the UK’s Tony to get them out of the EU and send those emissions right back up again. Just a guess

yesterday’s “Insiders” should be compulsory viewing for anyone who wants to know about Morrison. He was just appalling. He accused Cassidy of editorialising, went on to do some truly creative editorialising himself, lied about Emma Alberici’s report, then wound up with a personal threat to the ABC. Very classy.

He lied about meeting the (woeful) 26% reduction target and has publicly removed pretty much all policy regarding emissions reduction from the government’s agenda. That’s how this government handles the issues raised in this article.

Maybe he thinks his god will sort it all out? He certainly has no ability himself.

Was he lying before or after he got down on his knees to the sky fairies? Not that it matters, it’s amazing that he considers himself to be staunchly religious, but has more in common with Judas Escariot than any of the other characters.

Oh, and I loved Cassidy’s comment that the ABC people didn’t stop working.

……”we still have the Clean Energy Finance Corporation”. No thanks to this mob. They wanted to scrap it almost as soon as they took office, only the senate prevented them from doing so.

……”and we still have the Emissions Reduction Fund”. Oh, is that the supremely dodgy “Direct Action” policy set up by Abbort?

Sheesh, if that’s the best this mob can do, then its no wonder they’re so far behind in the polls.