Lucas was at first temporarily suspended, which was then made permanent because her account had posted threatening or violent content.

Comedian and (formerly) prolific tweeter Becky Lucas has been banned from Twitter over an #auspol joke about beheading Prime Minister Scott Morrison.

Last week, Lucas joked online that she would like to “chop off” Morrison’s head — a phrase she often uses as a joke with her friends, she told Fairfax over the weekend. 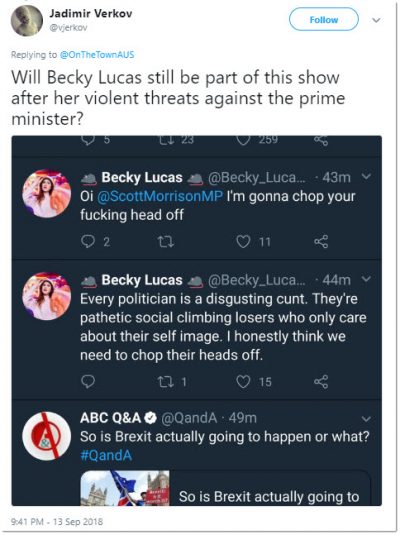 She was temporarily suspended, which was made permanent because her account had posted threatening or violent content.

In a statement from Lucas posted to Twitter by comedian Cameron James, she pointed to the hypocrisy from Twitter in banning her over a joke, but allowing threats against women: “I guess I learnt that we should never make jokes about the Prime Minister because it’s very serious, as opposed to the threats of rape and assault that women get from men on Twitter,” she said. 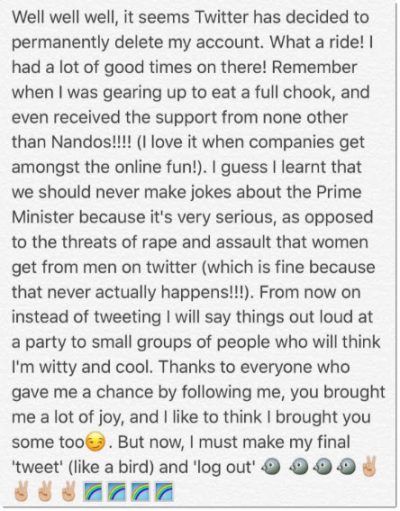 She said to Fairfax that she’d received threats online and nothing had been done about them: “If a guy says, ‘I’ll kill you’ it’s like, yeah, you probably could. There’s a listing of my gigs out there. If I joke that I’m going to chop the PM’s head off… as if? Mine is so clearly absurd. It just came from a bit of frustration and silliness. Honestly, I was just laughing when I wrote it. The lack of humour annoys me.”

Lucas was a stand-out panelist on Network Ten’s pilot show Disgrace! which aired in August, hosted by former Senator Sam Dastyari and focussing on scandals.

Twitter has come under continued criticism for allowing violent threats made by users — it was the last of the internet giants to ban right-wing conspiracy theorist Alex Jones last month for breaching its “abusive behaviour” rules. In August, Australian neo-Nazi Blair Cottrell was suspended for a week from Twitter over “hypothetical” comments about raping Sky News commentators, but his account is now active again.

A spokesman for Twitter told Crikey they could not comment on individual cases, but said Twitter had a zero-tolerance policy towards violent threats, and that its violent threats policy defines a threat as: “A specific violent threat is a declarative statement or announcement of intention to cause physical harm or inflict serious pain/injury to another person or target.”

What do you think of Twitter’s decision to ban Lucas for this tweet? Write to [email protected].

Google Facebook Twitter and others like them are now in charge of censorship. They do it without oversight from anyone. What an excellent way to take over democracy. They can seamlessly skew public opinions and change world governments, and nobody will notice. Brexit and Donald Trump happened because of free votes. The social media giants won’t let that mistake happen again. (Cnet:- MOUNTAIN VIEW, Calif.–Few Silicon Valley companies have ever embraced a political party as passionately as Google has. Its executive chairman, Eric Schmidt, has been described as a “kind of guru” to President Obama’s campaign manager, and Google employees emerged as the No. 2 donor to the Democratic National Committee in the last election.)

Yes, all very interesting but do you think Twitter should moderate posts by users that suggest violence against another person?

Let’s face it. If you really wanted to do damage to ScoMo’s limited mental capacity you’d kick him in the arse.

Life’s hard enough for moderators without them having to accept “I was joking” as an excuse for an unambiguous violent threat.

If we threw her in jail for it that’d be a problem, but kicked off Twitter – pah!

I’m old fashioned enough to assume that a comedian had to be.. err, amusing.
Mind you, there is plenty that is inherently ridiculous about twits but, funny?
Nah,

No mods, no masters.