The science behind attribution has become increasingly sophisticated over the past decade and, with increasingly stark data, relatively clear cut.

Discussing the role of climate change in contemporary weather extremes has led to flippancy, defensiveness (Malcolm Turnbull could barely broach the subject of rainfall variability without getting warned by the Nationals), or, for less scientifically minded former prime ministers, comparisons to animal sacrifice.

But while Australia largely ignores the impact of climate change, recently embarrassing itself at the Pacific Islands Forum, the science behind attribution has become increasingly sophisticated over the past decade and, with increasingly stark data, relatively clear cut.

Studies as far back as the early 2000s found links between climate change and the likelihood of certain weather events, notably the 2003 European heatwave, but leader of the Earth System and Climate Change (ESCC) Hub, David Karoly, says there was still a “science opinion on this ten years ago, [that] scientists couldn’t identify a clear human contribution to extreme events [and] couldn’t separate it from natural variability”.

“And so some people were, and still are, of the opinion that for all extreme events, scientists are unable to identify a human-caused contribution,” Karoly said. “That is no longer correct.”

Both the ESCC Hub and Climate Council have published recent collections of local attributions studies, while the American Meteorological Society offers a global compilation in their 2016 report “Explaining Extreme Events from a Climate Perspective”. The report ran parallel to their annual State of the Climate research and outlines both clear-cut cases (i.e. jumps in liability for coral bleaching events) as well as more complex areas of research (frost risk over south-west Western Australia).

While denialism and disinterest clearly play a strong part in a political discourse, typified by Australia’s agriculture minister declaring he doesn’t “give a rats” if the drought is “man-made or not”, there’s also more understandable confusion around attribution.

Significantly, Karoly says there’s the difference between “amplitude” and “frequency” of extreme events. This means that while disasters like bushfires might not be that much more intense compared to historic records, they are more frequent; for cyclones, it’s the reverse.

And there are other complicating factors: the exponentiality of the impact of just a degree or two increase in global temperature; the range of different methodologies used in attribution; and even simple linguistic challenges.

Science, it turns out, is hard.

“[But] if you ask an appropriate question: not ‘was this event due to climate change or was it due to natural variability?’, but ‘what is the relative contribution to the frequency of this event, or the amplitude of this event?’, scientists can make relatively clear, high confidence answers.” 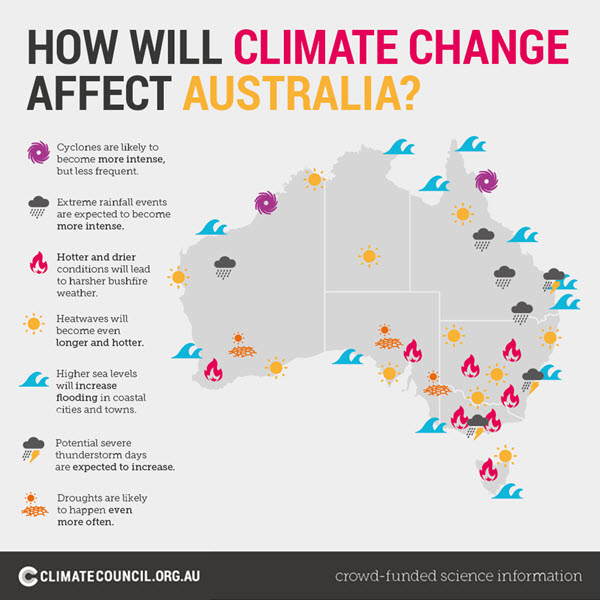 Because observations don’t inherently specify a cause, attribution researchers then run climate model simulations, which can involve comparing counterfactual experiments to real-world shifts.

Effectively, this involves “parallel universes … for a world in which there has been no human-caused climate change: no increase in greenhouse gasses, no warming of the ocean temperatures”. The better the long-term data, the easier it becomes to find a “climate change signal”.

On the flip-side, attribution becomes trickier when observed data involves more complicating factors (i.e. the effect of wetter atmosphere, shifting circulations and heatwave-related evaporation events on droughts) and/or is not as well-represented in global climate models (hailstorms, tropical cyclones, etc). 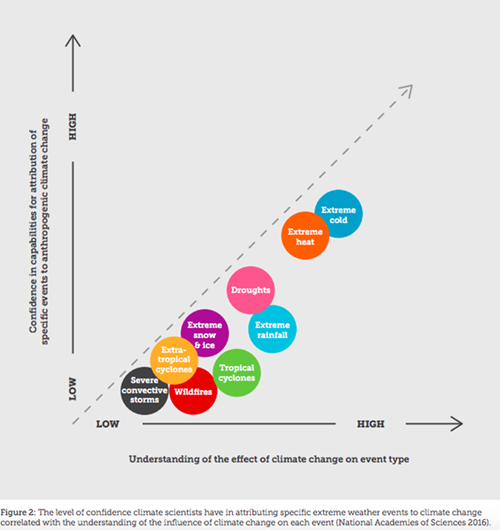 This has not stopped groups such as the The World Weather Attribution Project attempting near real-time attribution data for all weather extremes. In terms of the future, there are lesser-known knock-on impacts to consider, such as airborne dust, and work on better modelling “for bushfires, for tropical cyclones, for droughts … and often that means going to higher spatial resolution”.

But responsibility for the actual next stage of attribution research, adaptation and preventative strategies, lies not just with subsequent research agencies but a political and media class willing to listen and, as flippant as it might sound, even defer to the experts.

Your last paragraph sums it up perfectly, Chris Woods. If only we had “a political and media class willing to listen and, as flippant as it might sound”: absolutely not flippant from my POV, “even defer to the experts”. If only…..

Australia’s agriculture minister may not care if the drought is man-made, but the farmers do. Currently, the Bureau Met. is warning that another El Nino might set in later this year — and thus extend the drought. The trend is clear, and the farmers know it.

Reading nuances of the climate trends from the experts is fascinating to those of us respectful of their expertise. But gentle souls like Prof Karoly should not have to argue the toss with the wilfully ignorant. We should deal with them ourselves, and we can lead with the emphatically true assertion: The trend is clear!

On the one hand Chris, a commendable effort. On the other the essay could have been rather more detailed without the necessary justifications to authority as you have presented them. The references (links) are useful but as you assert “science is hard” or, as Newton put it, “one has to have the wit in order to read the pages of nature”. Appealing to the number of undergraduates for a BSc in the 70s (when matriculation was real) only about 1% of the population have the wit to read the pages of nature or about 2% of one includes the engineers. Your links are useful for useful idiots; a tad harsh but real. My advice to you is not to mess about on this matter (see below).

As to “deferring to the experts” the entire PC-post modernist perspective is intent on confronting this imperative. The article of faith, here, is that there can be no grand paradigms and hence no assertion that is not either politically or culturally relative. With this “queen” on the board one has to bring out a bishop and a rook in the name of Ayer and Popper (or even Hume).

The issue is almost a function of the Oz/NZ education system. In countries such as France, Germany and to the north philosophy is a school subject. Even at dinner parties in Oz/NZ its a dirty word. While we have evidence aplenty there is the entrenched view of “my opinion is as good as an experts” and this mentality is near enough to a (Liberal’s) polies mantra.

What about some graphs and some mathematics (basic first and second order D.E.s would suffice) next time. I’d post them myself if it were at all possible on Crikey but it is not possible to upload .png files (or anything else)

iii Take a look at the Paleocene/Eocene Thermal Maximum

iv Arctic ice area for the last 60 years. (about half of what it once was)

Richard B
Reply to  kyle Hargraves

The rate isn’t unprecedented Kyle. There were a couple of meteorite strikes and volcanic events that caused approximately equivalent rates of climate change.

Yes, they were accompanied by 90% reduction in global biomass and biodiversity….

kyle Hargraves
Reply to  Richard B

I appreciate the comment Richard but do take a peek at one of my references in
my initial post : viz. the Paleocene/Eocene Thermal Maximum.

THAT event tops the list!. Various volcanic eruptions had nowhere near the same effect. A close second was the events at the end of the Cretaceous. However we need to consider the origin. By ‘unprecedented’, not wishing to become unnecessarily pedantic, the implication that the current events are species or fauna-induced is not unreasonable. In other words, the rate of change is unprecedented given that the cause is clearly homo-sapien induced.

Just so Roger doesn’t feel left out or ignored my reply to his most recent post set off the Crikey filters. Perhaps the reply, refuting Roger, (about non-isolated systems) was a tad mathematical.

Noted forensic meteorologist and widely (self) acclaimed climate scientist Android Blot hasthat there is no drought in Oz.
Using the BoM stats. he picked the cherries so hard that only the stones remain and proved conclusively, to his own immense satisfaction – and won’t shut up about it, that there is nothing to worry about.
From the rain events on that event map, it seems that the Pilbarra & west Qld would be the ideal place to settle for the next few decades.
Pity about all that iron ore & coal others seem to demand.

Just where is this august piece of research of Bolt’s to be located for review? I have the premonition that two hours of dissection ought to be more than sufficient to hang Bolt and Jones and Abbott and I would be appreciative of the role as hangman.

I have come across his drivel in regard to El Nino and 10 year intervals in respect to ocean and land temperatures. His assessments make alchemy appear respectable. However long a creationist raves three or four questions are sufficient (and typically one or two suffice) to dispatch him. I can’t see Bolt being at all different.

Re your premonition – 2 minutes would suffice.
He has displayed his concussive.. sorry, collusive.. err.. conclusive findings on his TV show on Sky with the other Creatures after Dark.
He also referred to its brilliance every day last week when chatting with his Hobbsean (“nasty, brutish & short”) mate the Poison Dwarf on HateRadio – available, for forensic purposes inexplicably, to download.

perhaps you intend the adjective concussive [findings] after all.

I’ve had a look about the net and I can’t find anything that he has said that would terminate him. The stuff that I have mentioned he could mea cupa and side-step. The problem is that the well intended reporters corrupt what what he has written. Rather than quote it they try to analyse it. I yearn for a written piece or an authoritative tape or transcript.

Thanks D.B.; that is the general idea. Regarding my post ( 27 Sept. 201 22:42) I almost used the term ‘derivative’ instead of ‘rate of change’. For those that are able to recall their basic Yr12 calculus it is about dy/dt => unprecedented positive increase.

Richard B
Reply to  Dog's Breakfast

kyle Hargraves
Reply to  Richard B

Large value kurtosis is evident for some data germane to the topic but not all.
In any event whether the data possesses kurtosis (or otherwise) isn’t really the point.