Doctors have raised troubling concerns about the rare instance of three young girls in long-term detention.

Three small girls living in a heavily guarded unit within the grounds of a Melbourne detention centre are showing signs of mental distress. The girls are aged three years, 14 months and six months. All have been there for six months and senior medical professionals have raised concerns about all three.

As well as Huyen and her daughter, there are two young sisters from Biloela, Queensland, who the Department of Home Affairs attempted to deport to Sri Lanka. Dharuniga and Kopiga with parents Priya and Nadesalingam were removed from their family home in a pre-dawn raid in March. 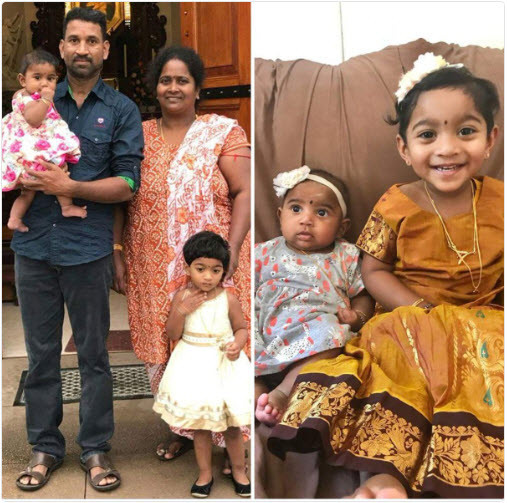 In a medical report supplied to Crikey based on a visit in August, the clinician notes that three-year-old “[Kopiga] is showing behavioural disturbance, disorganised play and attachment since her time in detention …

“Parents report [she] bites her own hands, frequently.”

The younger sister who is 14 months old “is also showing behavioural disturbance and disorganised play since her time in detention, which is now of a prolonged duration.

“The family have been very isolated in detention, and the conditions described are not appropriate for young children, particularly the lack of contact with other children, and restrictions on their freedom of movement. No playgroup or early childhood learning in place”.

The doctor also notes that “we were not aware that there were any long-term detained children in Melbourne prior to the referral”.

The medical report on the sisters is now the second document written by a medical professional in the last three months raising concerns about the welfare of children housed at Melbourne Immigration Transit Accommodation.

A psychiatric report on Huyen and her baby daughter by Professor Louise Newman of the University of Melbourne and supplied to the department in July was reported on in Crikey earlier this month. That report outlined Huyen’s significant depression and that at five months old, her baby was displaying symptoms of anxiety.

Since I began writing about Huyen and her daughter, the DHA has responded once to questions submitted and that was to state Huyen’s baby was “housed” rather than detained.

While it is not appropriate to comment on the specifics of individual cases, the department can confirm that this individual is not being detained at MITA [Melbourne Immigration Transit Accomodation]. This individual is being housed, with her child, in an alternative place of detention (APOD).

There are many similarities between the Biloela family’s account of how they are treated in MITA and Huyen’s. Both families say that beyond occasionally seeing a nurse from International Health and Medical Services (IHMS) there are none of the educational or welfare provisions for their children in MITA as described by DHA.

The families have Serco guards in their units 24/7, who Huyen says make note of everything she does but have been instructed not to interact or assist with her baby.

Huyen stays that one guard often cries during their shift in her unit and multiple guards have told her to talk to the media.

Despite living in the same compound, Huyen said she wasn’t allowed to socialise with the Biloela family and their children until after the first story was published in Crikey. Now she is occasionally allowed to see them in a small, fenced playground area.

After citing the medical report on the sisters who are kept in the same area of MITA as Huyen and her baby, Crikey submitted the following questions to Dutton’s office and the DHA media team last Thursday.

1. Could the minister or his advisors please advise exactly what the range of welfare, care and support arrangements are in place for these three children beyond access to IHMS?

2. Could the minister or his advisors please describe what the health, educational, recreational and cultural services that are delivered to these children beyond access to IHMS?

3. Huyen has said guards who are consistently monitoring her 24/7 are not permitted to assist with her child’s care and that she receives no other support. Professor Newman who prepared the report on Huyen and her daughter (submitted to the minister) says that the guards not interacting with the baby will be very confusing and distressing for the infant.

Could the minister explain why the staff do not assist or interact with the baby?

4. Given that there are now three small children in the APOD unit within MITA, would the minister see the provision of or transport to an early learning centre or playgroup as being appropriate and part of the department’s duty of care?