A Grattan Institute report finally provides some hard data on the extent to which special interests interfere in public policy via donations and lobbying.

The Grattan Institute’s Who’s in the room? Access and influence in Australian politics is groundbreaking work: a study that uses hard data to explore the disturbing extent to which special interests gain access to and influence within our political system at state and federal level. The report, by Danielle Wood and Kate Griffiths, goes to the heart of the lack of voter trust in our political system and why that lack of trust is justified by the ability of special interests to push for self-interested outcomes.

Most important is the hard work Wood and Griffiths have done tracking the role played by highly regulated industries in trying to influence outcomes via political donations and access to ministers. Their data demonstrates what intuitively makes sense but which has never been clearly detailed before: those industries that have the most to gain from influencing political decisions are the busiest at trying to influence politicians.

Highly regulated industries such as property development, transport, mining, energy, gambling, defence, financial services, telecommunications and media have more lobbyists, donate more to political parties and have far more meetings with politicians than industries with lower levels of regulation. About 45% of companies represented by Commonwealth-registered lobbyists are in highly related industries — bearing in mind, of course, that the Commonwealth lobbyist register fails to capture the majority of lobbyists, who work in-house for large companies.

Highly regulated industries also dominate donations. At the Commonwealth level, nearly 40% of declared donations come from highly regulated industries, and around 20% from unions, with the remainder distributed among individuals and other sources. Political donations are also top heavy, with more than half of all donations at the Commonwealth level in 2015-16 and 2016-17 coming from just 5% of donors.

In Queensland, donations are dominated by highly regulated industries like property development, mining and gambling. But because Queensland, unlike the Commonwealth, publishes meeting diaries of ministers, another metric is also available there: more than 40% of ministerial meetings are with highly regulated industries, and 80% of all lobbying contacts, while low-regulation industries like manufacturing and retailing have much less contact despite playing similarly large economic roles. 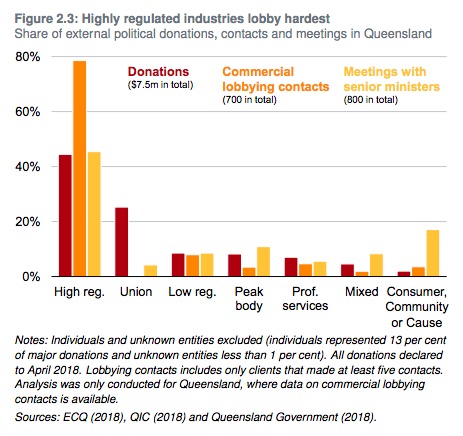 The report also examines the growing role former politicians play as lobbyists, with the Commonwealth lobbyist register showing former ministers, MPs and senators reached a record level of nearly 40% of registered lobbyists in 2017. Since the 1990s, a quarter of federal ministers or assistant ministers took roles with industry in their post-political careers.

And it offers a case study of the way that Indian giant Adani has gone about cultivating politicians for its Carmichael coal mining project.

Mining company Adani has been particularly active in using lobbyists with the right connections. Adani hired former Queensland ALP State Secretary Cameron Milner to lead its lobbying of the Queensland ALP Government. Between 2015 and 2017, Milner’s lobbying firm made 33 contacts with government officials, more than any other firm on behalf of any other client. Six out of ten of the Premier’s personal meetings with lobbyists were with Adani’s lobbyists, and at least three of these included Milner. Adani has also been lobbying federal politicians through a firm with powerful connections on both sides of politics. The firm is led by former Queensland ALP Treasurer Damien Power and former Queensland Nationals Premier Rob Borbidge.

The report also charts the tendency of donations to rise and fall with the level of political interest in a particular industry, with the gambling, hospitality, salary packaging, mining and alcohol industries also rising and falling around moments of political contention in relation to regulation.

What to do? The report urges an agenda of dramatically greater transparency around both donations and ministerial meeting diaries, the establishment of a federal anti-corruption body, and the capping of political advertising expenditure to reduce the reliance of parties on donations and contributions from special interests like unions.

Perhaps best of all, the report actually moves the debate over transparency and influence in politics in a new direction and gives the media and accountability advocates new tools to pursue the elimination of the favoured role of special interests in politics — and begin restoring voters’ sense that politics is working for them, as it’s supposed to, rather than those who can buy influence.

What do you make of this new report? Email [email protected] and let us know.

It looks to me as if the Unions aren’t getting value for money.

Oh yes, but tell us how bad the unions are again, Murdoch.

The book “Game of Mates” spells it all out pretty clearly.

Surely it is time to ban lobbying completely. After all it is supposed to be representative government – i.e. members are there to represent the interests of voters in their electorates, not those with tons of money and influence. We could have elections publicly funded and a complete ban on TV advertising.

It may be a pipe dream, but it would solve a host of problems. I thought that the government represented people?

The role of lobbyists in some European countries is actually an anathema. If the government is to (say) purchase goods or services, then it is assumed that the government department responsible for the purchase will assess the offers based against the requirements and offer (cost), and make a decision. The idea that lobbyists can sway that decision, or alternatively change what the government says it wants, is looked at with askance. Same goes for advertising. Why do Australian airports have large posters of military aircraft, ships, etc. – who are they trying to influence, and how?