Please enjoy the quiet, bone-dry irony of these Soviet-era jokes.

This week, a list of Soviet jokes, recorded by the CIA during the 1980s, were declassified. These zingers were shared among Soviets of the time, although why a list of them was prepared for the deputy director of the CIA isn’t 100% clear. One possibility is for their value as tools of dissent (it’s worth remembering, people could be, and were, sent to prison for jokes under Soviet rule). 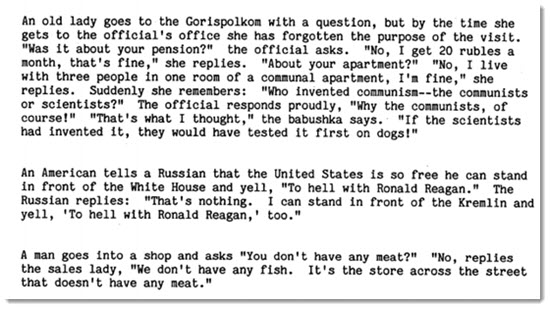 “Jokes against the party constitute agitation against the party,” Matvei Shkiriatov apparently said at a central committee meeting in January 1933. At the same time, the sublime absurdities of living under communist dictatorships almost demanded a humorous response. As Ben Lewis, who wrote a book on the subject puts it: “The communist joke was by nature deadpan and absurdist — because it was born of an absurd system which created a yawning gap between everyday experience and propaganda.”

So if, like us, you like your jokes laced with a bone-dry Slavic irony, please enjoy a couple of our favourites:

A train bearing Lenin, Stalin, Khrushchev, Brezhnev and Gorbachev stops suddenly when the tracks run out. Each leader applies his own, unique solution. Lenin gathers workers and peasants from miles around and exhorts them to build more track. Stalin shoots the train crew when the train stops. Khrushchev rehabilitates the dead crew and orders the tracks behind the train ripped up and relaid in front. Brezhnev pulls down the curtains, pretending the train is moving. And Gorbachev calls a rally in front of the locomotive, where he leads a chant: “No tracks! No tracks! No tracks!”

The best joke is that one of the “Related Articles” is a 4 year old piece about Taylor Swift. Who knew Taylor was a communist?

A Soviet citizen rings orders a car and is told it will be delivered in five years. He asks “Morning or afternoon”, the supplier asks what difference does it make, it’s five years from now?

“It’s just that the plumber is coming that morning”

The only non obscene one I ever had a Russian tell me was re the economy – “We pretend to work and they pretend to pay us”.
Fifty years on that is a bit ominous in a country with stagnant or declining wages, no prospect of home ownership until the oldies die – if then – and a political system that doesn’t give a flying.