Who is working the Ken Wyatt ‘defection’ stories?

We’re not sure about Sarah Hanson-Young’s new book title, Mamamia‘s co-founder stops just short of claiming to be the first actual website, and just who’s going after Ken Wyatt? From the Crikey grapevine, it’s the latest tips and rumours …

Wyatt’s going on here? So, is Ken Wyatt a would-be defector to Labor? The AFR‘s Joe Aston broke that yarn yesterday, earning denials from both Wyatt and his alleged interlocutor, NSW Labor MP Linda Burney. “At no stage would I contemplate swapping from a Coalition party, the Liberal Party. I would not cross over for any political expediency or for personal gain or benefit,” Wyatt said. Burney described it as a “flight of fancy”. Aston — who broke the Stokes-Murdoch role in Malcolm Turnbull’s ouster — doubled down today and insists defection talks happened. Which leads us to wonder about who benefits from spreading the claim — false, true or somewhere in between — that Wyatt was considering crossing the floor in a permanent capacity?

It wouldn’t have anything to do with Wyatt’s forthright declaration during Muppet Show Week that if Peter Dutton became leader, he would “consider his position“? A view that Wyatt took because Dutton had — something unknown to Wyatt until later — boycotted the Stolen Generations apology in 2008? And then there was his decidedly underwhelmed reaction to Tony Abbott’s role as Indigenous affairs “envoy”. In a party that has so many civil wars going on it’s ready for a Ken Burns documentary, maybe right-wing forces have decided it’s time for some revenge on the West Australian?

Treasure Trobe. Ms Tips loves a wacky uni ad campaign and La Trobe has excelled with this one. “Make it your first choice”. First choice for what? The zombie apocalypse? 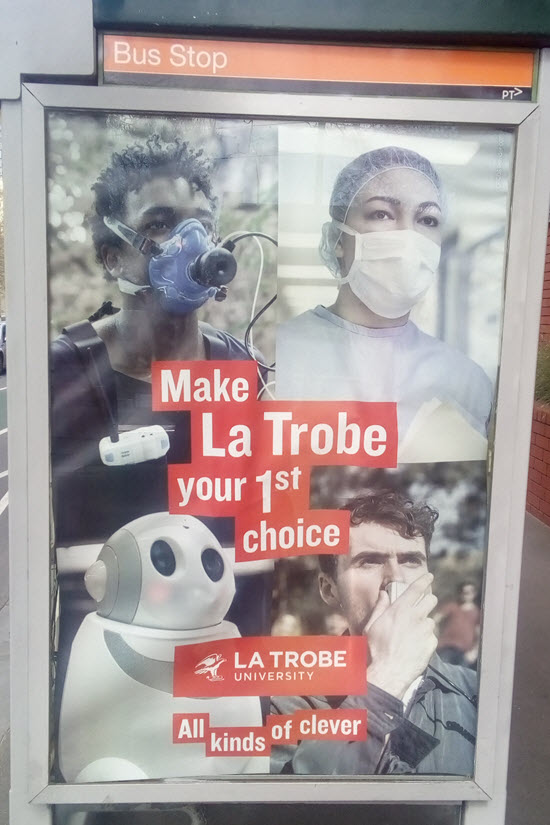 Bold is the word. Leaving aside the claim they basically invented woman-oriented lifestyle websites, let’s look at that insane podcasts claim: I mean, if we’re being generous and ignoring the full decade of podcasting development, the ABC’s 2010 Digital Living podcast, there’s the fact Gimlet Media — the, uh, well, media podcasting company — was founded in August 2014, months before Freedman’s first podcast was released and nearly a year before the Mamamia podcast network was launched. Taking credit for things you didn’t do? That’s not like you, Mamamia.

Don’t be SHY. Sarah Hanson-Young has added to MUP’s On series of short books/long essays — On Doubt, On Rape, On Disruption etc — chronicling the “abuse and slut-shaming” she and many others have been subjected to by male parliamentarians. The choice of title is … well … we’ll let you decide. 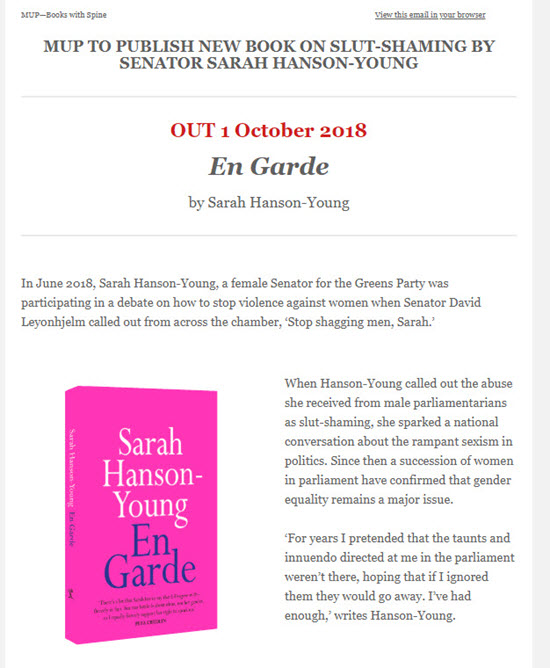 Planning Succession? Over at the Foxtel forums, a debate is brewing about when the Showcase channel — which boasts that it’s “the home of HBO express from the US” — will finally air the well-received HBO show Succession. The show is a drama helmed by Jesse Armstrong, who’s had a hand in some of the greatest comedies of the past 15 years, such as Four Lions, Peep Show and The Thick Of It. Succession is about the “the Roy family – Logan Roy and his four children – who control one of the biggest media and entertainment conglomerates in the world … [which] tracks their lives as they contemplate what the future will hold for them once their aging father begins to step back from the company.” We can’t think for a moment why Foxtel wouldn’t rush to air such a relatable show? We asked when it was premiering, and what might be causing the delay, Foxtel confirmed they definitely were going to air the drama, they just didn’t know when and couldn’t provide any further information.

Re: Mamamia. Politically we might be living in the post-truth era, but advertising has always lived there.

Forget Gimlet, twit.tv have been doing podcasts since 2005, and they probably weren’t the first either.