From Eddie McGuire to a "feral" fan base, Collingwood is a spectre that haunts the Australian football imagination. But there's more to this hatred than it may seem.

Sonny Liston once said, “A prizefight is like a cowboy movie. There has to be a good guy and a bad guy. People pay money to see me lose. Only in my cowboy movie, the bad guy always wins”. Collingwood is the AFL equivalent of Liston, destined to always play the bad guy in the theatre of football. But how did Collingwood end up being the most reviled (and, by its fans, the most intensely loved) football club in the land?

There are several common explanations: Eddie McGuire’s ham-fisted and offensive media forays, the club’s “feral” fan base, and events like the infamous Nicky Winmar incident at Victoria Park. But to each of these charges, Collingwood is hardly unique.

When a psychotherapist wants to understand a patient, they ask them to talk about their childhood so they can understand the root cause of their problems. Collingwood’s infancy seems as apt a place to start as any other in understanding the Collingwood Football Club. Whether through this process we understand more about the pathological hatred of Collingwood by others is another matter.

In 1859 — 32 years before the Labor Party was formed under a gum tree in Barcaldine — a radical stonemason and Chartist, Charles Jardine Don, won the seat of Collingwood in the Victorian Legislative Assembly. Don was the first of his class represented not only in Australia but “in any legislature in the British Empire”.

That he should win a seat in Collingwood is no surprise; a suburb then as infamous as the football club it would seed. Collingwood was seen as a slum, a pariah suburb, a miasmic dystopia of Dickensian proportions.

In 1850, Collingwood was a sparsely inhabited flat, sitting in a gully between Fitzroy and Kew. Originally occupied by the Wurundjeri people, the area was declared a municipality in 1855 and swelled to a population of 9000, as those fleeing the goldfields and other economic unfortunates began crowding in. With no building regulations, shanty houses were erected cheek by jowl to accommodate the flood. Industry followed to exploit the pool of cheap labour, setting up Melbourne’s noxious industries, including the boot trade, making Collingwood a hot-bed of political protectionism.

Reviled by its neighbours — Fitzroy council refused meat from Collingwood abattoirs — from the beginning, the economic, political and social realities of Collingwood became manifest in the character of the football club.

When a meeting was held on February 12, 1892, to establish the club, the recently elected firebrand, John Hancock — organiser of the Collingwood boot-workers — almost brought the roof off when he suggested “the very name of Collingwood would strike terror into the hearts of opposing players”.

To The Age, Hancock was a trenchant class warrior. The people of Collingwood agreed, putting Collingwood on a collision course with respectable and conservative opinion.

The club would go on to play host to many reviled and colourful patrons. The most notorious was Melbourne “businessman” John Wren; a figure of great heft, his photograph hung anonymously in the Collingwood Social Club for decades. Besides his aid to the betting industry, Wren was accused of introducing professionalism to sport — back then, a term of abuse from conservative quarters — by offering decent match payments.

The question of financial compensation for workers playing football was not inconsequential. With no welfare state, a physical injury to a manual worker could be disastrous. The very question of professionalism led to the VFL competition, which broke away from the VFA in 1897.

For conservatives in the late 19th century, sport was a dry-run for war. When a program of boyhood conscription (i.e. compulsory military drills for boys) was introduced in 1911, it ran headlong into the far weightier cultural phenomenon of football. Many rueful media observers of the day noted the lack of patriotic zeal amongst the youth, labelling it “the football tyranny”. 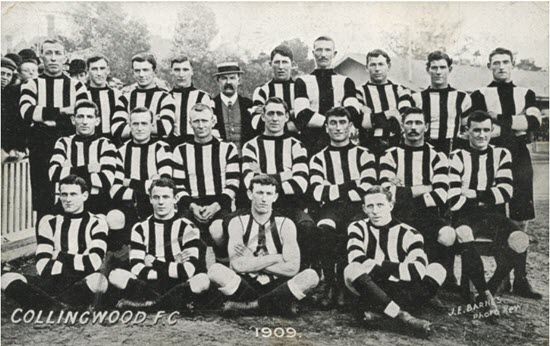 The media went into apoplexy, the government produced propaganda posters for bollards around Melbourne, and before the 1916 season began, five of the clubs withdrew, leaving only Collingwood, Richmond, Fitzroy and Carlton to contest the season amongst themselves. Collingwood Secretary EW Copeland argued for continuation; arguing football was “the workingman’s relaxation”, while Collingwood President, Jim Sharp, defended it as “a poor man’s sport”.

Later that year Billy Hughes pushed for conscription and lost the referendum. While the “no” vote narrowly won with 51.88% in 1916, in the seat of Yarra the “no” vote was 70.19%. But the campaign of recruitment continued, with drill sergeants turning up to VFL games to spruik for enlistment, leading to several noisy confrontations with crowds at Victoria Park and the Lakeside Oval.

Envy of the league

Political truculence explains some of the historical animosity toward Collingwood. The other half is owed to envy. Collingwood notably took control of Victoria Park and boosted revenue; created the first players’ provident fund; became the first club to obtain a liquor licence (a task necessitating a deep foray into and understanding of the world of local Labor politics); and of course won a fair swag of premiership cups. The club’s raucous supporters have since fanned out into the outer suburbs, and can be found under every shrub and around every corner.

The modernisation of the club began with Frank Galbally, but the job of modernisation can never be complete at Collingwood. Its history and symbolism runs too deep. The truculent, proletarian origins can never be forgotten and that’s what really rubs people up the wrong way — to be handed defeat from the wretched of the earth. Go Pies!

Do you think Collingwood deserves the label of “most hated team in the AFL”? Write to [email protected].

A fascinating piece, David. Quite a few similarities with Port Adelaide (the South Australian version of Magpies) ie: workingman’s suburb, wrong side of the tracks, fierce community support, success at winning premierships etc. How I yearn to be back at Alberton Oval in the golden era prior to Port Power.

What are the chances of a federal government trying to shame the current AFL players into joining a dumb war? Buckley’s & none….and that’s no reference to Nathan Buckley.

Bloody good stuff David L. There was quite a bit in that article that I didn’t know.
And I used to live in Collingwood.
Still hope the bastards lose tomorrow though. 🙂

I just loath AFL it constant interruption of of intelligent conversation in the AFL states it is all they can talk about I,m not sure if its because the denizens therein said state are utterly stupid,just dont know any better brainwashed or dumb

You clearly don’t understand the role of leveller it plays in social interaction in the Aussie Rules States. Not everyone wants an academic discussion with everyone else all the time.

This account overlooks the sectarian divide in days of yore. Collingwood hatred was protestant dominated suburbs reviling catholics by accounts I have read over the years. I guess the labels working class and Irish catholic had considerable overlap.

I am glad you gave us the broad sweep. Yes Collingwood was reviled before Eddie. He’s just another modern distraction – but not irrelevant to the topic at all. Yes – there’s a hate-love thing going on. I think if Melbourne footy fans didnt have a Collingwood to hate then they might have to invent one. I’m a Footscray fan – but I’m happy to support the Pies when they’re in the finals and we’re not. You’re allowed a no#2 club down here I believe. I’m told it’s a long-standing tradition.