The government can shout about strong jobs growth, but it completely ignores that underemployment among women has remained high for decades.

Australia’s new treasurer is getting a pretty easy start. Josh Frydenberg MP had been in the treasurer’s office just a couple of weeks when the new labour force numbers came out. The top line looked good.

Unemployment was at 5.3%, equal to its lowest level since 2012. Meanwhile, people keep streaming into the labour force — the number of willing workers rose by 26,000 (in trend terms) in the month. Such an influx of job-hunters would have caused a big bump in the unemployment rate if the economy was not creating new jobs. But it did create them. 29,000 more people had a job in August than in July (all this is ABS trend data, which is slightly different to seasonally adjusted data).

Australia’s economy has even shed its bent for making people work part-time. In August, 20,000 of the 29,000 new jobs were full-time positions.

This is a relief. We went through a very ugly period back in 2016 where the economy was adding part time jobs while shedding full time jobs. That was a dire time, where it seemed full uberisation of labour had arrived and capitalism was eating itself faster than even Helen Razer could have imagined.

It has now been 24 months since the last recorded period when the country added part-time jobs while losing full time jobs (in trend terms). The aggregates all look pretty decent. Frydenberg must be pleased. But dive into the details, and you find more nuance in the story.

Women are not getting too much out of this slow-motion recovery. This is not new.

When Frydenberg moved into the treasurer’s office he accepted a title held by 39 men before him. Six Williams, four Johns, two Roberts, two Josephs, a Harold and a Gough. Sundry others. These men have presided over an economy where men tend to occupy higher positions than women and earn more money than women, and an economy where women tend to find it harder to get work.

Unemployment for men tends to fall to much lower lows in the good times. It also hits higher highs in the bad times. But that’s not so much because women keep their jobs when the economy sours. Instead, it is because they tend to stop looking for work altogether when jobs dry up. So they drop out of the labour force and are not counted in the unemployment statistics.

Keen observers of labour force issues will know the big problem in employment in Australia today is not so much unemployment as underemployment — defined as workers wanting more hours. It became a big issue in the most recent slow-down, as casualization and the gig economy eroded the 40 hour week dramatically, leaving many workers without enough hours to make ends meet.

Female underemployment has been higher than male in bad times and good.

Female underemployment is higher than male in proportional terms — 10.6% of labour force compared 6.25% for men. It is also higher in absolute terms. The raw numbers of women wanting more hours (660,000) is also higher than men (440,00), and has been since records began in 1978. 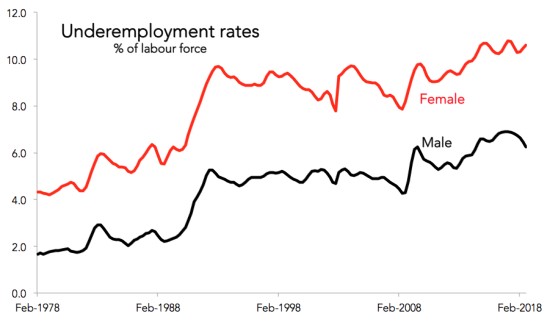 It will be fascinating to see if anyone will declare victory in the war against casualisation while female underemployment is still elevated. Frydenberg in particular should refrain from making such a claim. The new treasurer should instead work far harder to make sure the economy creates opportunities for all of us.

Oooh I’m squeezing…give me a minute Arrrrr any second now oooooh that hurts….here it come, I’m sure it’ll be soon…..wages growth.

Hard to put too much faith in ABS unemployment numbers when we have scams like Internships doing the rounds.

Oi Josh! the greatest area of female underemployment is within your own Liberal Party.

Apparently when John Howard boasted of the party being a Broad Church, he wasn’t using ‘broad’ in the US colloquial manner.

How much of that “great Limited News Party news” is down to state government activity?
And how much has the definitin of “work” been whittled down?
Are we still going to be able to get “casual loans” that we can pay off with our casualised wages?

Lowest U/E since 2012 – in other words, since they came to office.
Meanwhile taxes & national debt & deficit higher than during the distressingly unnatural Labor interregnum.

Yes, & meanwhile wages growth remains at almost half what it was 6-8 years ago.