Good morning, early birds. China fights back against the Trump trade war with tariffs of its own. Plus, Adani wins a 12.5 billion-litre water grab. It's the news you need to know, with Chris Woods.

The Chinese government has retaliated against Donald Trump’s latest shot in the trade war with $60 billion worth of new tariffs, ranging from 5-10% on US goods, to start Monday September 24.

The ABC reports that China’s tariffs will be triggered concurrently with Trump’s $200 billion package against Chinese goods. The US President had earlier warned that any such retaliation would lead to a further US$267 billion worth of tariffs, while China’s commerce ministry said simultaneous countermeasures were necessary to safeguard the country’s interests and the “global free trade order”.

On the local side of things, KPMG research published today in The Australian ($) finds that Trump’s tariffs would cost Australia about $2 billion in the first year and rise to a maximum of about $5 billion by the early 2020s.

NOT WITHOUT MY WATER

The federal government has waived a “water trigger” requirement for a proposed pipeline to extract billions of litres of central Queensland water for Adani’s proposed Carmichael coal mine.

The Sydney Morning Herald reports that the environmental department will only require “preliminary documentation” for the 110-kilometre pipeline, effectively expediting Adani’s plan to take 12.5 billion litres of water a year from central Queensland, however a spokesperson said “stand-alone proposals which involve only associated infrastructure, such as pipelines, are not captured by the water trigger because they do not directly involve the extraction of coal.” The news comes as Adani admits to an “administrative error” ($) following investigations into allegations of illegal bore drilling.

HOW TO SAVE A LIFE

Public health group the Penington Institute will today call for naloxone kits to be made freely available to help prevent the 1100 people who die in Australia annually from opioid overdoses.

The Sydney Morning Herald reports that the death toll from Australia’s opioid epidemic, which arises largely from legal painkillers like oxycodone, morphine and fentanyl, now outstrips the height of heroin. However, the Penington Institute’s CEO John Ryan says naloxone has offered “a silver bullet” for overdoses, and, at a press conference today with Health Minister Greg Hunt, will call for the life-saving drug to be made freely available as a nasal spray, provided to friends and family of opioid users, and distributed through pharmacies, homeless services and prisons.

Re my SMH oped on schools: I owe all teachers an unreserved apology. My main point was to Q whether school as structured serves needs of modern society. Comment about teachers unfair & unwarranted. I benefited from many hardworking + great teachers, as do my daughters. Mea culpa.

The freshly minted Liberal candidate for Wentworth apologises for a suddenly popular Fairfax piece from June, in which he argued that new expectations around resource management mean teachers work “hours closer to three-quarters of a regular full-time job”.

The road not taken: reflections on the global financial crisisWayne Swan

“It’s one of the great ironies of recent history that possibly the biggest beneficiary of the economic policies I led as treasurer during the global financial crisis has been the Coalition. Why? Because Australia’s avoidance of recession gave the Coalition the ability to demonise deficit and debt, and camouflage their smash-and-grab assault on the social safety net. They never had to face the choice that Labor faced in 2008 and 2009 — between deficits or a recession with forecasts of 8.5% unemployment.” 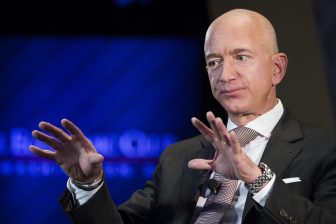 Why the ‘activist CEO’ must have rituals of personal growthHelen Razer

“Consider that the ‘Activist CEO’ believes his job title just as well. Perhaps Cook, who championed marriage rights and human rights even as Congolese children were beaten and enslaved, as Chinese factory workers were lost to misery, believes it. And maybe Jeff Bezos, who declared this week that he would tackle homelessness believes it as well. He believes this inside every one of his five US estates. This CEO of Amazon, a company whose exploitation of actually homeless Scottish workers is known, believes himself to be a champion for the everyday worker, she who passes out from heat inside an Amazon warehouse.”

“Apparently there was no one there a decade or so ago when one of the 12 Apostles rock formations suddenly cracked, broke and collapsed into the sea. Imagine if you had been. You would not have believed your eyes, for a moment or two. Then, when you were convinced it was real, you would have been struck by the enigma of occurrence — something remains in a steady state for decades, and then there is ‘the event’, and the before and after of it are radically different. There was a rock standing tall, then there was not. Weird.”

Bill Shorten to announce $400 million pitch to women on superannuation

What did Rupert Murdoch and Kerry Stokes have to do with the Liberal leadership spill?

If I were a Test cricketer: Koori carpenter Brendan Doggett’s rise ($)

Trade war will rage after Trump is gone ($) — Greg Sheridan (The Australian): “This US-China trade conflict has been brewing for a long time and it is not going away, even if Trump is a one-term president. For if Trump is beaten in two years by a left-wing populist Democrat, the successful challenger is not going to surf into the White House on the basis of a campaign, waged across the battleground states of the mid-west, for free trade with China.”

‘I’m not going to be silent’: plea to rethink care royal commission — Adele Ferguson (Sydney Morning Herald): “A key problem is the sector is regulated by the states, which have done a poor job of it. There’s no ombudsman, no mandatory accreditation system and no regulatory oversight of village finances or changes in operators. Nor is there any regulation of exit fees, which can be as high as 40 per cent of the sale price when a resident leaves. In 2007 a federal parliamentary inquiry recommended the Commonwealth step in and regulate the sector. Nothing happened.”

Five wasted years — Daniel James (IndigenousX): “The area that has continued to be the most challenging for governments of all persuasions is that of Indigenous affairs. Spanning the scope of education, health, housing, justice, employment, land management constitutional reform and national identity. The lack of policy ambition and commitment to change by the successive regimes is resulting in stagnated outcomes.”