Clive Palmer’s Facebook is once again vomiting out anti-Semitic and racist imagery, Bill Shorten tries to summon a storm and things get spicy at the Senate Inquiry into the Great Barrier Reef Foundation board. From the Crikey grapevine, it’s the latest tips and rumours …

More Palmer Nazi stuff? Clive Palmer has learnt the hard way that nothing stays harmless online for long — after attempting to launder his image with “dank memes”–  deliberately crap photoshop jobs and amusing gibberish like “grog dog” — he’s had a long battle with gross alt-right elements in his “Palmy Army”. And for a while it seemed everything had calmed down — asking “Tim Tam wedding cake, yes or no?” seems unlikely to ruffle too many feathers. Which makes it all the more surprising and disturbing that nonsense like the following cartoon still makes its way onto his page: 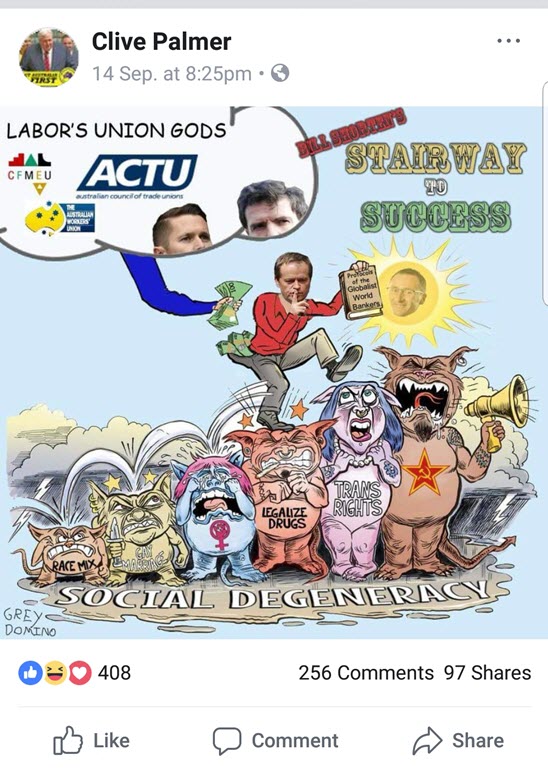 Cribbed from right wing loon and “rogue” cartoonist Ben Garrison, it shows Labor leader Bill Shorten climbing his “stairway to success” — Shorten skips up on the heads of a group of monsters collectively dubbed “social degeneracy” and individually referred to by names like “race mix”, “gay marriage” and “trans rights”, his back pockets stuffed with money from his “union gods”, a book labeled (oh, Christ) “Protocols of the globalist world bankers” in his hand.

Over his shoulder, Richard Di Natale’s beatific countenance glows out from the sun. To the extent it makes any sense at all, it makes several troubling references to Nazi theories about the decadence of western society and global financial conspiracies. We asked Palmer if he approves the memes that are posted to his Facebook page, if he believes that “race mixing”, marriage equality and trans rights are steps towards “social degeneracy”, whether he believes the Labor party are in the thrall of “globalist word bankers” — and, while we’re at it, who that phrase refers to — but he didn’t get back to us before deadline. Hopefully we won’t be seeing more of this kind of imagery as he splashes large sums of money trying to make a political comeback at the next election.

Not mint to be. Yet more evidence has emerged of how outsourced agency services put client privacy at risk. A tipster tells us that databases of the Perth Mint have been hacked and personal bank details of customers stolen. “The first letter advised the hacker only had some data, the second letter advised you’d better check your information details and makes sure your bank knows,” the tipster told us.

Ms Tips contacted the mint and they directed us to a statement confirming the hack was of a “third-party technology provider” and denying there was any evidence to suggest the Perth Mint’s own internal systems “have been compromised in any way”. This follows high profile hacks of third party service providers for Ticketmaster, Supa IGA, a series of government departments’ HR system.

Conflict of interest? Never heard of him. There was widespread shock when the Great Barrier Reef Foundation — an organisation stuffed to the gills with pro-coal and big-business board members — received a $444 million grant from the federal government earlier this year with no tender process or open consultation. Apparently, not least from the foundation itself.

Chairman Dr John Schubert told today’s Senate inquiry he “didn’t know” why he was summoned to the meeting with Turnbull and Frydenberg (and notably no public servants) earlier this year. In the meeting, Turnbull apparently didn’t explain why the GBRF had been chosen to receive the grant.

“In general terms, he indicated the reasons why the foundation was chosen, but not specifically and not in detail”, Schubert said.

Labor Senator Kristina Keneally also raised concerns about links between the GBRF’s board and the fossil fuel industry. For one example, board member Grant King — also president of the Business Council of Australia, former managing director of Origin Energy, and pro-coal op-ed writer — was asked whether people might see a troubling inconsistency between his advocacy for big mining projects and protecting the reef.

“I don’t see that inconsistency,” he said, out loud, to people.

Frydenberg’s incomplete media blitz. Having got his feet under the desk, newbie Treasurer Josh Frydenberg last week launched a media blitz, with interviews across several media outlets. Ms Tips was taken with one observation Frydenberg made a couple of times in different interviews: he was very careful to distinguish between ASIC and its “current leadership” — the government appointed James Shipton at the start of the year. That is, he seemed to suggest, that the problems of ASIC are all to do with Shipton’s predecessor Greg Medcraft, who was appointed by Labor.

As Fairfax journalists pointed out, and The Oz, signally, did not, it was the Coalition that slashed ASIC’s budget in 2014. But it’s funny that the government now thinks ASIC under Medcraft was so awful. In 2016, Scott Morrison claimed, about financial services, that “we have a tough cop on the beat in that area — it is called ASIC”. Indeed, back then Morrison didn’t think there was any need for a royal commission into the banks because “ASIC has the powers of a royal commission and in fact it has greater powers than a royal commission”.

Still, maybe James Shipton really has become the tough cop on the beat? Well, Shipton’s the one who in April declared that financial regulation had to be essentially self-regulatory, although they “stand ready to deploy all the regulatory and enforcement tools available to us”. “Stand ready” — that’ll terrify them.

Falling shorten? Football finals season is now in full-swing. With it, comes another quaint September ritual, where pollies of all stripes scurry off to proudly jump on a bandwagon in an attempt to appear that little bit more normal to the everyday punter. Yesterday, Bill Shorten (a proud Melburnian, it should be noted), threw his weight behind the Melbourne Storm — a safe choice given TAB has them at $2.65 to win another premiership.

Donning a purple scarf, Shorten promised $1.1 million worth of federal funding towards a new home for rugby league in Victoria. He also managed to sneak in a bit of cheeky, highly-scripted banter, telling Storm captain Cameron Smith “you’ve had your finals, mine’s not till May of next year”.

But despite a decade of success, the Storm have done little to endear themselves to a city of AFL loyalists, much to the chagrin of many in league’s heartland. Shorten himself put it best, describing the Storm as “perhaps not as well-known as they should be amongst Victorians”.

So while Shorten may have allied himself with a premiership winner in the Storm, he may not have found a vote winner.

Reckon Clive takes off his shoes and sox – before he sticks his feet in his mouth?

…. And “Stormy” Shorten – now there’s “relevance” (in their own town) metaphor?

With a bit more practice we will all be experts at being able to interpret cartoons correctly and in the public interest. Seems (according to the article) that the is something in the cartoon for everyone; even Nazis. Commies apparently miss out. In the place “Labor’s Union Gods” I would have had Michelangelo’s “God and Adam” – but be that as it may.

Those that like Clive and pray for a second coming will vote for him. End of story!

Uncle Cliev’s centrist stuff was brilliant, and for a time, worked electorally. I just can’t see him making a splash aiming to be the new ALA. Even the PHON idiots are smarter than this. It seems so damn desperate. At least when the next election happens we’ll get another data point demonstrating that this crap isn’t actually popular.