Welcome to Side View — a curated guide to new and overlooked content on politics, policy, and public affairs. This week: the next prestige TV crime drama, our surging prison population and a Walken-esque ... pause.

Elle MacPherson once commented that she never read anything she hadn’t written herself. Scott Morrison is far more expansive — he doesn’t read anything not written in Australia. “I don’t read international fiction. I just don’t relate to it. I’m interested in our stories.” And fair enough too. Meanwhile … Lindy Morrison (no relation we know of) on Brisbane — and Canberra — in the late ’70s. Anne Kellas has a melancholy piece on memory and the present in Hobart and Danielle Scrimshaw on the silence about LGBTI Australians in our history.

ANYONE ELSE WANNA DROP OUT?

Behold the dramatis personae of Facebook’s war on publishing before contemplating Silicon Valley’s latest attempt at ideological self-justification: win-winism. And then there’s Google’s secret, dirty deal with Mastercard for your information. Sigh. Almost makes you think about Christopher Walken’s solution to the problem of Silicon Valley (some View To A Kill trivia: production was held up after Roger Moore accidentally shaved his eyebrow off and couldn’t act for six weeks). Or on a more positive note: the detail of NFL player’s Chris Long’s commitment to genuinely effective philanthropy is impressive (and interesting how education is the philanthropic focus of US athletes, including LeBron James’ staggering level of charitable giving).

For a number of years we’ve been putting more people in jail for longer sentences. That’s led to Australia’s overall imprisonment rate soaring even as crimes rates plunge. The most recent data from the ABS (up to June this year, which is the 2018 figure) shows by how much. 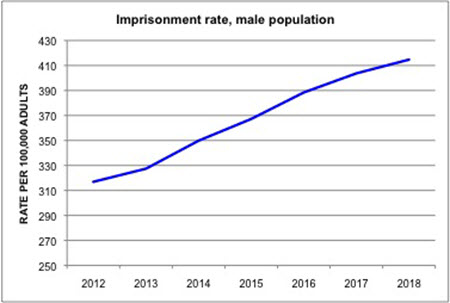 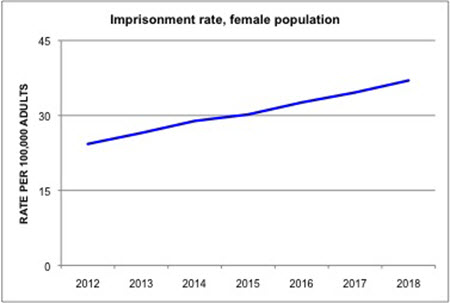 And that applies to our horrific rates of imprisonment for Indigenous men and women as well. 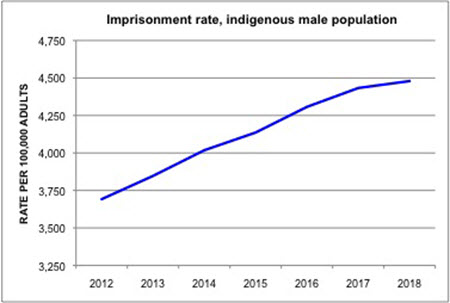 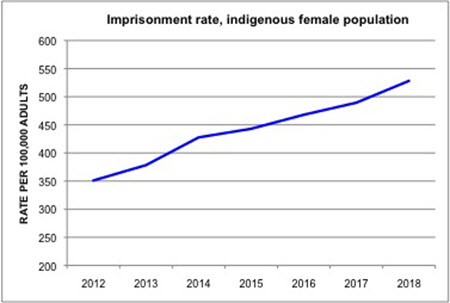 A belated review of In The Long Run We Are All Dead, while a bit iffy on its definition of neoliberalism, articulates Geoff Mann’s insightful, if controversial, thesis about how best to understand Keynes. And is there a deep state operating in the US? A review of books by James Comey, Michael Hayden and James Clapper says no. The truth is worse, and more obvious. And one of America’s pre-eminent philosophers takes on Trump-induced fear — though not well enough for this reviewer (but hey there’s always dread).

Mexico’s traditional social banditry involving fuel theft has been transformed into a crime cartel mecca that dwarfs drugs, which is lucky because Mexico didn’t have enough problems with crime and corruption. And although the far right didn’t do as well as polls predicted in Sweden’s recent elections, they may yet play kingmaker there. How Sweden mishandled their immigration and refugee debate has plenty of lessons for those who think not talking about things keeps them out of politics. And something to comfort anyone who’s ever queued up at a US airport to be scanned: the TSA is a waste of time and actually increases deaths.

If we could create artificial intelligence sims, what would be our ethical obligations to them? Or is this just a philosophical wank for men who have no idea what it’s like to bear life? The more I learn about dark energy the less I understand it and this first-principles explainer doesn’t help me understand how completely empty space must have energy in it. Plus a follow-up to a piece I featured in an early, funny Side View claiming reality must depend on consciousness. Not so, says a critic. And while we’re discussing the nature of reality, I’ve got plenty of dark bloody energy about this: the lift buttons really aren’t connected.

Also claiming that the TSA is trying to solve a non-problem because airline hijackings are rare. Bwahahaha. Found the millenial author who wasn’t around in the 70s and 80s and was a child for 9/11. No doubt there’s some ineffective or unnecessary airport security going on both in Australia and America, but it’s not a non-problem if the bad guys think it’s an easy mark the way it used to be.

As is commonly the case, there’s an XKCD for this kind of “look how smart I am, I just came up with a simple solution that legions of experts didn’t!” thinking:

and in fact a second and third one for good measure

Agree, though I think the US situation which is way over the top compared to us. Going through their big airports you really feel like a tin can on the baked bean factory line. I certainly don’t feel safer. Fingers crossed I’ll never have to endure that country’s airport security ever again. I think we’ve got a reasonable balance if customer experience is the measure.

I travelled a lot through Boston domestic airport the few years leading to 11sep01. The security was ridiculously bad. They had a single X-ray machine and operator which seemed ridiculously over the top to me back then. So I’d be in the long queue, but they’d wave around the mobs of school kids and other friendly groups to keep the line down. I mentioned my thoughts on this to the sole disinterested security operator. He responded by waving everyone in the queue through and gave me the full monty search. Very amusing, but it was only a few weeks later they paid for their laxness.