We are small nation, but punch well above our weight when it comes to blithe racism.

On Tuesday, these curious times gave us yet another series of words we never thought we’d see in combination, when US comedian Kathy Griffin told Australia’s tallest baby and Adelaide Advertiser columnist Caleb Bond to go fuck himself. 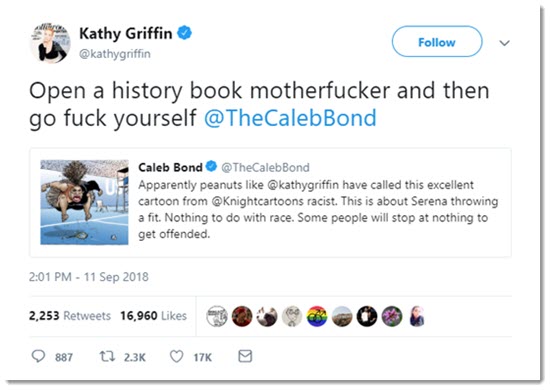 This was in response to a depiction of Serena Williams by Herald Sun cartoonist Mark Knight which drew on the conventions of the ugly history of minstrelsy in this country and elsewhere and reminded us all that while we are small nation, we sure do punch above our weight in blithe racism.

Let’s look at how the world reacted to Knights “art”.

Hong Kong based English-language newspaper The South China Morning Post, ran a piece on the “furore” enveloping Knight — they play it extremely cautious, putting the double qualification of “accusations” of “”‘racism'”.

The Hindustan Times reported the scandal fairly straight, although one perhaps detects their view in their description of what the cartoon contains:

Mark Knight’s caricature, published in Melbourne’s Herald Sun newspaper on Monday, shows a butch and fat-lipped Williams jumping up and down on her broken racquet at the US Open.

The US response was widespread and, as Griffin’s missive indicates, far less equivocal. A host of American celebrities and political figures weighed in including Reverend Jesse Jackson, Martin Luther King Jr’s daughter Bernice, Wanda Sykes, and Ron Perlman among others. It was also reported on CBS, CNN, Vox and The New York Times. 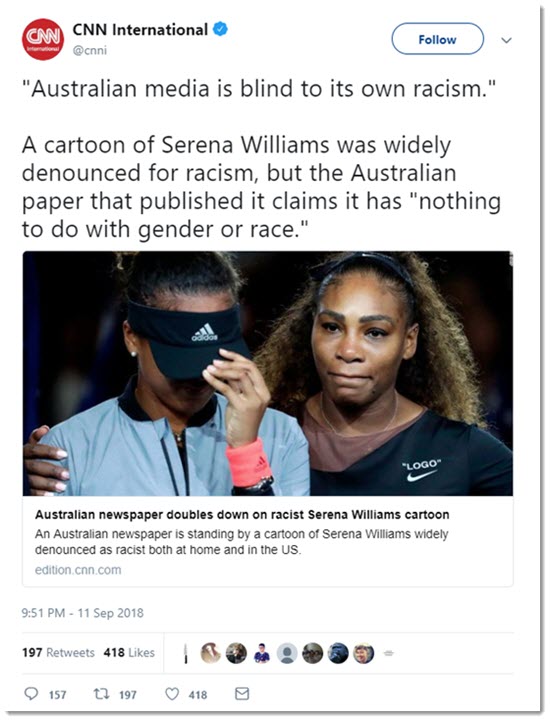 Notably — and unlike papers in the UK and Australia — The Washington Post felt no need to put any quotation marks around the word racist in their headline:

The Post also published a commentary piece on the history of racist caricatures in response. The National Association of Black Journalists called Knight’s work “repugnant on many levels”.

But Crikey’s favourite response out of the US came from outside the mainstream media. Knight may not have expected to come to the attention of hip hop star Nicki Minaj, but this week he walked away with her prestigious “cocksucker of the week” award.

The BBC ran several pieces, including a debate between two cartoonists. The Independent and The Irish Times also covered it, favoring the the intervention of Harry Potter author JK Rowling as the key hook.

Well, we’re sure The Herald Sun has listened and learned an important lesson, oh no wait… 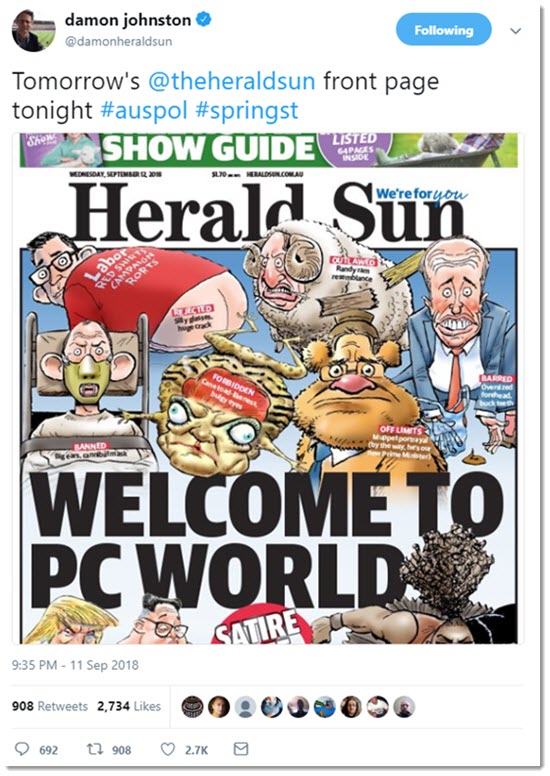 This isn’t the first, or even second time Australia has caught the world’s attention for mistaking grotesque racism for wacky hijinks or fair satire. All we can do now is wait for this to pass and brace ourselves for the inevitability that the world will some day discover the truly staggering number who do blackface for fun or profit in this country.

I’m pretty sure Knight and the Herald Sun will wear it as a badge of honor that they’ve pissed off the pro-Democrat part of the US press, Kathy Griffin (is she really in a position to pass judgment about the line between humor and offence? Really?) and Nikki Minaj (relevance: zero). I take their point that nobody complains when they caricature Donald Trump as a gross fat bastard, Tony Abbott as a big eared lunatic, Nick Kyrgios as a big lout, etc but because there have been racist caricatures in the past apparently noone can ever caricature an African-American woman again, that seems to be the thrust of it.

I might take the allegations more seriously if they weren’t coming from people so far down the “Team Serena” rabbit hole that they are treating a famous athlete throwing a tantrum at one dubious call by an umpire (and by dubious, we mean enforcing a rule that people claim anecdotally is not enforced consistently) as some legendary example of standing up against racism and sexism.

Law of the Instument – “Pass me Maslow’s hammer. I think I see a nail over here.”?

.. or even Maxwell’s silver hammer?

From a country that thinks it’t Ok to habitually shoot African Americans for no apparent reason…..

I’m with the other commenters. Everything the whingers are complaining about is what makes a cartoon. How many fat lips have you seen on cartoons of Australian white men? (in case you didn’t know, there are many, many).

And none of them are mentioning that she cheated, then lied about it, and finally had a dummy spit. What a role model that was! The whole thing was a cartoon before Mark Knight drew it.

And those two irrelevant and largely unknown American entertainers: neither of them wise or helpful. If all you’ve got is that sort of language, you’ve got nothing. Why did anyone even bother reporting them. And of course both from the nation that elected Donald Trump. Go call him your names! He at least deserves it.

All caricature subjects have big dilated mouths ’cause they’ve recently put their foot in it. We’re getting to the real essence of satire!
The only greater arrogance than Serena’s here is the USA’s. The assumption that the rest of the world is expected to assess everything through their unique historical lens, distorted with hypocrisy.
Such a facile show of PC, when we know the pursuit of wealth and privilege by all colours ensures that the genuinely oppressed are always pushed aside.

It used to be part of an expletive, used by those of the tinted persuasion, spoken as a single word “godamcocksukmuthafuksonovabitch”.