Mark Knight's cartoon was unmistakably racist, but the bigger story here is how News Corp Australia's unique brand of racism is embarrassing the company's global brand.

Do we need to say why Mark Knight’s Serena Williams cartoon is racist? Apparently, we do.

OK, well Williams is drawn much heavier than she actually is, and the pose is animal, not human; she has the appearance of a female gorilla on the rampage. The face is drawn mask-like – more Polynesian in style, than African, but y’know, all the same – the mouth is larger, and the lips are thicker. It’s not a caricature of any particular feature that Williams possesses, but of the purported general characteristics of African-Americans. Williams’ opponent, Naomi Osaka, a Japanese-Haitian woman, is drawn as white. Also the actual joke within the cartoon is just bad, which puts it in service to the physical caricature of Williams, which is the focus of the drawing. 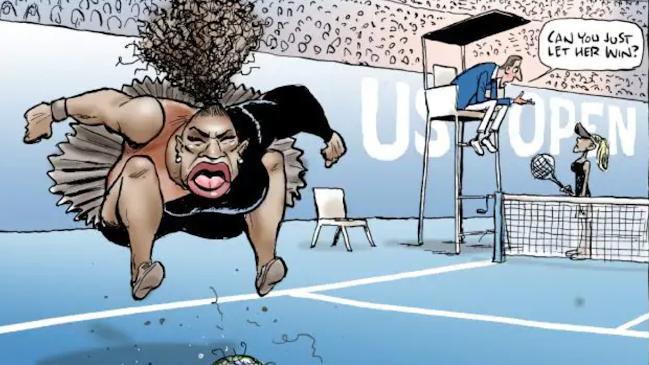 There is no racist caricature that does not use particular features to make a general argument. Certain ethnic groups of Jews do have larger noses than majority non-Jewish European populations; but the point of the Die Sturmer-style “Jewish nose” when repeated endlessly is to suggest sharpness, interest, parasitism, “sticking the beak in”. Mark Knight’s Williams caricature is a lubra picture; the bodily form suggests animalism, but the mouth suggests perpetual sexual availability. The big upper lips are lower lips, engorged; that’s how these drawings have worked for 300 years. (For an exhaustive account of this in Australia, see Skin Deep by Liz Conor, a book I can thoroughly recommend.)

The “Serena Williams” of the caricature is an animal force terrifying in its wildness – and robbing a wholly fictional white girl of her due – but also exciting in its promise of sexual abandon, and the possibility of use. Knight’s joke references an older white fear in global imperial relations: that blacks somehow have a life force that whites both disdain and envy. But it also references more recent white resentments: “let her win” is a way of dealing with the shifting racial and cultural power in society. The role of tennis in our cultural life is deliberately archaic. The culture is happy to cede, indeed subcontract, sports like basketball and boxing to non-whites; tennis is meant to be alpha boyz and skinny white girls banging it out. Williams’ curves were already challenging to some; Knight couldn’t even give her that, turning her into ape-woman.

Mark Knight’s cartoons are racist. Several of his recent cartoons reference every styling in the long, inglorious history of cartoon racism, from Australian lubra pictures, to Jim Crow graphics, to apartheid-era South African yuk-fests about Soweto. Blacks as spook shadows, blacks as animals, blacks as gangsters… it’s all there. People who have worked with him defend him as a nice guy, in over his head, but at this point, so what? Either he knows nothing of the history of racist caricature – in which case he’s willfully stupid and incurious – or he does, but doesn’t care.

Quite possibly Knight does believe his guff about it just being a funny “toon”. The paradox of cartooning is that left-wing cartoonists tend to be social analysts and critics who use drawing to express ideas, while right-wing cartoonists are realist graphic artists who move into cartooning, and are often less intelligent and more literal-minded than those around them. Pickering, Leak, Spooner, and Knight are/were all rigid thinkers, the first two going from a larrikin energy of youth to an unreflective curmudgeonliness, without an intervening period of mature reflection. Knight is the least talented, artistically and comically, of all of these, a mediocre draftsman – compare the brilliance of left-realists like Pope or Le Lievre to Knight’s tired Picture Post graphics to see the difference; compare also the treatment of Le Lievre for a poor graphic choice, once, to see it also – whose jokes start as obvious, and are then dumbed down by a Herald Sun editoriat profoundly cynical about its own readership.

Knight seems to think he’ll busk his way through what has now become a global storm. He may be right. News Corp execs seem to want to turn it into a culture war battle, which they think they’ll win. They may be right. But the doubling-down on it shows the dilemmas that News Corp Australia faces. It’s a redneck outlier in the News Corp empire, which is seeking to shift to a centre-right position elsewhere.

How it’s playing inside the Herald Sun – which had been trying to transition back to being a city paper of wider appeal, not a freakshow like the Tele – remains to be seen. But it’s worth noting this. News Corp Australia has failed to deliver the conservative right-wing triumph that their culture war was expected to gain. Now, their racist Australian content is leaking into their global brand. Watching how this contradiction is played out will be interesting – and a distraction from the deep shame and embarrassment that we are the sort of place where this filth can land on the editorial page of a major newspaper.

“… the News Corp empire … is seeking to shift to a centre-right position elsewhere.” Really? That certainly hasn’t been obvious so far, but I’d love to see some evidence of it.

Yeah, that was a jaw-dropper.

They haven’t taken outlets like the Times and the WSJ too much further to the right, because those are the respectability shields, but exactly how else is Murdoch and his TV and newspaper empire tacking back towards the centre?

Some valid points made by Rundle.

But try to recall the last cartoon which depicted the human subject in a flattering or accurate portrait-style manner. They are inevitably distorted, exaggerated & insulting… regardless of the person/s involved.

In particular I can’t see “the pose is animal, not human; she has the appearance of a female gorilla on the rampage”. This is people actively looking for racism, I have to say, hoping by force of will for a “monkey” reference that can be more easily stamped as obviously racist. The post is of a toddler jumping up and down having a tantrum, see also the dummy on the ground.

To me it looks like Knight was actually deliberately restrained. Sure, he’s made Serena a bit larger than life, whatever. The “he made Naomi Osaka look white!” thing is way overplayed; he’s made the blonde streaks in her hair a bit more prominent. Again, people finding what they want to find.

And this, too, is finding what the viewer wants to find. Guy’s description of the cartoon might be somewhat overdone but he is spot on about the racism of it. One look is enough to recall the “Sambo” style of racist caricatures from an era in the US, when practically every white viewer could see the racist point of laughing at those subhuman blacks. And, as Guy says, the joke is dumb. If you wanted to do a cartoon, a more life like caricature, like David Rowe’s, with a dummy spat at the referee would have sufficed. But I agree with others that Fox News is still far right and Murdoch is only trying to export it’s far right view to Australia, as he has been doing for yours with the oh so balance line up of commentators in the Australian, now lit up with Sky after dark and racist guff for Victoria, which has failed over many years to shift as far right as Murdoch wants.

Agree completely. Some people looking for and finding what is not there. All defenders of the indefensible, appalling behaviour, of SW.? I thought the cartoon was totally accurate of the tantrum.

“All defenders of the indefensible, appalling behaviour, of SW.?”

If you want discussion of Williams’ behaviour, and the efforts of some left-liberals to excuse, explain or contextualise it, I suggest you go to Kishor Napier-Raman’s earlier article and its comments section.

Guy, you must have been squinting really hard to see all that in the cartoon. I was wearing my glasses and all I could see was the usual exaggerated, unflattering caricature style typical of cartoonist portraying a subject in the context of the story they’re telling!

It’s rare for me to disagree with Guy and almost unheard of to side with the Evil Empire. The more strands Guy stretched into this piece the less convinced I became. The nature of caricature is a specific form of art but with each practitioner quite distinct. Those who wish to see racism and sexism will see it no matter what.

It’s not a brilliant piece of work and I suppose opinion will be affected by how one sees the incident it’s based on. Williams is undoubtedly a truly great player but part of the modern tradition of gamesmanship and a bad sport. She fully deserved the penalties and claims that others do similar is no excuse or defence. I hope this heralds a new era in enforcing standards. Next up abolition of screeching and grunting.

Finally congratulations Naomi. May you win many more major events.

Millionaires, bullies, losing players, specifically a cheat and a liar (she did both) – not a good look.
No apology. Did she refer to ‘my court’?
Have required standards risen since the McEnroe days?
Why should people overseas cut their cloth according to American ideology?
Do background figures (the focus was on the foreground screamer) deserve full detail -including the umpire we might add?
Can cartoonists no longer caricature?
And when will progressives realise that symbolic politics over PC/IPolitics matters is just ammo for the looney Right?

To Crikey eds
This has been awaiting moderation a long time.
If necessary revise this line

letterwriter, you’re confusing the racist cartoon with the on-court behaviour.

Or are you saying that bad behaviour deserves a racist reaction?

‘It’s not a brilliant piece of work and I suppose opinion will be affected by how one sees the incident it’s based’.

Guy’s article isn’t totally above critique of course, however, he has raised a very important issue regarding the current appalling level of ’Cultural Wars’ debate that Murdoch is manipulating through his global media empire!

Cheez Guy!
You have one hell of an imagination to interpret that load of cobblers from the cartoon.
Some glasses could be handy also, for example Osaka is not the same colour as the umpire who by the way was quite dark skinned himself.
Promise of sexual abandonment! The lips and mouth suggest perpetual sexual availability !!
If that is what U see then you had better not go out alone, for you’d apparently be in great danger of assuming something inappropriate, and getting yourself into BIG trouble.
The body form suggests animalism as drawn. have you seen a photo of Serena? She is a big lady, almost sumo like , but non the less very athletic.
At the time of the fuss starting a comment was made in reply to Serena saying the Ref’s decision was sexist.
The comment -‘ Its a good thing her opponent is also dark skinned or the perpetually enraged and irrational brigade would be claiming the decision was racist”. Well you and some other nutters have managed to do that, one way or another.
Now imagine what that caricature would have looked like if David Rowe had drawn it. Then take two Valium tabs and go and have a lie down.