New report signals bright outlook for Bougainville, despite dark past

Recently released economic analysis could signal great things for the PNG island, but only if lessons are learned from its catastrophic history.

The name “Bougainville” rests uneasily in the Australian subconscious, but many Australians may not be able to recall exactly why. A quick refresher is in order, because we’re about to hear a lot more about the place. And, just for a change, some of the news is good.

Bougainville is the largest island in the Solomon Islands chain to the north-east of Queensland, with a population of around a quarter of a million people. The island is presently an autonomous province of Papua New Guinea, with a referendum on full independence due to take place in mid-2019. Settled by Melanesian people at least 33,000 years ago, a unique matrilineal culture evolved with strong obligations to country and coming generations. The place has a bruising modern history, with colonial occupation beginning with a carve up between Germany and Great Britain in 1886 before authority was passed to Australia in 1946.

While under Australian government control, Rio Tinto’s Australian subsidiary CRA was given free rein to prospect anywhere they liked. Then, in the mid-1960s, CRA hit one of the largest copper/gold deposits on Earth. 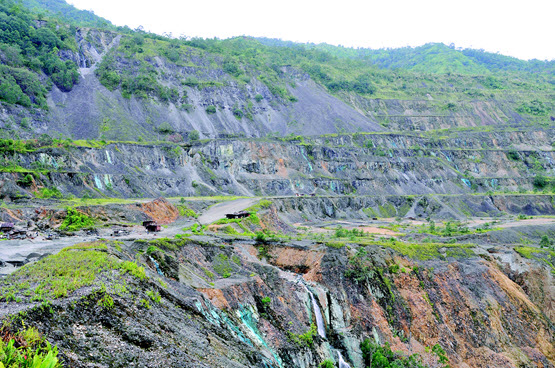 The Panguna mine (Image: Christina Hill)

Without asking locals, the Australian authorities granted the company an 84-year lease to open the Panguna mine in 1972. Local landholders were removed from their land without compensation, and the company was given permission to commence operations without building waste storage dams. Instead, roughly a billion tonnes of contaminated, finely powdered mine wastes were dumped into the Kawerong and Jaba rivers over the next 17 years.

With the traditional economy shattered and pristine waterways vanishing under a deluge of mine tailings, the Australian colonial authorities and then the state of Papua New Guinea soon sought to suppress demonstrations with local police and paramilitaries using tear gas, beatings and mass-arrests. For a time, the mine was responsible for around 40% of PNG’s gross domestic product — the money simply passing over the heads of the people suffering the immediate impacts. It was soon clear that this form of “development” would be all cost and no benefit for the vast majority of local people.

In 1988, a smouldering campaign of sabotage and stop-work actions exploded into a full-blown civil war. At the end of the decade-long war, and a naval blockade imposed by PNG, 10% of the island’s population — 20,000 people — lay dead.

The Panguna mine has remained closed to this day, a reminder of just how violent a “resource curse” can be.

The mine’s potential reopening is now dangerously entwined with the referendum campaign for Bougainville’s full independence. At issue is the question of whether the island as an independent state is even viable without the mine. Without a circuit breaker, it seemed that full independence would come with the mine restart as a fait accompli.

On Wednesday the circuit breaker arrived, with the publication of a detailed analysis by the Jubilee Australia Research Centre. The “Growing Bougainville’s Future” report contains a remarkable history of the island before and after the disastrous imposition of Panguna, but that is only part of its value.

The authors undertake a careful assessment of the “hidden strengths” of traditional Pacific Island economies and the potential for other sectors — such as agriculture and sustainable fisheries — to generate employment and revenue. An alternative development pathway emerges in the combination of traditional and more recent economic strategies. In simple language: this island doesn’t need the mine in order to prosper.

The report concludes with a forceful declaration by the Melanesian Indigenous Land Defence Alliance — a coalition of “traditional leaders, community members including men, women, youths, children and people with special needs, churches, academics, regional NGOs, and international supporters”. The declaration notes that “we believe that the ways in which land and sea are used and distributed should be determined by Melanesian custom, and not by foreign systems”.

Jubilee Australia agrees with this sentiment noting that, “Bougainvilleans have their own history, knowledge, social institutions, cultural assets, traditional economy and systems of customary land tenure which can and should provide the foundation on which Bougainville’s future can be built”.

Australia bears heavy responsibility for the catastrophe of Bougainville, and we suffer from our own slow-burn resource curse here at home. Good news from Bougainville — should this movement for change prevail — will set a powerful example to follow.

Thanks for this interesting article

Nauru did so well out having its guts ripped out, why would that same benefit not be bestowed on Bougainville?
Surely another cosmic joke that such a tiny piece of suitable real estate (TM Des Ball) should be such a… coff, coff .. gold mine.
Pity the inhabitants couldn’t find their title deeds when ‘discovered’.

I know a bit about Bougainville – I was there when CRA were prospecting. The article by Mr. Ludlum is simplistic and facile regarding an extremely complex series of events.

The local people WERE consulted – I was one of the field officers who did the consulting – and it was done thoroughly and sympathetically as we field staff had no reason to be pro CRA.

Unfortunately local perceptions were distorted by some counter propaganda from a number of Catholic Marist Missionaries – who were mostly American and could not abide the British/Australian principle that underground minerals belonged to the Crown ( i.e. the national government). Some other non government foreigners also became involved in agitating against the mining proposals.

Compensation to landowners was offered, but as I recall was rejected for a variety of reasons.

The overall situation became complex as the Canberra government lacked flexibility in the face of opposition which often seemed to be being manipulated by non PNG agitators.

The principal land alienation involved was actually owned by a prominent expatriate who had the huge Arova Plantation taken over by the government and on which the township was to be developed.

The subsequent events became very complex and did involve clumsy actions taken by the Independent PNG government in the face of a takeover on Bougainville by armed thugs.

It is conceded the mine did result in substantial environmental damage – which is probably inevitable with any big mining enterprise.

Contrary to the “dark” tone background of Mr. Ludlum’s article, I believe the Australian government at the time acted with honourable intent as it planned to set up the imminent self governing nation of PNG with a stable income source.