Abbott cops a bad review, David Speers blows his own trumpet, and "saving" Australia from the left agenda.

Abbott restores trust in politics by ducking tough questions, a certain Sky News presenter is music to our Speers, and the Eastern Suburbs Conservative Forum is holding the worst party in the world. From the Crikey grapevine, it’s the latest tips and rumours…

Man Abbott Town. As we told you last week, dignity expert and former prime minister Tony Abbott addressed his Warringah electorate at a breakfast event on September 7 — the same day he tweeted “Today is the fifth anniversary of the election of the Abbott government. It’s a good government, getting better!” like someone who had not fully processed their grief over a dead loved one. 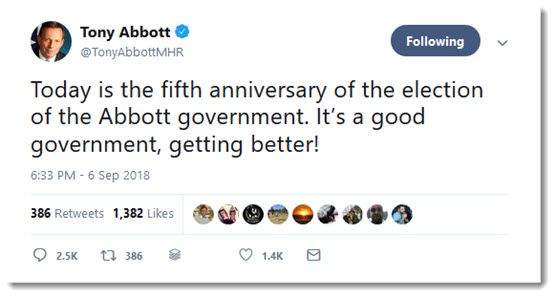 The title of the talk was, amazingly, “Restoring Trust in Politics”. However, it would appear he didn’t succeed in restoring the trust of at least one constituent, who got in contact to say she was “appalled at how staged and manipulated the whole event was”:

My Year 10 daughter and I had attended after reading on the flyer that it was an opportunity to bring up issues with our local member. My daughter had prepared her questions weeks ahead and missed school for the occasion. Her questions were related to an issue dear to both of our hearts — that of some kind of reasonable action on climate change. Despite raising my hand at least 20 times and indeed holding it in the air for long periods and getting up to inform the person holding the microphone that my daughter was missing school to ask her question, Abbott directed the people holding the microphones from the stage to only give the microphone to people he knew (acknowledging the majority by name) … It became clear to me that this event is staged carefully to prevent unknown people with potentially dissenting views standing up and having their say… shame on you Tony Abbott — time to listen to ALL views from those in your electorate!

We asked Abbott whether there was any favouritism in how questioners were picked, but he didn’t get back to us before deadline.

The music of the Speers. A tipster who spent last night breathing the cultured air of the Melbourne Recital Centre, watching the Australian Chamber Orchestra’s Transforming Strauss & Mozart, spotted something in the program that was music to our ears. The national tour partner is our old friends at Sky News, and sensibly they forewent putting us in mind of their classical music loving figurehead. Instead the program contains perhaps the most reassuring sight imaginable, political editor David Speers, in his smart casuals, leaning over an antique piano holding a trumpet, that broad easy smile enveloping us like an old jumper. 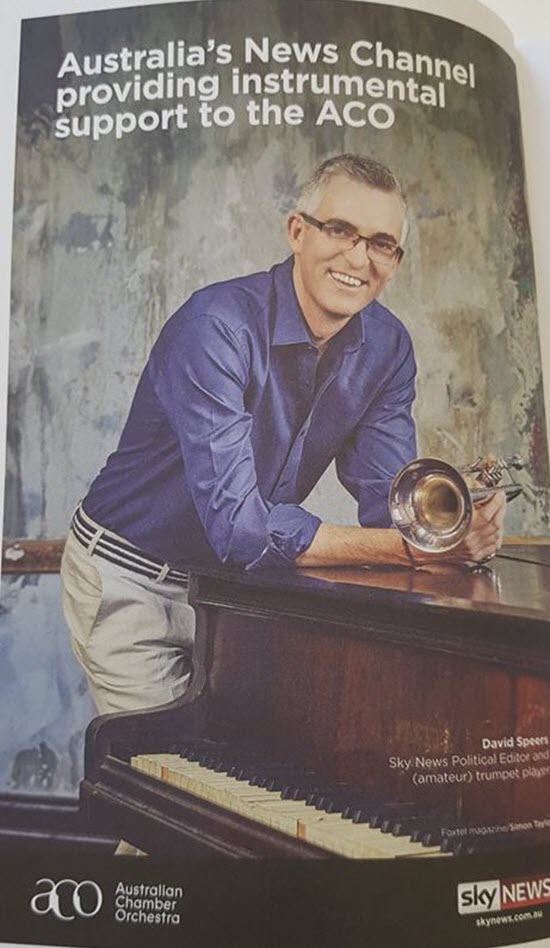 Aaahh, now that’s reassuring. “Does David Speers actually play the trumpet?” was not a phrase Ms Tips thought she’d ever enter into Google, but it turns out Speers is legitimately a musician, reputedly delighting the crowd at the ASTRA awards in 2010 by finishing his hosting gig (incidentally, this was June 25, 2010, following on from a fairly big day in the office) with a few bars. 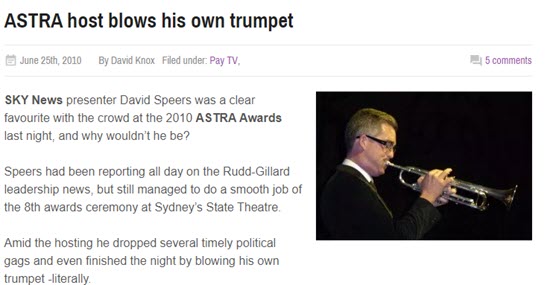 Tragically, Ms Tips has been unable to find any footage of that night, or any Speers trumpet performance, but we’re sure his approach to melody is just as clear, nuanced and focused as his political analysis.

More election material. Victorian Labor are clearly going hard for the swing seat of Prahran — which ricocheted between Labor and the Libs for 100 years before ending up in the hands of the Greens in 2014. A tipster who previously shared the start of the leaflet campaign in their area has gotten more material from Labor’s candidate Neil Pharoah, this time spruiking Labor’s free TAFE program.

Our tipster tells us they’ve not seen any material from either of the other contenders yet. Have you received any material? Let us know.

Eastern suburbs for Western Civilisation. Coal-munching backbencher Craig Kelly has taken time out from his busy schedule of saying things on Sky News to spruik his involvement with Back from the Brink … Saving Australia from the Left’s Agenda — a “special interest night” organised by the NSW Liberals. The panel discussion will feature Kelly, Tony Abbott, Senator Jim Molan and Member for Canning Andrew Hastie as well as Australian Conservatives Senate candidate Riccardo Bosi. Appropriately, given the sensibilities of the panel, the flyer looks like it was designed in Microsoft Word by someone who regards all technology after the trebuchet as a terrifying affront to God: 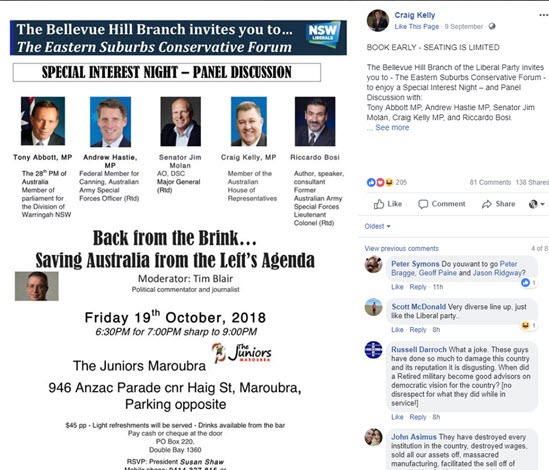 Oh, and it’s moderated by that old charmer Tim Blair. If you’re interested, it’s 7pm sharp on October 19. Ms Tips would love to attend, but sadly she’s busy that night attempting to drink an entire bucket of sand.

Abbott’s capacity for evil, stupidity and delusion knows no bounds.

As a committed lefty, I would enjoy every second of these lugnuts expounding about what’s wrong with politics.

“We asked Abbott whether there was any favouritism in how questioners were picked, but he didn’t get back to us before deadline.”
I think we can deduce from this which category of questioner YOU belong to, Ms Tips!

Bit of hope that the voters in warringah may not re-elect him.

Been Around
Reply to  bushby jane

True justice would be that Abbott suffers the same humiliation as his former protector, John Howard.

The voters of Warringah are among the wealthiest and best-educated in the country. Yet their Liberal branch keeps pre-selecting a lunatic.