The ABC’s ‘what’s wrong with this?’ moment raises bigger question

A lag between global debate and Australian demography on the one hand and the traditional media on the other that caught the ABC off-guard.

The ABC hit a wall last week when it tried to glide past criticisms of the Four Corners interview with US ethno-nationalist Steve Bannon, with its traditional nothing to see here, tweeted out as: “What’s wrong with this? NOTHING!”? 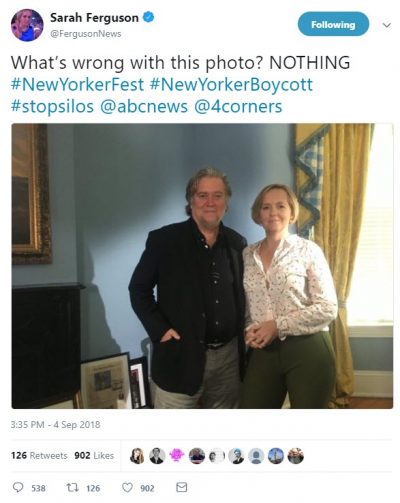 Instead, the ABC got push back. And we got a debate about the responsibility of media to challenge ethno-nationalism through a journalism that reflects Australia’s diversity. And, in private chats around the country, many journalists came to the conclusion: it reflected poor journalistic judgement.

The push back took the ABC and its senior journalists by surprise. We haven’t really had the no-platforming debate here in Australia because, well, we don’t own any of the big tech platforms.

Instead, we have our own media platforms, but the closest we’ve come to that debate was back in August when a neo-Nazi turned up on Sky after dark. Because it was Sky and the neo-Nazi, was, well, a Nazi, it left us confident that this no-platforming lark was pretty easy.

Sure, we had the on-going – and unresolved – discussion about Pauline Hanson on Seven’s Sunrise, but morning commercial TV is easier to ignore.

No-platforming relates to platforms that are functionally infinite — like Facebook. Forty-minute chats on the flagship Four Corners with one of Australia’s outstanding journalists are not. Any choice of a guest, “de-platforms” the millions of other options.

In normal times, an all-caps “NOTHING” and cries of “hysteria” would have been enough to shake off the criticisms. But these are not normal times. These are Trump times when ethno-nationalism challenges everything we thought was long settled.

And it’s a time when journalism is changing, becoming more diverse – albeit too slowly and far more slowly than Australian society. It’s this lag between global debate and Australian demography on the one hand and the traditional media on the other that caught the ABC off-guard.

Coinciding with the New Yorker debate meant the 4C’s controversy found itself in the middle of a far more sophisticated and passionate debate in the United States, forcing the defence to shift from “he’s a newsmaker” on to free-speech-for-fascists fundamentalism before ending up with the assertion that the interview was actually calling out racism.

As ABC journalist Jennine Khalik tweeted: The media can better report “by properly dissecting {Bannon’s} legacy and offering other important voices that can retort…we can engage with people in a civil, firm way without glamourising them (headlining festivals etc).”

It was a reminder that, while Australian journalism is still overwhelmingly white, it’s changing. A more diverse ABC would not have made the misjudgement that it did, either in structuring the program as a stand-alone interview or in the way it responded to criticism.

It’s often hard to sense when the tide turns in journalism. Publicly, Australian journalists like to act as though they never make a mistake or misread a situation. But privately, journalists think and talk about the craft — a lot.

Through that process, attitudes change — stealthily, in private chatter over coffee, across desks in newsrooms, in the pubs and, almost without us understanding how it happened, the craft thinks something it didn’t think before.

That happened in journalism last week, shifting from a knee-jerk “but press freedom” to a more nuanced critique of the journalism involved.

Social media lets us track it in real time: sometimes in public on Twitter or spilling into the mainstream media as per Jason Wilson’s take in The Guardian. Sometimes by absence: how many journalists jumped onto the all-caps NOTHING bandwagon?

This frustrated journalists of colour, left to do the heavy lifting in public. Osman Faruqi (also now at the ABC), said of Wilson’s piece: “let’s not pretend the same arguments weren’t made by brown and black folk yesterday, and summarily dismissed.”

The ABC’s Sophie O’Neill pointed the way forward for both the ABC and for journalism: “the ABC desperately needs to become more diverse. A wider range of views & experiences needs to be better reflected”.

Or as Ruby Hamad suggested on the weekend: the ABC needs a bit less outrage and a bit more listening.

Following up the debate about the 4 Corners i/v with Bannon, the Drum discussed platforms for free speech last Friday (or was it Thursday) – one of the two. Discussants included David Marr, Kate Carnell and Nyadol Nyuon, an Australia lawyer from a Sudanese background.
Ms Nyuon gave a detailed, composed and rational account of how hate speech, under the protection of free speech, has consequences. One might have imagined that Mr Marr, as a gay man, might have had some understanding of the implications and effects of hate speech. Instead, in an approach that would be the envy of Gerard Henderson, Mr Marr chose to discount Ms Nyuon’s comments and instead appeal to the higher ideals of an occupant of the ivory towers. He made it clear that he regarded observance of the principle of higher importance than the lived experience of people who suffer because of his higher ideals.
I used to think he was pretty smart, but I think I only got it half-right.

Yeah, me too. I always have thought he was more balanced than that. I think his thought processes were B/S on this matter. Bannon gets mega media time and print to espouse his views, ABC was ??? to give him an excess of time to further blather on. You cannot reason with the unreasonable. You just have to switch off.

To my mind, I reckon that Marr’s amateur theatric histrionics can sometimes get a bit ahead on himself.

Again, what did we learn (not least as it affects Australia? anything?) from that piece that we didn’t know already, having gleaned it from foreign journalism (News Hour?)?
Here was a narcissist with all his own, private bin, facts – not to be swayed by a soft/civil interview.
…… Then, for a clown like Bannon, to judge “What a good interviewer”?????

I found this a bit waffly. Sarah Ferguson might be judged down the track to have overestimated Bannon’s importance but her alert to a campaign, already in full swing, to push Australia into a policy of confrontation with China is, in my view, timely. It is against Australia’s national interests to adopt such a policy and debatable as to whether it is in the interests of the US as well. Policies of confrontation did not lead to a good outcome in WWI, although we should also be aware that policies of appeasement did not lead to a good outcome in WWII either.
I think we should look back to WWI in this case. After all, China merely looks likely to become the world’s biggest economy and a technological leader in the way that Germany passed the UK before WWI. The rest of us should sit back without great concern at this. Certainly China is not going to get the pre-eminence that the US did after WWII and which it has only recently lost with the rise of Europe and China.

The absolute last thing the ABC should do is listen more to the perpetually offended.
It was a fascinating interview with a despicable man.

Well said Phen. We don’t need the pontifications of the perpetual smarty pants to tell us how to suck eggs. I commented after Razer’s piece last week that sometimes we just want to hear an extended piece on a topical person in their own words. The comments there indicated some diverse and smart observations.

The more Bannon went on the less scary and impressive he got. Looks like he and Comey and assorted slippery types all go to the same media prep school. The idea that a rich guy could be sure all those poor believers would stay the course for a recession or three was gobsmacking. And for a guy who wouldn’t know one end of a factory from another to be so sure his economic (not trade) war was going to restore US manufacturing- of which there is still plenty anyway – was embarrassing.

I learned years ago these high finance types can be remarkably blind about real businesses.

The idea that we’re at some political and cultural crossroads is myopic drivel. Works for Bannon and seems to work for all the “of colour” barrackers who can’t see past last week. Look back at the Viet war years, the Catholic Protestant divide years. And so on.

A thoughtful piece, Chris. I’d be disappointed if thinking journalists didn’t take on the message that what they present needs to be much more nuanced and critical than what was presented here.