When it comes to the economy, Turnbull bested Abbott by a large margin

Turnbull presided over booming employment and a lift in economic growth, but failure to act on wage stagnation will leave a tarnished legacy.

Malcolm Turnbull will go down as one of Australia’s more economically and fiscally successful prime ministers and Tony Abbott’s superior in virtually every way — except for the nagging problem of wage stagnation. 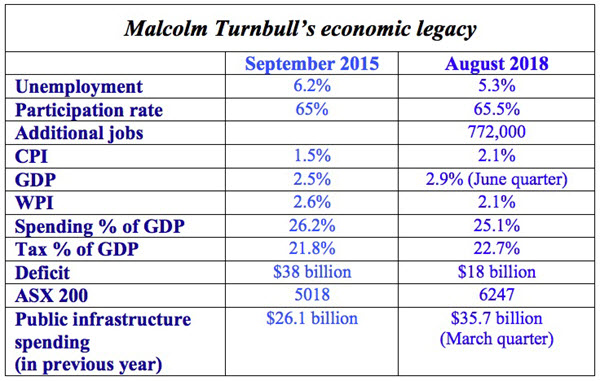 Turnbull’s biggest achievement was on employment, with a remarkable 772,000 net jobs created while he was prime minister, including in the boom year of 2017, during which 400,000 jobs were created in trend terms. While a large proportion of these jobs were in health and education, rather than private sector industries, that had the side effect of lifting female employment significantly — over 400,000 of the 772,000 jobs went to women, lifting the female participation rate a full percentage point and lifting the overall participation rate half a per cent — a remarkable achievement at a time as the Australian population ages.

Turnbull also oversaw a lift in economic growth out of the doldrums it was in after 2013, while inflation picked up from a disturbingly low level under Abbott to just within the RBA’s target band, although whether it can stay there isn’t clear yet. Part of this was driven by a substantial rise in infrastructure spending, which despite Tony Abbott’s pretensions to being the “infrastructure prime minister”, had fallen off a cliff under him.

Turnbull could thank the states for the rise, rather than his own investment — especially the NSW government’s big-ticket spending in Sydney — but it helped that Turnbull ended Abbott’s war on renewables, which had almost killed off renewable energy infrastructure investment. Sadly, however, the NBN continued to be plagued by the disasters inflicted on it by Turnbull himself when communications minister.

Turnbull and his Treasurer Scott Morrison also dramatically improved Australia’s fiscal situation, slashing the deficit and putting Australia on track to surplus in 2019-20. That’s in dire contrast to the situation under Abbott, when the deficit blew out from $19 billion in Labor’s last full year to nearly $40 billion. A rise in commodity prices helped the fiscal situation, of course, pouring extra tax revenue into government coffers, but they also brought spending back under control.

According to Morrison, when Abbott was ousted spending was running at 26.2% of GDP; now it’s back at around one quarter. To Turnbull’s credit, he followed Labor in closing superannuation tax concessions, at substantial political cost, and while the long-term consequences of his government’s suite of multinational tax measures can’t be judged for several years, there may well be fiscal benefits from those as well.

On wages, however, Turnbull fared poorly — though not as poorly as private sector workers who have endured real wage cuts. This was a problem under Abbott as well – after 2013, wages growth began falling from the 3-4% level seen under Labor, seemingly ratcheting down every quarter. But it reached its nadir last year when wages growth fell below 2%, on Turnbull’s watch.

Turnbull and Morrison don’t wear all the blame for this: in virtually every major western economy, wages have stagnated in recent years even when unemployment reached record low levels, leading policymakers in treasuries and central banks to rack their brains about why their economic models weren’t working as they should.

But what Turnbull does bear the blame for is refusing to take wage stagnation seriously as both a political and a policy issue, treating it with a combination of Pollyannaish “round the corner” optimism and claims (more accurately, lies) that company tax cuts would push wage growth up, maintained even when wages growth was falling in the US in the wake of Trump’s tax cuts. More particularly given even the International Monetary Fund now acknowledges that industrial relations deregulation has played a part in undermining wages growth, it’s clear Turnbull and the Liberals didn’t want to know the real way to fix the problem.

Overall, Turnbull had good luck and was a fair manager. With signs jobs growth has slowed to a more normal pace and with building and investment coming off the boil too, Turnbull’s successor might not have as much luck.

” Sadly, however, the NBN continued to be plagued by the disasters inflicted on it by Turnbull himself when communications minister.”

That one line sums up what will be Malcolm Turnbull’s legacy. He said we could have a “sooner, cheaper” NBN at $23 mill, quickly upped to $29 mill when the Liberals came to power, and now, what is it ? North of $50 mill ? and it’s not done yet.

Turnbull’s lasting legacy will be wasting probably $40mill plus on a half arsed NBN. Where our near neighbors have 1000Mbps, Turnbull said 25Mbps was enough for anyone.

With Malcolm and his wife flitting off to their home in New York straight after his resignation, it reminds me of what Nick Carraway in The Great Gatsby said of Tom and Daisy Buchanan – they retreated into their wealth and left it to others to clean up the mess.

Actually BJB those $’s are in Billions. His legacy will be wasting over $40 billion on a white elephant. And sooner or later we’re now going to have to spend north of the false $93 Billion he accused the original NBN of costing in order to fix it. What a legacy!

oops – all the figures should be Bill not mill !

I’m sorry, Bernard, but there’s no reprieve for Malcolm. What he did achieve, he achieved through serendipity, and even if serendipity hadn’t been a factor, the sum of his achievements is still insufficient to offset his greatest failure: the NBN.

That Tony Abbott wanted to destroy the NBN was only an expression of his malevolence and stupidity and ignorance. Turnbull is none of these things. He was possibly the only Liberal with a full understanding of what destroying the NBN would mean to the future of this country and yet he went ahead and did it anyway. All in the name of personal ambition and hunger for power.

“but it helped that Turnbull ended Abbott’s war on renewables”

Citation needed. The guy who seized the South Australia blackouts to shit all over renewable energy and trot out the tired lines about how you need power when the sun isn’t shining and the wind isn’t blowing was….. Malcolm Turnbull. In person, not even through proxies.

In any event, the basic problem with this article is talking about the various economic indicators as “Turnbull’s legacy” “Turnbull’s achievement” etc without saying what it is Turnbull is meant to have done to cause it. If he didn’t do it it’s not his achievement.

Journalists were way, way too easy on Howard and Costello in office for the same reason, but at least they were passing laws and implementing policy and could point to things they could say they were doing to assist the growth coming from the mining boom. What’s Turnbull meant to point to?

If people in the street thought that Turnbull’s policies, as opposed to generally improving global conditions and/or State government actions, were improving the economy he’d have probably been travelling well. But even Turnbull couldn’t explain to voters what policy or policies of his were meant to be leading to employment improvements.

Well, it’s the same in the U.S.
93 month of job growth and a boof who’s now been there for 2 years is stealing all the credit for uninterrupted job growth. But nobody ever mouthes the words. “We will always have 10% unemployment, no matter what.” Remember JOHN Hewson’s election words in front of Kerry O’Brian at the ABC. So who are we fooling.?

All the stats are false, anybody that believes the unemployment figures are fool,s as are the job figures, if you work one hour in a fortnight you are not considered to be unemployed, wages are forced down by the influx of migration and 457 visa workers and the governments attack on the unions, the pension is hardly rising and welfare payments are going backwards, if labor encourages wage increases and improves welfare payments the economy will boom as the underlying strength is there but has been held back by income stagnation promoted by the coalitions trickle down ideology, you only have to look to the U.S to see what a social and economic disaster that system is, the 1% grow richer while 99% slide ever deeper into 3rd world poverty.