Labor’s Tony Burke has a surprisingly big vision for the arts, but can he back it up? Crikey sat down with him to find out.

For a politician in opposition, Tony Burke is a busy guy.

The Labor frontbencher has a swag of portfolio responsibilities in Bill Shorten’s shadow cabinet, including hotly contested political battlegrounds like citizenship, multicultural affairs and water. He’s Labor’s leader in the House of Representatives, responsible for day-to-day tactics on the floor of increasingly interesting parliament. Tony Burke is also the Labor Party’s spokesperson for the arts.

The arts and culture are traditionally Labor strongholds. Artists and cultural workers are generally progressive types, many of whom still remember the glory years of Whitlam and Keating fondly.

In what seems like a lifetime ago, Burke was Labor’s last arts minister, inheriting the role from Simon Crean in 2013 in the turmoil of Labor’s civil war. Mark Dreyfus took over the shadow arts responsibilities after the Coalition victory of 2013, where he proved a diligent and effective opponent to George Brandis and Mitch Fifield. In the post-election reshuffle of 2016, Burke got the role back, but not without ruffling a few feathers — insiders say Dreyfus wanted to keep it.

Since 2016, Burke hasn’t had a lot to say publicly in this portfolio role. Labor is yet to put forward a proper policy for the forthcoming federal election (of course, the Coalition didn’t bother to release one in 2013 or 2016). Crikey spoke to a Labor source at the vernissage of Melbourne Art Fair, who was critical of Burke’s tenure as arts spokesperson. “When is he going to pull his finger out?” the insider asked.

Arts insiders argue that Burke has been active behind the scenes, spending a lot of time in meetings and roundtables and appearing at industry events like this week’s Big Sound music industry conference in Brisbane. 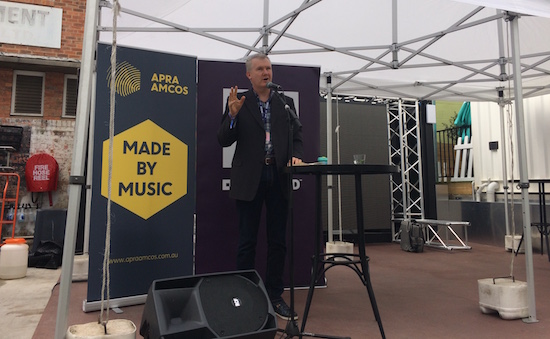 There are plenty of issues for Burke to grapple with. The screen industry is demanding reform to local content rules in order to protect Australian producers. The government is currently reviewing the status of the major performing arts organisations, a perennial flashpoint in the sector. Visual artists and writers are asking why the performing arts continue to receive the majority of federal arts funding. And behind the scenes, there is genuine disquiet in the Indigenous arts sector about the appointment of former Rio Tinto executive Sam Walsh as chair of the Australia Council.

Crikey sat down with Burke on a recent trip to Melbourne, before the recent carnage in the Liberal Party, and asked what sort of arts minister he would be.

“We’re still not quite settled for commitments that we’ll take to the election,” Burke began, “but the consultation’s been pretty intense for a long time. What I’m trying to find a way of delivering is to make sure we’ve got a clear vision beyond ‘we will restore the cuts’.”

Some of the consultation has clearly been with the screen sector. While not committing to anything, Burke is signalling that Labor will move to impose content restrictions on internet platforms.

[Should Netflix be forced to screen more Australian content?]

“When we introduced content quotas for free-to-air television, it wasn’t because we had a passionate belief in bandwidth, it was because we had a belief in Australians watching their own content and so the fact that we’re over a different method of streaming [to broadcast] shouldn’t change the end point, the objective should be the same.”

“My sense of all of the decisions for rights holders is: it needs to go all the way back to first principles. The reason we introduced quotas … was because we wanted our stories to be told. If we don’t get the policy right, that’s under threat.”

When it comes to arts funding, Burke reiterated Labor’s 2016 election policy to restore the funding cut from the Australia Council. He also recommits to the arms-length model for arts funding.

“We went to the [last] election to restore the cuts. I’m always reluctant to do too much outside the arms-length funding model. Criticisms of the Australia Council will always be there … I really don’t want to ever get to a point where you run the risk where artforms that a minister particularly likes are the ones that are funded.”

What about the funding mix, which currently favours major performing arts organisations at the expense of the rest of the sector?

“And that’s one of the issues I’m trying to work through,” Burke replied, “how do you deal most effectively with artforms that aren’t always automatically through the door?”

“The Australia Council for example has had a very limited engagement with popular contemporary music, they could point to examples, but in terms of impact on the total industry, it’s not as big. When we established the Office of Live Music, we went outside of the Australia Council and went directly to APRA. Had we done it any other way it would probably have been cut immediately after the election, and it has made a significant difference.”

Perhaps most encouragingly, Burke appears to have a bigger vision for the arts in a Labor government. When asked whether it was the role of an arts minister to defend the importance of the arts and culture in an increasingly polarised democracy, Burke was enthusiastic.

“I remember being really frustrated that when I was minister, I remember being handed briefing notes when I was speaking at an event opening or exhibition of whatever, and they were: ‘how many people that were expecting to come, how many dollars it would bring to the town, how many other benefits there would be’.”

“And I remember saying to one of the people responsible for giving me the briefing notes, ‘Is there any mention of the art?’ And [the reply] was ‘Oh yeah, ministers normally like to make the economic case’. If the arts minister can’t make the artistic case, it will never be made by anyone … And here’s the thing with arts policy, if you accept the frame that this is only justified because of its economic merit, then the moment another industry turns up that has more economic merit, you’d switch.”

Such sentiments will be music to the ears of artists and cultural producers. Burke is an enthusiast for culture: he concluded the interview by imploring that “what the arts is able to do goes right to the core of what you’re meant to be trying to do in public life”.

But will the argument stick? So far, the ALP has yet to unveil any concrete policies. The challenge for the sector will be to make Labor put its money where its mouth is.

It is not only the visual and performing arts that need attention. Year upon year of serious budget cuts, applied in the name of efficiency dividends, have taken a terrible toll on our national cultural institutions which are now getting to the point where they are unable to fulfil their national role obligations.

The National Library, National Museum, National Gallery, National Portrait Gallery (scheduled to be closed for much of 2019 for unspecified but serious building problems), Museum of National Democracy (in old Parliament House), the National Archives and the National Film and Sound Archive all need urgent consideration of their parlous economic circumstances and to be included in any arts plan.

If any given example of the yartz were worth a pinch of the proverbial it would not need subsidising.

Depends on what sort of society you want. Given the behaviour of Australian sportspeople I’d be inclined to remove some of their outrageous funding and share it around to all other parts of society. Plus of course, as someone that benefited from FULLY subsidised University education it would be ludicrous for me to go all “free market” on the issue of arts funding.

Indeed sport is popular, but it is drowning in cash and media attention. If the arts broadly had more than a whiff of that support the impact on society would be to the good.

Agree 100%…but I just had a vision of a “mad Monday” at the end of the Archibald prize….with pissed artists getting their gear off in a pub and generally behaving like lunatics.

hehe. Well they could almost get away with it if they presented it as an art installation. I call this “Australian Sport, The Aftermath”.

I too am disgusted by the behaviour of sportspeople but if the bad behaviour is done in the context of the sport without any real world consequences, I say that’s a poor reason to withdraw any funding. It sets a bad precedent where various types of funding can be withdrawn on the basis of distaste.

A proper reason to withdraw it is that Sydney, Melbourne and other major centres DO NOT require new stadiums and venues while other important institutions are going wanting.

The entire city of Melbourne has reached the point where it is designed for a wealthy tourist visiting for a major sporting event, whilst increasingly hostile to everyday citizens attempting to work and live there.

Another reason is the disproportionate amounts afforded to rights holders like Foxtel (which receives millions in taxpayer handouts), which is paid for at least in part by funding received by major sporting bodies.

Actually, sports funding is exactly like the arts model and our wider economy at large – designed to load ever-increasing costs onto an ordinary fan and/or working person whilst funnelling all the benefits to those who already have too much.

Classic neoliberal thinking: only the market can disclose anything significant about human wants or needs, and should therefore be the source of all political and social decisions.

Ah, the Arts.
So just why does Barry Humphries call them “The Yarts”? A bit like yachting.
Because culture and The Arts are for the stuffy noses of the Liberal Party, not Labor, a bit like $3000 bottles of Penfolds Grange. Just sipping, just browsing and then walking the halls of the NSW Art Galley.
Oh and dear me Gough Whitlam in his day tried to step up and he bought a Jackson Pollock, for Australia named Blue Polls.
Talk about Money. $6 million it was. Oh, men and women of Australia where did your money go, as it was liberally spent on a painting. It must be up near $80 or 90 million today.
The arts are the spiritual side of life and being of the spirit when money is short like most times andthe nation is in debt the money is pulled from the Arts. The money is pulled out of the arts. Has anyone followed the story, or the continuing story of the saga, or whatever of the Sydney Opera House. Opera is for the high flyers of Art and the Sydeny Opera House it is a wonder it is there at all with the money that was pulled out of its construction, by the NSW government. Corners were cut, and then cut again, and then more money was pulled out of it, poor thing.
The Arts needs money at the reverse end, the regional end where the regions are in the country.