Bullying, resignations, leaks and conspiracy theories — the Libs have not been providing Scott Morrison with the unity he's been craving.

As we had been previously, under the former government, we will provide the stability and the unity and the direction and the purpose that the Australian people expect of us as leaders about party and those of our great nation.

Thus spake Scott Morrison a few hours after a coup d’etat had delivered him to the office of Prime Minster of Australia. Of course, every beneficiary of a leadership spill says that. They have to. But the reality that Morrison faces was perhaps better signalled by the text to Alice Workman, apparently sent by a Dutton supporter within seconds of the Morrison’s victory in the party room: “it is not over, fight continues, fuck Scott”. 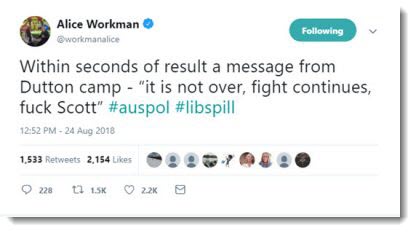 Inspired by this, Crikey has compiled an incomplete list of the remarkable level of unity that getting rid of Malcolm Turnbull has inspired in the liberal ranks.

Turnbull left a hand grenade in his office for whoever took it from him; alluding to intimidation and bullying that had apparently been used to get the signatures required to hold a spill in the first place.

Within five days, backbencher Julia Banks — the only MP to actually win a seat off Labor in the last election — offered her resignation, citing bullying. Then senior liberals did themselves just a tonne of favors in their response. Victorian Liberal president Michael Kroger dismissively said, “This is politics. People speak strongly. People raise their voices”, while Craig Kelly suggested Banks ought to just “roll with the punches”.

Turnbull’s deputy Julie Bishop resigned from the front bench and, giving the hard right of her party a taste of their own medicine, used her first speech as a backbencher to complain of the “appalling behaviour” she had seen in the lead-up to Turnbull’s offing.

Meanwhile Sarah Henderson revealed on Four Corners that she had turned down a ministry position — in return for backing Dutton — and former industrial relations minister Craig Laundy knocked back a portfolio offer from the new leadership team.

The leaking against the new government (and counter leaking against its enemies) started almost instantly. Peter Dutton’s mysterious intervention in the the detention of two au pairs in 2015 had provided a background hum of controversy for some time, and within four days of the change of leader, a third au pair intervention was suddenly revealed to The Guardian.

Meanwhile, a WhatsApp text thread was acquired by the ABC and read out by Barrie Cassidy on Insiders, which revealed the machinations of the leadership spill that resulted in Bishop not receiving a single vote from her fellow Western Australians.

Then there were the leaks to the Herald Sun, detailing the $7.6 billion in infrastructure spending Turnbull had planned to get the Liberals re-elected. This was followed the next day by the $4 billion he’d set aside to make peace with the Catholic school sector.

Today, we had the bizarre revelations that in the lead-up the leadership ballot, Dutton supporters apparently entered Liberal MPs’ offices, threatening their future preselection chances and refusing to leave until they signed their spill petition. The irony of using hippie “sit-in” tactics to get your race-baiting hard man super-cop candidate elected was not lost on the Crikey bunker.

And just to prove Julia Banks was not subjected to any bullying, she was subjected to damaging leaks this morning. A “confidential” internal report alleging Banks had mistreated campaign workers during her tilt for the seat of Chisholm found its way into the hands of John Ferguson at The Australian, something that presumably won’t have any impact on people’s decisions to come forward in the future.

Concetta, Tony and the gang

Dignity expert and the most effective opponent the Liberal Party has ever faced, Tony Abbott, was offered the politically expedient role of “special envoy for Indigenous affairs”, and took several days to ostentatiously decide whether it was worthy of him, before the personal assurances and pleas of radio host Ray Hadley convinced him.

Meanwhile, Senator Concetta Fierravanti-Wells showed a quite elephantine nerve on Patricia Karvelas’ National Wrap. Having backed the Dutton insurgency and quit her ministry at the most damaging possible time for Turnbull, she alleged that the ascension of Turnbull’s favored replacement was actually a long planned conspiracy. Those who voted in Morrison had to “explain themselves” she said, outloud, on television.

Not to mention Prime Minister Morrison literally referring to the events of the spill, in which he was a lead participant, by saying “The curtains have come down on that Muppet Show”.

Which only really stokes curiosity as to which participant is which Muppet.

Morrison might be Beaker as most everything he says is senseless drivel, though Beaker is far more likable.

Abbott as Oscar the Grouch. Julie Bishop as Big Bird.

That’s sesame st not the muppets. The only crossover characters with those two shows were Kermit and Grover. Turnbull as Kermit perhaps? Morrison as Miss Piggy? Who is Animal? This is fun.

Animal is my favourite character, marches(?) to his own drumbeat (sic!) and is more or less the same colour so he’s gotta be the Beetrooter.
I see Miss Piggy, with her unrequited lurve for the Leader, as Concerta (Mandibles with nod to FDotM).
Mr Shouty would surely be the skandiwegian chef, speaking gobbledegook and making a mess of everything he touches.
Frydembergs could be Scooter, always eager to do (whichever)Master’s bidding.
Kermit was Talcum, an ineffectual titular head of the mob, never able to control his rabid, ratbag raving “team” – he was looking pretty green about the gills towards the end.

The Morrison government is a Keystone Kops film …but with sound.

It’s the the poor man’s Game of Thrones.

It’s amazing that the only smart political action Talcum ever took was to give all that power and the spiffy black SS uniforms in the certain knowledge that he would be unable to resist becoming the Gestapotato, the baton every Qld walloper has in his locker.
Some thought him to be Talcum’s shit magnet – doing the nasty that the base love and alienating anyone with a shred of decency – not so much his spear carrier as spear catcher.

Because both parties and the MSM are captive to the polls this is where the entertainment is going to be between now and the next election. If the polls stay low for Morrison and he begins to freelance with policy and pronouncement toward the centre, the “bitches be crazy” faction will act again.
In the meantime the APS is repositioning itself to show at least a modicum of independence, which will make it harder for the Coalition to operate in their usual manner.