Classic tips and rumours from the year Turnbull seized power

Ms Tips spent much of 2015 keeping an eye on the doings of Malcolm Turnbull. She was right to.

The various writers who have occupied the role of Ms Tips (like Doctor Who actors) have always delighted in sharing the little, seemingly insignificant snippets of information that cross their desks, which quietly and ultimately point to something much bigger. Across 2015, she kept an eagle eye on the doings of Malcolm Turnbull as he built towards his coup d’etat of then prime minister Tony Abbott.

#Malcolmwatch. After he appeared on Q&A wearing a salmon tie (or is it peach? It’s not blue, anyway), we’ve all hyper-vigilant for any sign that Malcolm Turnbull is secretly mounting a challenge to Prime Minister Tony Abbott. Now another tipster is seeing signs of a leadership challenge — Turnbull is paying for Facebook advertising to put his face in more newsfeeds.

While it’s not unusual for politicians to spruik their pages like this, the timing is interesting. Ms Tips thinks Turnbull’s fancy font is very Point Piper, but the Communications Minister tweeted photos of himself on public transport again this morning, to remind us he is a man of the people. 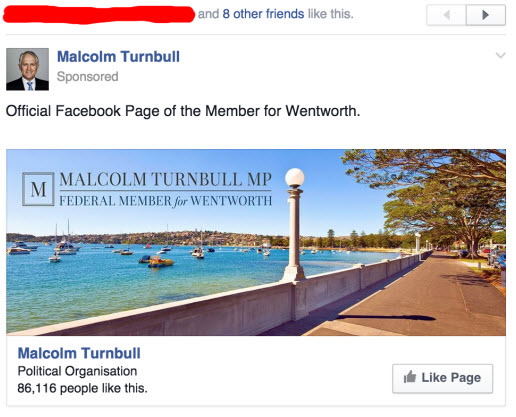 Malcolm for PM? Former Liberal NSW MP and former Liberal Party treasurer and founder of the Millennium Forum Michael Yabsley is spruiking his friend, Communications Minister Malcolm Turnbull, as the guest speaker at his Wombat Hollow Forum next month, and the write-up seems to hint that leadership chatter is not at all put to bed:

Rarely if ever have the life and times of an Australian citizen been so closely scrutinised and so keenly anticipated as that of Malcolm Turnbull.

From scholar to journalist to barrister to businessman to parliamentarian and political leader, the eyes of the nation have been on Malcolm Turnbull for a generation.

All the signs are that the level of scrutiny and anticipation are about to go into overdrive again.

Wombat Hollow, a property in the Southern Highlands, is also known for Yabsley’s bespoke lamps, which he builds himself. Maybe he’s hoping Turnbull will see the light?

While the average reader who spent a day away from the news might have clicked in shock, both were actually links to pieces from 2009, when Malcolm Turnbull faced frontbench resignations over his climate change policy. A Twitter search shows that one of the pieces has been trending on the site off and on for almost two weeks. What could be behind the nostalgia resurgence? 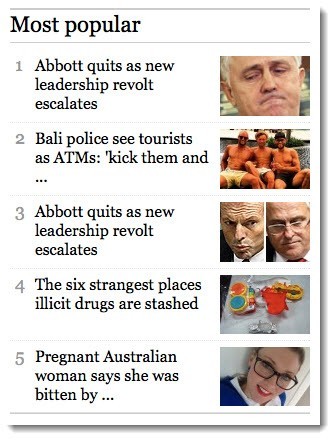 Malcolm changes his mind. Going from opposition into government, however enjoyable, can be rather fraught for politicians because of the sudden reversals that they need to make on policies enthusiastically spruiked or opposed when they were on the other side of the chamber.

Behold Malcolm Turnbull — harsh critic of data retention in 2012 while in opposition, transformed into the lead minister on the introduction of mass surveillance in government. And sadly Malcolm has not merely had to switch policy positions, it appears he’s undergone a sea-change on the efficacy of cost-benefit analyses to government policy. Readers will recall Turnbull was a determined advocate of getting the Productivity Commission to conduct a full-scale cost-benefit analysis of the NBN when in opposition — indeed, he even introduced a private member’s bill to that effect.

Fast forward a couple of years, however, and Turnbull apparently no longer cares for PC assessments: his office has ruled out asking the PC to conduct an analysis of the Trans-Pacific Partnership, despite the chairman of the PC, Peter Harris, calling for such an analysis back in July. Then again, Harris was the reason Turnbull eventually abandoned a CBA of the broadband project after the election — the new minister thought there was an issue with Harris having been secretary of communications when the NBN was being rolled out.

No such problem exists with Harris now regarding the TPP — but for some reason Turnbull prefers the “national interest analysis” of the TPP that will be prepared for the Treaties Committee when it considers the deal. Who’ll prepare the NIA? The very DFAT bureaucrats who negotiated the deal. Makes Harris’s faux-conflict of interest over the NBN look fairly trivial, eh, Prime Minister?