Welcome to Side View — a curated guide to new and overlooked content on politics, policy, and public affairs. This week: surveil your way to riches, the rain falls hard on a poorly planned town, and the return of an old friend.

COMPETITION AND ITS COMPETITORS

Nicholas Gruen delves deep into what our economic reform priorities should be in an age of scandals, misconduct and deeply flawed markets while John Quiggin concludes our financial system is so broken it won’t be fixed without another financial crisis. Also, the downsides of competition: how the clash between Protestantism and Catholicism correlates with the European witchcrazes. Elsewhere, Donald Trump discovers News Corp’s view of South Africa, so here are some facts about “land seizures” there.

WITHIN GOOD AND EVIL

Listen, America, Martin Luther King Jr was an angry radical socialist, not the benign equality-dreaming myth used by capitalism to sell crap and while we’re on religious activists, how Christian missionaries spoiled British imperialism — which was presumably previously wonderful — in 19th century India … and how Nietzsche was saved from, and then stolen again, by Nazism. By the way, if you’re ever interested in Nietzsche’s approach to Socrates, I wrote a rather fine essay in third year on it. 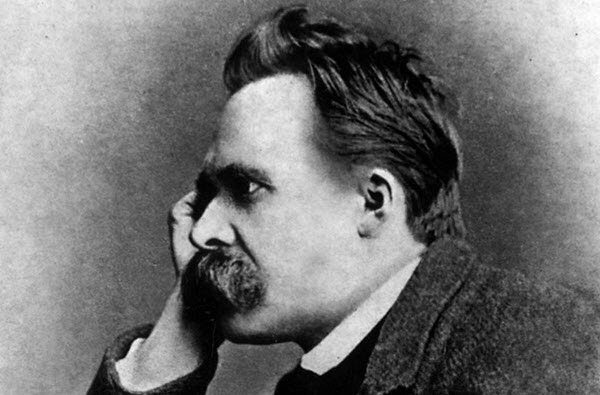 With the video surveillance market alone now worth $44 billion a year, the push to monetise our march toward total surveillance will keep growing stronger despite the constant evidence of how utterly clueless AI can be (the Twitter thread from people with vaguely salacious names is hilarious — and yes, Internet of Shit is on it). Oh and the Internet of Shit is now officially a security risk: the FBI recently issued a warning about it. You have officially Been Warned.

HOUSTON, YOU HAVE A PROBLEM

The city of Houston faces a major flooding threat – and it’s not due to climate change but poor planning. Even so, we know the dangers of the level of atmospheric CO2 continuing to rise (well, unless you’re a Coalition MP) but what happens when it starts falling? That too poses some existential problems for humanity, but luckily we have around 200 million years to prepare for it or, more likely, to pretend it’s not happening. And while we’re on suns, a new experiment seems to rule out an alternative explanation to dark matter, that gravity works a bit differently at cosmic scale. Now if only someone could find some dark matter …

Sobering news: while some health organisations continue to claim there’s an “alcohol epidemic” and that alcohol is a “pernicious drug” peddled by an all-powerful industry, I’ve been pointing out for years that it’s garbage, and the most recent ABS data on alcohol consumption proves it yet again: Australians are drinking less than at any time since Menzies was PM and the six o’clock swill held sway. 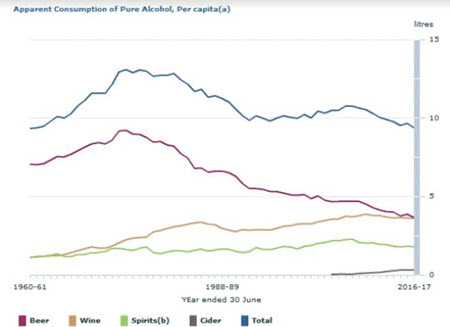 And why? Because previously weekly drinkers are drinking less than weekly, and the level of abstainers is the highest ever recorded. Cheers. 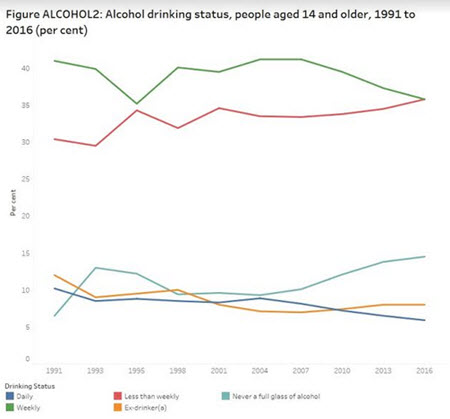 Is our system of funding the arts broken? And, um, gender quotas for nudes, anyone? Which prompts the question: do we need full diversity in nudes? If not, why not? And Marlee Jane Ward fires up on harassment in lit culture.

For old-school Crikey readers who miss our famous Flying Heap of Crap Watch series, here’s the latest way the Pentagon is hiding major flaws in the F-35: reclassify the problem. Hopefully that doesn’t extend to collapsing landing gears or to its vulnerability to lightning.

Drink deep or taste not the Pierian Spring

Maybe the data on alcohol shows that campaigns to curb its abuse are effective. Like many things, alcohol is not a problem – until it is. And then it really is. Personally, I am grateful for all those reminders, by governments and others, that sensible drinking is not an option for everyone.