The ABC is rolling out a new staff recognition system in the hopes of bolstering the 83% of employees who reportedly feel undervalued.

The ABC has embarked on another cringe-worthy attempt to improve the dismal view staff have of its management, offering prizes and events for staff who “demonstrate the ABC Principles”.

In an email to staff on Tuesday, managing director Michelle Guthrie introduced a new “recognition program” where staff will be able to nominate “an individual or team who demonstrate the ABC principles and deserve acknowledgement for their outstanding work”.

The “recognition” includes the “opportunity to attend industry events, go behind-the-scenes at different ABC productions, attend a celebratory event in Sydney, and receive other great products such as Google headphones.”

The best employee awards don’t have a name yet, and the ABC is also running a staff survey on the name, with the suggestions of: “PROPS (Peer Recognition of Outstanding People, it’s our way of saying ‘props to you’)”; Aunty Awards; Kudos; or, the Gunstons — “inspired by Norman Gunston, a beloved ABC fictional character and the only fictional Gold Logie award winner in Australian television history”. 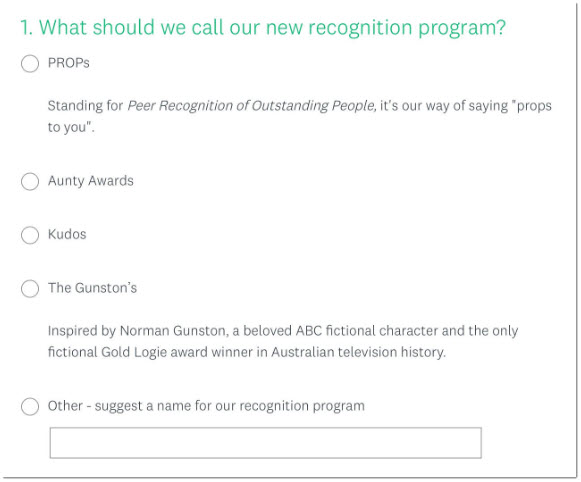 As well as the awards, the email includes a “recognition toolkit” for managers that includes tips for managers on how to build a culture of recognition (or, just be reasonably thoughtful of the staff you manage). Some suggestions include sending emails to employees when they’ve done a good job, and acknowledging staff birthdays and new babies, as well as building a “genuine connection with your people through showing them the ‘real you’ and creating meaning at work”.

And that’s not to mention templates for ABC-branded “recognition thank you cards” that can be downloaded from the ABC’s intranet. “Use these whenever you like as a practical way to make each other feel valued,” the email suggests. 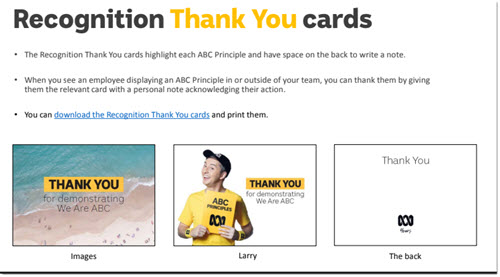 And if you’re wondering what these “ABC principles” are that could win staff some Google headphones, they were helpfully laid out earlier this year in another cringe-worthy corporate effort, this time via video. The video features a character called Larry, who features in some of the card templates.

The “principles” include “We are ABC”, “straight talking”, “people focussed”, “accountable” and “open and transparent”.

“I am incredibly proud of the work you do every day. The high levels of trust we enjoy from our audiences is a tribute to the talent, dedication, and high-quality work of our teams right across the country and the world,” Guthrie wrote. “This program is for the entire organisation and is an opportunity for us to celebrate each other’s achievements.”

Do you think the ABC’s new employee awards system is a good idea? Let us know at [email protected].

building a “genuine connection with your people through showing them the ‘real you’ and creating meaning at work”. A genuine connection does not require a email and trinket fest by management.
Pathetic betrayal when she should fighting these cut backs tooth and nail, the ABC has far ranging support in the community across all demographics. Neither side of politics has more broad support.
Staff watch on as pissweak management fuckers capitulate time and time again to government pressure, that is the root of poor morale.
The board needs to resign and be replaced by people interested in maintaining this Australian institution.

Indeed, I’d like to suggest a name for the new recognition programme: Puerile.

One imagines Don Watson is making a grab for his smelling salts on reading of Guthrie’s latest attempt at corporate gobbledygook. Hasn’t ABC management more pressing things to do than to award fatuous – &, frankly, insulting – thank you cards??

One suspects Guthrie has been reading the Corporate HR journals, and has found that it has become de rigueur among HR management graduates to impress the board by instituting ’employee recognition’ programs such as these. The impetus derives from the annual corporate employee surveys that are more logistical trouble than they’re worth (although they DO provide an opportunity for employees to vent). Guthrie’s version will prove to be as naff as are most, and will be (secretly) scorned as the grownups try to get on with their work.

First party to promise a return to real funding levels and staffing at the ABC along with axing Guthrie and her cronies will win the next Federal Election in a walkover.

Dis-Guthting.
What abiut the “The Sylvester Awards?
Looney Toons management – what does that say to all those that didn’t “qualify”?

Good generals lead their troops when they’re being attacked. If I were at the ABC, I would not feel confident I was getting all the support I needed.