A migration scheme that encourage new arrivals to move to rural and regional Australia has existed for decades. But try telling the papers that.

Last week, The Australian reported on the Morrison government’s “new” plan to require some migrants to settle in regional Australia. The Oz found this story spicy enough to splash across its front page last Wednesday. But for all the news value of this announcement, it may as well have read “Scientist discovers bread”.

This was noted in classic “presented without comment” style by Daily Telegraph editor Christopher Dore, who tweeted his paper’s front page from May, with wry use of the auspol hashtag. 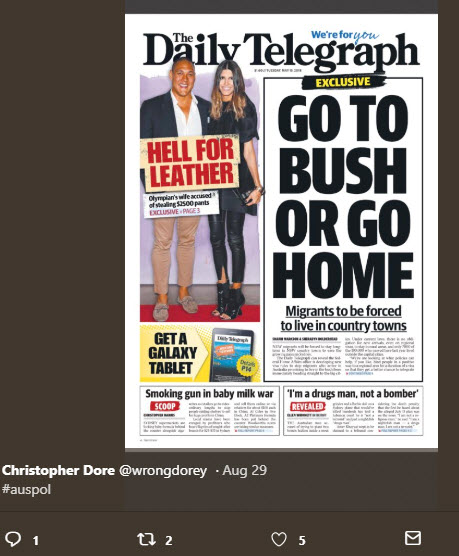 How many times can the government announce the same policy of encouraging new arrivals to go bush? A lot of times, as it turns out. Crikey has a quick look back at a quite old policy that has somehow managed to remain a front-page headline for years.

Migrant support groups say it would be deeply unfair to force some new arrivals to stay in regional and rural areas.

Yesterday it was revealed that the Turnbull Government was contemplating changes to regional skilled visas, which would bind migrants to rural areas for a set period of time.

Migrants will be redirected out of Sydney and into regional areas under a Turnbull government plan to help ease the capital’s house price crisis.

The Deputy Prime Minister, Barnaby Joyce, has offered support for the rollout of more refugee programs in regional areas.

Mr Joyce wants the refugee resettlement model trialled in northern New South Wales to be replicated in other country towns.

IMMIGRANTS and refugees wanting to call Queensland home will be required to live in regional cities and towns to alleviate future growing pains in the southeast corner.
The Courier-Mail can reveal the Newman and Abbott governments have begun initial discussions about developing a quota system aimed at funnelling new arrivals into cities such as Cairns, Townsville and Rockhampton to promote growth.

You get the idea. There’s been a program — the Regional Sponsored Migration Scheme — in place since the mid-1990s. As noted on the Parliament website:

The Regional Sponsored Migration Scheme (RSMS) is a key component of the push to attract migrants to regional areas. Introduced in 1995–96, it enables employers in a designated RSMS area to nominate temporary residents already in Australia or applicants from overseas, to fill skilled vacancies for a minimum of two years. Successful nominees who are prepared to settle in these regions are able to apply to migrate permanently to Australia.

So how will migrants forced into such towns survive? Will they all be on the dole? How will that play out politically?

Many of thee people are skilled migrants who do things like run medical and dental practices and provide technical services like engineering and design and IT.

With the ‘post-work’ era looming, there are interesting challenges ahead for Australia. Here’s a thought bubble. In a world where a universal basic income is the norm for half our population, people will still need services and housing, but what they won’t need is proximity to major work centres. This means the government of the day could ‘encourage’ people who wish to live with a UBI and social housing to live in towns removed from major centres. Its less expensive to build housing and there’s easier access to leisure and new experiences. Paradoxically, it would also create work for those who wish to, to service these communities.

Sounds ideal.
Bob Hawke tried to do something similar in the first days of the 83 term with dole farms but the social conservative unions went nutz and the idea disappeared without trace.

What the world is facing in the next 15-30 years is unprecedented. We’re already seeing the first signs with so many under employed. As AI takes over literally millions of jobs will go and society will change forever. UBI type systems will have to be introduced. This is not like the dole with all its associated stigmas, the UBI and a home will be ‘no questions asked’ handouts as a measure to maintain social cohesion. Again, paradoxically, it’ll be business which will demand it, so as not to go broke. Already there’s discussion in Europe of funding it through increased business taxes based on job losses caused by automation (the opposite of the current tax breaks for business investment in automation).

If only there were some vital infrastructure needed beyond the Sandstone Curtain such as the Snowy scheme which employed many thousands of post WWII immigrants without even a common language (except maybe German), produced something of great benefit and set them up with a nest egg, new language and a sense of achievment.
Little things like, I dunno, an Inland rail from Melbourne-Brisbane.

Wasn’t there some magnate in the 1950s who suggested creating ocean inlets or huge rivers to bring ocean water into the Australia outback – using nuclear explosive technology of course.

That was Rhinohide’s dad, Lang Hancock.
Who was such a patriot that he didn’t breathe a word of his planes’s compass malfunction over the Pilbara until he’d secured mining leases.
Iron ore was at the time thought to be rare in Oz and export prohibited – hence pig iron Bob who was willing to send melted scrap to Japan.

Unless there are major advances in AI, prostitution will be one of the few growth “service” industries, along with private security to protect those with something worth stealing.