The ABC has had its websites and apps blocked in China, with the Chinese government stating that the country's rights "shall be maintained towards some overseas websites violating China's laws and regulations".

ABC website blocked in China, KAK’s back, CBD gets a makeover, and other media tidbits of the day.

Access to the ABC site stopped the day after the Australian government announced rules that would block two Chinese telecommunications companies from participating in the roll-out of the 5G infrastructure network. The decision, primarily affecting tech giant Huawei, was a major blow for the company and prompted China’s Foreign Ministry to urge Australia to ‘abandon ideological prejudice’. But official sources in China’s government say it is unlikely the Huawei decision prompted the censoring of the website.

KAK returns to small screens. Troubled morning program Studio 10 has announced that Kerri-Anne Kennerley will join the program for two days a week as a co-host. It’s a return to the Ten Network for Kennerley, who hosted Good Morning Australia on Ten for 11 years. She joins the panel as the program faces struggles with falling ratings, and off-screen drama including an unfair dismissal case involving former executive producer Rob McKnight, and hosts Ita Buttrose, Jess Rowe and Denise Drysdale all leaving (or, in Drysdale’s case, a lengthy “holiday”).

Kennerley will be behind the desk on Mondays and Tuesdays.

CBD moves up for SMH. CBD, the long-established financial gossip column in The Sydney Morning Herald has had a promotion, a face-change and a new author. The column was started by John Alexander when he was finance editor of the paper, and ramped up when he was editor-in-chief. A feature of the Herald’s finance pages for well over 30 years, it’s become something of an afterthought as its business pages have been reduced in recent years.

But today it’s moved from its vicarious position to the top of page two, with a new look and a new compiler, journalist Kylar Loussikian — a recent hire for Fairfax from Sydney’s Daily Telegraph.

The content was all very political, and a little birdie around the Fairfax nest reckons it’s an attempt by SMH management (overlord and future head James Chessell) to get a daily column in the news section of the paper with some acerbity when it comes to politics (with the odd business item). It could even be that the SMH wants a column along the lines of Rear Window in the Australian Financial Review. It is a small world at Fairfax Media, a very narrow church. — Glenn Dyer

The “most read” newspapers. It’s not unusual for Australia’s media outlets to spin ratings, viewer, listener and readership figures in a way that looks like they’ve won. And so it is in today’s newspapers. The Australian is the nation’s most-read “weekday national newspaper” according to EMMA data (in a market of The Australian and the Australian Financial Review). 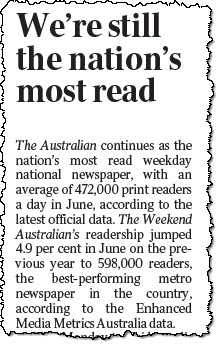 The Sydney Morning Herald, meanwhile, is the best-read masthead, as its page-two story read today: 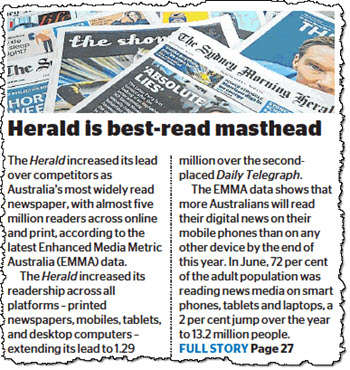 The rights that stop a nation. The Ten Network has reportedly nabbed the broadcast rights to the Melbourne Cup. In another deal in a series of rights switches, The Australian reports that Ten has won the rights from Seven, which has broadcast the Cup since 2002. Seven will broadcast cricket for the first time this summer, which had previously belonged to Nine, while Nine has taken the tennis from Seven.

It’s all about placement. Saturday’s Age could have done with a look-over before it went to print. The travel ad-heavy edition ended up with an ad for Cambodian holidays right next to a story about the outrageous jailing of Australian filmmaker James Ricketson in, you guessed it, Cambodia. 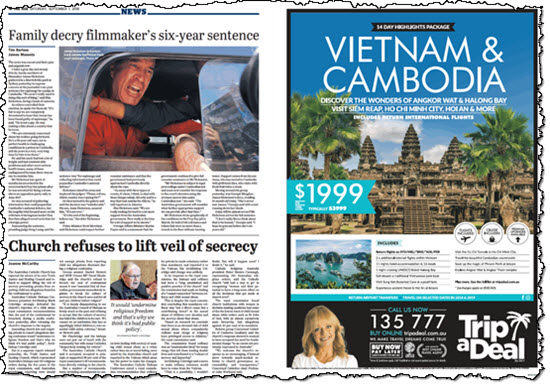 Glenn Dyer’s TV Ratings. Nine’s night easily, with Seven a distant second, the ABC third and Ten trailing in the dust. The Block had 1.71 million nationally, number one in the metros and regions. 60 Minutes helped with 1.13 million and Nine News chipped in with 1.53 million. On Fox League on Saturday, 400,000 people watched the Gold Coast Titans play the North Queensland Cowboys. The Cowboys won, giving the legendary Jonathon Thurston a victory in his last NRL game and probably the highest-ever TV audience for an NRL game on pay TV. Nine broadcast the Parramatta-Easts game which managed 493,000 national audience. Read the rest on the Crikey website.

“official sources in China’s government say it is unlikely the Huawei decision prompted the censoring of the website.”
I don’t believe them.

Another totalitarian regime doing all it can to silence our ABC …. the bastards…..